[Report File] It is an accident that needs to be settled, not the mayor. 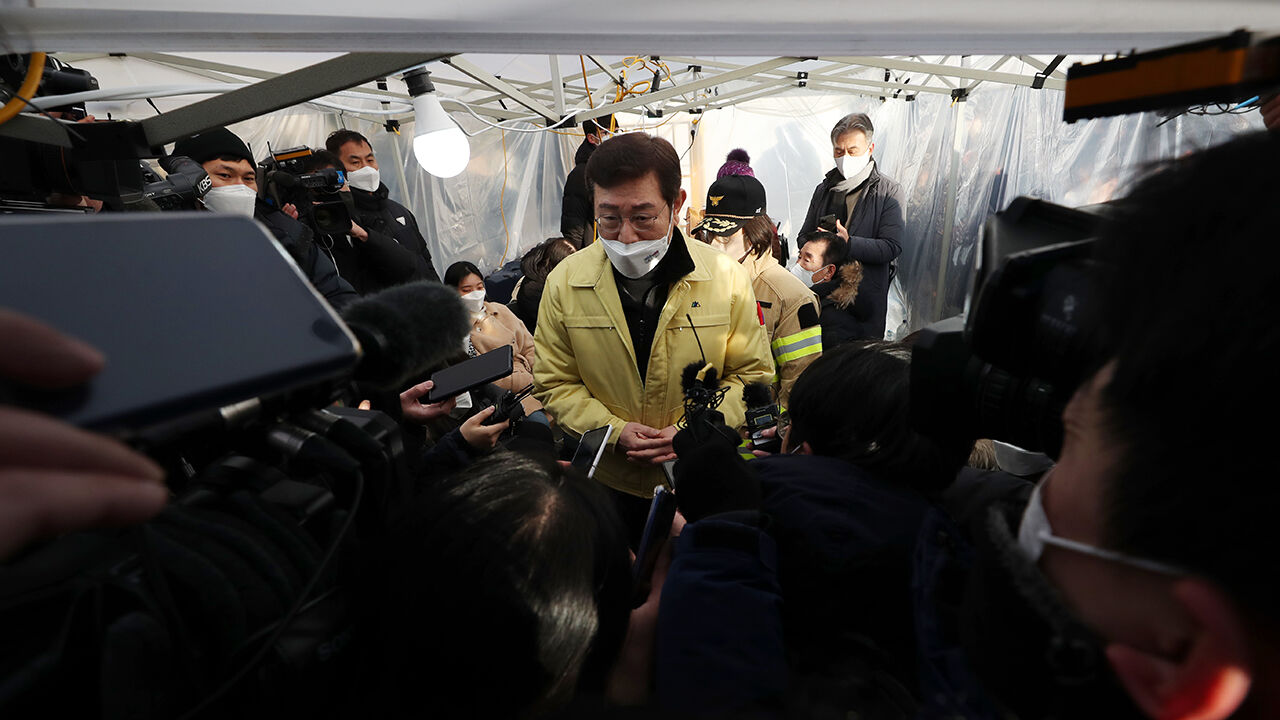 I have been guarding the site of the Gwangju apartment collapse accident for nearly a week.

The site is still dangerous.

Just a few days ago, strong winds caused the debris to fall, which forced field crews to halt searches and withdraw seven times.

A firefighter official who entered the scene said, "The level of danger inside the building cannot be confirmed." "There were cracks in the ceiling and floor."

It's slow, but safety comes first.

The work is being carried out while taking various safety measures at the same time by holding a meeting of the advisory group, such as building structure and demolition.

The families of the missing are also calmly waiting, saying that there must be no other sacrifices due to excessive rescue operations.

By the way, there was a brief 'happening' during the on-site briefing the other day. After the briefing, a reporter from a media asked a question to Gwangju Mayor Lee Yong-seop, the head of the accident management headquarters.

Q. I have no idea how far the rescue dogs can enter from the 22nd to the 38th floor and how many floors are being searched. I'm doing a search...

A. Then you do this. I've also been to the 39th floor, but it's easier to see than to just listen to our story

so I'll set the timing with the fire department, but the media can't go all the way up.

If the media creates a pool and elects a representative, we will guide you through it safely.

* POOL: A slang term often used in the field of coverage, to select an agent to cover as a representative among various media reporters and share the contents of the coverage.

At first glance, it seems like an abrupt proposal that popped up without prior discussion. It was a bit of a stretch, but it seemed like Mayor Lee Yong-seop's 'reciprocity' followed by a question that one might be curious about. In response to another question asking, 'Isn't the building stabilization plan set up too late?', Mayor Lee

"Once you go up and see it, please ask me that question."

At 8 a.m. the next morning, Gwangju City said,

He announced that they would select five representative reporters to enter the collapsed building and cover the story.

Not only general reporters, but also video and photojournalists had to elect their own representatives.

Reporters from dozens of media outlets guarding the scene gathered.

What were our thoughts?

Half want to go inside the collapsed building and check the scene, half worry that it might interfere with the search operation or be dangerous.

Even myself, the moment I put my business card in the lottery box and waited for the prize, I was very nervous.

'Inside the building' was ultimately 'failed'...

However, within an hour of forming the representative group, the reporters' entry into the site was "cancelled".

The city of Gwangju

explained the reason to the reporters, saying,

"There was a final conclusion from the fire department that there was no delay in preparing for the crane dismantling and stabilizing the building ."

Simply put, the investigation inside the building interferes with the resolution of the accident.

The situation in Gwangju as well as the reporters is getting hotter.

It only added confusion to the scene.

The city ​​of Gwangju said,

"After the tower crane lifting work is completed, we will discuss with the fire department and push forward again soon.

As a result of inquiring with the city of Gwangju, it was revealed that some media had requested to go inside the building and report on it.

According to this, the city of Gwangju has already been reviewing plans and timing for coverage inside the building.

However, during the briefing on the afternoon of the 19th, it was revealed that Mayor Lee Yong-seop's proposal to cover the inside of the building was not included in the preliminary manuscript or planned.

It's a busy spot just to fix an accident...

The building collapsed in the midst of building an apartment for hundreds of people to live in.

One worker has died and five are still unknown.

Gwangju Mayor Lee Yong-seop, who is in charge of the accident management headquarters, described the accident as "a site we have never experienced before."

Rescuers are risking their lives, continuing the search operation for over 12 hours each day.

Even after completing the search for the missing person, it will take quite a long time to properly resolve the accident.

It has not been decided whether the apartment will be demolished or the construction will be supplemented.

Not only the nearby merchants who have lost their place of living, but also local residents and prospective tenants are suffering a lot of damage.

I hope that there will be no more 'remedies' of the mayor, who are busy on the job site, just by rectifying the accident.