“Forge large enemy forces”: how participants in the Vyazemskaya landing operation fought in the Nazi rear for almost six months

80 years ago, the Vyazemskaya airborne operation began - one of the largest during the Great Patriotic War. According to historians, the main task of its participants was to promote the advance of the main forces of the Soviet troops in the direction of Vyazma, disrupting the communications of the Wehrmacht in the rear of the Nazis. Although, according to experts, the goals of the operation were not fully achieved, the paratroopers managed to pull back large enemy forces and inflicted significant damage on the Nazis. 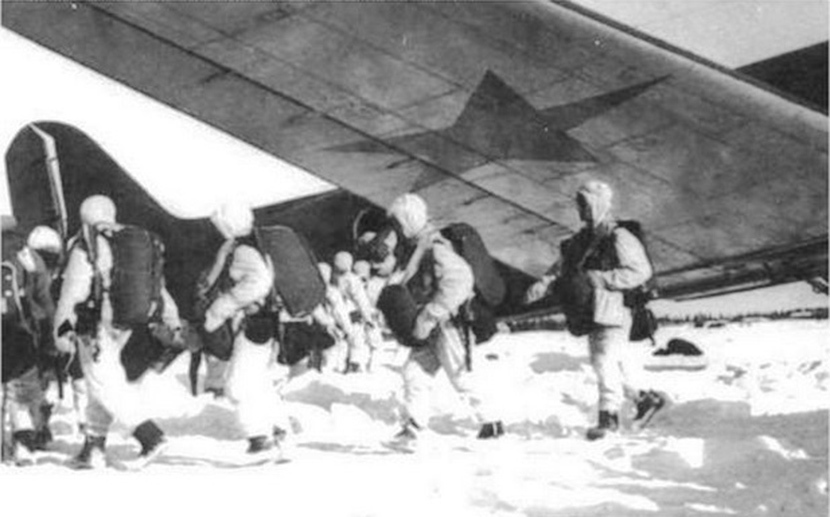 On January 18, 1942, the Vyazemsky airborne operation began - one of the largest of its kind during the years of World War II.

Despite the fact that due to the haste in its preparation and severe weather conditions, it immediately did not go according to plan, the paratroopers were able to pull back large enemy forces and cause significant damage to the Nazis.

Preparing for the operation

According to historians, at the beginning of 1942, the situation near Moscow was difficult for both the Nazi forces and the Red Army.

The Nazis were bled dry and demoralized by the major defeat they suffered at the end of 1941.

It was not easy for the Soviet troops, exhausted by the intensive offensive, which lasted about a month.

The greatest successes were achieved by the units of the Western Front, which in different sectors advanced to a distance of 100 to 300 km.

Parts of the 10th Army and the 1st Guards Cavalry Corps broke through the furthest.

The Soviet troops had the opportunity to reach the city of Yukhnov with further advancement to Vyazma, to the most important communications of the Nazi Army Group Center.

To assist the main forces of the Red Army, moving along the Warsaw highway, the Soviet command decided to land troops in the rear of the Nazis.

Its participants were tasked with cutting off the road between Medyn and Gzhatsk, capturing the Myatlevo station and depriving the German troops of the possibility of retreat.

To participate in the landing, groups of paratroopers and the 250th airborne regiment (in a number of sources it appears under the name of the 250th separate rifle regiment, according to its former name), which was supposed to land at the airfield near Bolshoi Fatyanov, were allocated.

The amphibious assault began on January 4, 1942.

The parachute detachment - fighters of the battalion of Major Ivan Starchak - landed in the Bolshoi Fatyanov area and captured the airfield.

The description of further events varies depending on the source.

According to one version, the battle for the airfield dragged on, so the planes with the soldiers of the 250th regiment could not land on time.

According to another, the airfield was captured quickly, but the sending of aircraft with the main forces of the Soviet detachment was canceled due to a snowstorm.

Major Starchak's paratroopers were ordered to move on to independent action. The paratroopers captured the Myatlevo railway station and destroyed two echelons with Nazi military equipment there. Later, in the most difficult conditions, they fought with the Nazis south of Medyn. On January 19, 1942, the remnants of Starchak's detachment united with units of the 43rd Army near the village of Nikolskoye.

Destroying ice crossings for German vehicles, Major Starchak received severe frostbite on his legs. When he was taken to the hospital, the doctors insisted on the complete amputation of his legs to save his life, but the paratrooper refused. Then the major's wife was taken to the hospital by plane, who persuaded him to agree at least to the amputation of his toes and heel bones. Despite the injury, Starchak later continued to serve in the airborne units and, contrary to the prohibition of doctors, jumped with a parachute.

Despite the fact that the landing of the main landing forces failed, Starchak's fighters inflicted serious damage on the Nazis and provided tangible assistance to the advancing units of the Red Army.

Some historians count the beginning of the Vyazemsky airborne operation precisely from the actions of Starchak's paratroopers, however, in most sources, the official start of the operation is associated with the events that occurred two weeks later.

In mid-January 1942, Soviet troops continued successful military operations in the direction of Vyazma and Yukhnov, forcing the enemy to retreat and leave one settlement after another.

To facilitate the advancement of the main forces of the Red Army, the Soviet command returned to the idea of ​​landing a large landing in the rear of the Nazis.

The paratroopers were supposed to cut the highway from Vyazma to Yukhnov and the Vyazma-Bryansk railway, assisting the main forces of the Western Front, surrounded by the Yukhnov group of Nazis.

To participate in the operation, it was planned to involve the 250th airborne regiment, as well as units of the 5th airborne corps.

According to historians, the scheme of the new landing remained the same, which was planned to be implemented in early January.

The paratroopers were supposed to capture the airfield (this time Znamensky) for further landing on it of the starting team and the main landing forces.

Early in the morning of January 18, 452 paratroopers of the 201st airborne brigade were thrown out near the village of Zhelanya.

Most historians call this event the beginning of the Vyazemsky airborne operation.

Due to bad weather, the landing had to be cancelled.

It was continued only a day later.

By the morning of January 19, there were already 642 Soviet paratroopers in the area of ​​​​the village of Zhelanya, who had established contact with local partisans.

Due to the inability to occupy the well-fortified Znamensky airfield, the paratroopers, together with the partisans and residents of the nearest villages, began to independently clear the runway at another airfield.

Since January 20, she began to receive planes.

Despite difficult weather conditions and enemy bombardment, in three days they managed to land about 1,100 soldiers of the 250th regiment, two 45-mm guns, 34 mortars and 11 anti-tank rifles.

Part of the paratroopers began combat operations without waiting for the landing of the main landing forces.

One of the companies cut the Vyazma-Yukhnov road, captured an enemy convoy and repelled several attacks by the Nazis, who were trying to unblock their communications.

The Soviet command set the task of the paratroopers to capture the village of Klyuchi and Znamenka, as well as to block the movement between Yukhnov and Vyazma with all their might.

However, the task was only partially achieved.

The road in several places came under the control of the paratroopers, but they failed to take the well-fortified Znamenka.

A few days later they linked up with units of the 1st Guards Cavalry Corps.

Since the task of encircling the Vyazma and Yukhnovskaya Nazi groups was not completely solved, the Soviet command decided to continue the airborne assault.

For this, the 4th Airborne Corps was transferred to the operational subordination of the command of the Western Front.

In the 20s of January 1942, thanks to the successful actions of the 1st Guards Cavalry Corps, the troops of the 33rd Army and other Soviet formations, the main forces of the German Army Group Center were under the threat of encirclement.

The fighters of the 4th Airborne Corps were to ensure the final encirclement of the enemy, blocking his ability to retreat to the west and receive reinforcements.

At the same time, as military historian Sergei Perelygin told RT, against the backdrop of a rapidly changing situation at the front, the preparation of a new landing took place in a hurry.

“The meaning of the actions of the paratroopers was to finish off Army Group Center and deprive the Nazis of the opportunity to create a springboard for a new attack on Moscow.

However, our troops experienced an acute shortage of heavy aircraft, plus at that time the weather conditions were very difficult, ”added military historian Grigory Popov.

According to historians, a new phase of the landing began on 27 January. As Sergei Perelygin noted, the process was slow, part of the troops were thrown away from the designated areas due to difficult weather conditions and pilot errors. Part of the paratroopers came under the control of the 1st Guards Cavalry Corps, which, together with the 33rd Army, was able to surround the Yukhnov Wehrmacht group. However, due to the exhaustion of forces, the Soviet troops could not hold the encirclement for a long time. In early February, the Nazis were able to break through to their main forces. As a result, Soviet cavalrymen and paratroopers were surrounded. The Soviet command decided to continue the landing.

In February, more than 7,000 soldiers from two brigades of the 4th Airborne Corps were landed east of the Ugra station.

However, due to the strong dispersion, the collection of troops was slow.

The offensive of the main forces of the Red Army in this direction at that time stopped.

The paratroopers, soldiers of the 1st Guards Cavalry Corps and units of the 33rd Army ended up deep behind enemy lines and operated there until the summer of 1942.

In late May - early June, an additional landing was landed to reinforce the 1st Cavalry Corps.

According to the memoirs of the Chief of Staff of the German Ground Forces Franz Halder, in June 1942, cavalrymen and paratroopers diverted seven German divisions.

At the end of June, they were able to break through to connect with the main forces of the Red Army.

In total, about 10,000 Soviet servicemen were involved in the Vyazemsky airborne operation, who fought deep behind enemy lines for about five months.

They destroyed up to 15 thousand enemy soldiers and officers.

According to the historian of the Victory Museum Alexander Mikhailov, the paratroopers, diverting the attention of the Nazis, helped the main forces of the Red Army to liberate a number of settlements in the central part of Russia and deprived the Nazis of the opportunity to prepare a new strike in this direction.

The Vyazemsky operation became one of the largest uses of airborne troops in the Great Patriotic War, which gave the Red Army invaluable experience, experts say.

“The operation turned out to be incomplete for reasons beyond the control of the paratroopers themselves.

But she allowed to pin down large enemy forces.

Our troops did not achieve a strategic advantage in this direction, but the Germans could not achieve it either, ”summed up Grigory Popov.