12 places where homemade croquettes are a delicacy

Few bites are more sublime than a well-made croquette. Simple recipe, but not easy -with bechamel sauce and various fillings, although ham is the king; battered in egg and bread... 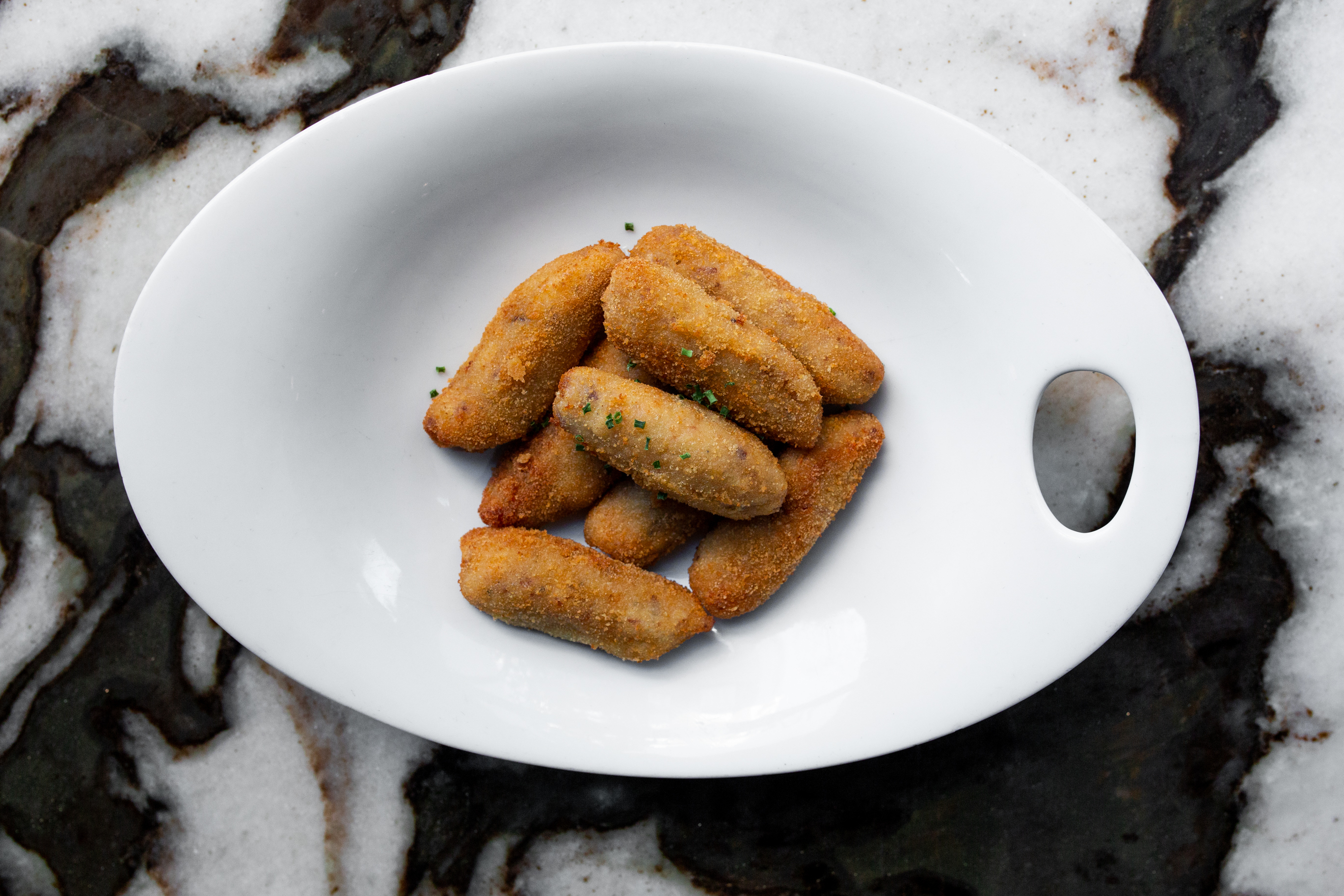 Few bites are more sublime than a

Simple recipe, but not easy -with bechamel sauce and various fillings, although ham is the king;

battered in egg and breadcrumbs and fried in abundant oil-, it is a star tapa in bars and restaurants and, for having it, it even has its

Here are 12 addresses (in alphabetical order) with some of the most desired croquettes in Madrid, which -although they are not our mother's- taste like home.

, in this contemporary restaurant run by Iván Morales and Álvaro Castellanos, they opt for the classic

-made with latxa sheep's milk, which provides an intense flavour- and

Creamy and with a crunchy wrapper, they are a good size (a half portion, 4 pieces, 8.50 euros).

The ham ones can also be eaten at El Jardín de Arzábal, at the Reina Sofía Museum.

Very creamy and made with boiled egg and lacón, they are served in this dining room of Grupo Cañadío (Jorge Juan, 8).

Essential on any self-respecting

They have pork shoulder and egg in two other group locations:

They make cooked meat in

Since its inception, this hundred-year-old Malasaña tavern has served ham, although the offer has grown to offer

on any given pre-Covid Saturday

. Now, with the capacity, not even half, but I'm not complaining, because I always have people," says

dazzled Bono and his group U2

Brothers Ricardo and Mané Romero do not lose sight of their

meat and vegetables of the classic Cadiz stew

After passing them through bread, they put them in the refrigerator for about eight hours so that, when frying them, they do not break.

In the Basque dining room of the brothers

, whose kitchen has just been joined by the experienced

(Goizeko Kabi and Gaztelupe), the star is a fine morsel of

With sheep's milk they prepare a

bechamel to which they incorporate the fish, which "is present in a very balanced way. The result is

Price: 12 euros per serving (six units), 8 euros for the average (four pieces) and 2 per unit.

Those who serve in this macro space of the Retiro -in El Pabellón, La Galería and Los Kioskos- bear the

, gastronomic director of Florida Park, brand new two Michelin stars with his homonymous dining room in Toledo and winner of the best ham croquette Ibérico from the world at Madrid Fusión 2020. The key is that they

infuse the ham bones in milk

, add a little flour and curdle the mixture with gelatin (14.50 euros for a six-piece ration).

In addition, there are

with a spicy touch.

In Quinqué they opt for the ham croquettes.

In this dining room in the Chamartín neighbourhood, which is now three years old, they opt for Iberian ham.

In its elaboration, the Nacho Manzano school is perceived, since its experienced chefs,

(La Bien Aparecida and BiBo Madrid), have passed through some of the establishments of the Asturian chef, such as Casa Marcial, where they met.

And how are your croquettes?

"Although they are made of ham, we give

prominence to the bechamel"

, points out Emiliano Barbero, head of the dining room.

With ham, at El Quinto Vino.

Before Luis Roldán founded this tavern, together with Jesús Vila, he already knew what croquettes he would serve: the same ones with which his

entertained him one day.

More than a quarter of a century later and faithful to that recipe, they have them with ham;

made with a large spoon, of a good size

, as the mothers prepare them", explains Juan Roldán, today the soul of the place.

Fried in extra virgin olive oil, they are tasty, crunchy on the outside and

the inside and with a rich touch of nutmeg (1.70 euros each).

Don't miss out on the tasty morsel with a

that they serve at this updated traditional cuisine establishment, located in Chamartín.

Of "beautiful dimensions", its interior hides a rich bechamel with

, which is wrapped in a crispy batter and topped with a

has no problem revealing the intricacies of his famous Iberian ham croquette, the best in the world at Madrid Fusión 2018. And that is none other than a bechamel prepared with double cream milk; a

and a batter with panko (2 euros per piece). Sometimes he makes them with

. They can be taken in the three spaces of Santerra:

with the stew and the tortilla

, the croquette is an iconic preparation in the career of

, the two souls of this dining room in the Salamanca district that has its pillars in the traditional kitchen and in the first class genre.

Good-sized, with a delicate interior and a fine, crunchy batter, they are made with

And, alternatively and for weeks, they also have chicken and egg (2.20 euros).

And one more croquette: the one that accompanies Carmen's famous stew.

In Viavélez they have them with ham and also with prawns.

's house is a must for fans of Iberian ham and prawn croquettes.

Crispy and golden on the outside

, their interior is creamy and fluid, "so much so that to give them shape we add a bit of gelatin to the dough, which

disappears with the heat of frying"

RECIPESThe Christmas menu by Javier Muñoz-Calero, the chef who cooks with 'conscience'