Exploration of Mars, the docking of "Science" and filming in orbit: the main space events of 2021

The outgoing year 2021 will be remembered for a number of important events in the space sector. The United States and China landed their rovers on the Red Planet, Russia organized the first filming of a feature film in orbit, docked a multipurpose laboratory module "Science" to the ISS and sent tourists from Japan into space. In the summer, the Russians observed the first annular solar eclipse since 1966, and in December the Earth's interplanetary probe Parker Solar Probe passed through the Sun's corona for the first time. 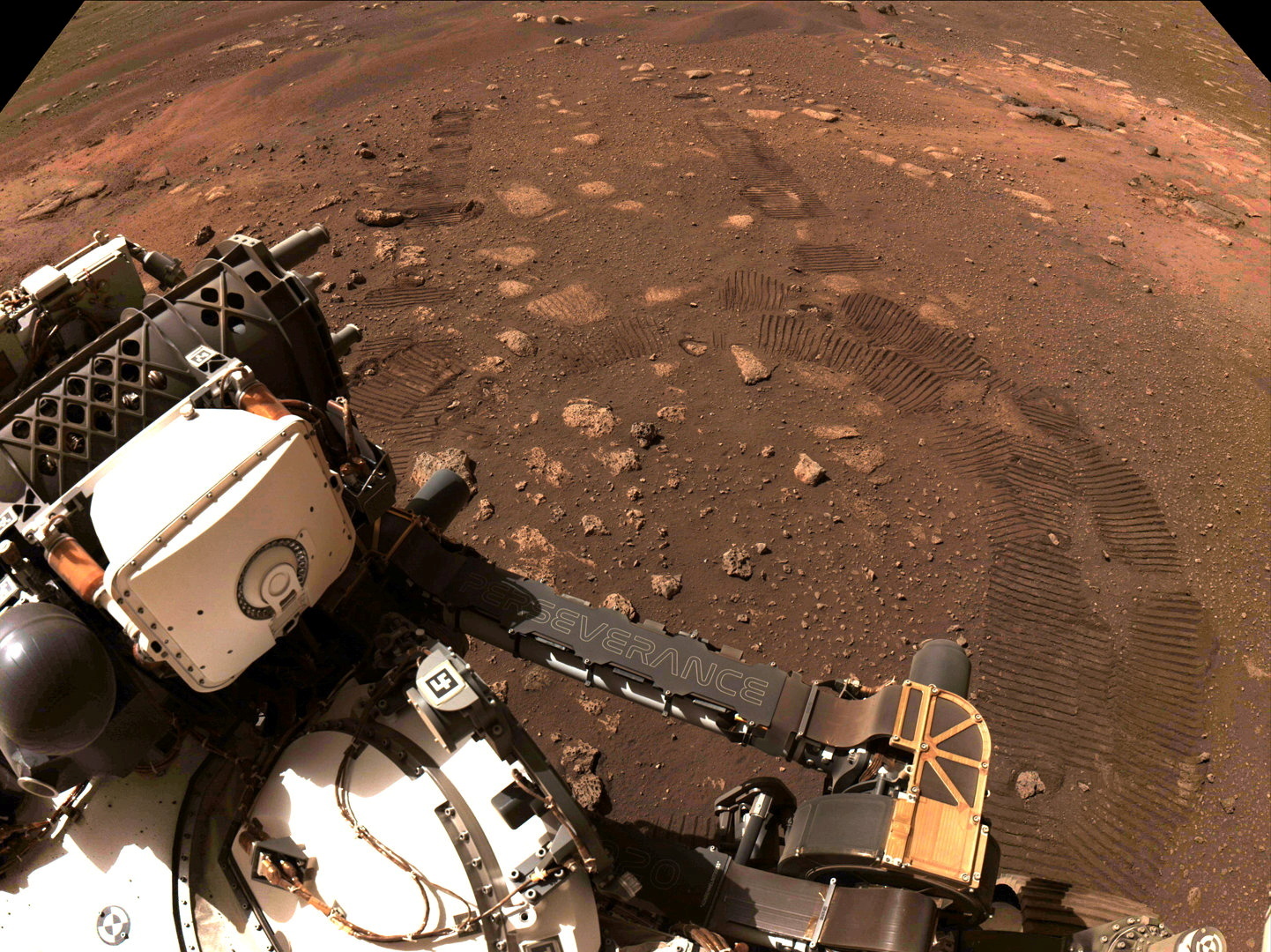 On February 18, NASA's Perseverance rover made a successful landing on the surface of the Red Planet in the vicinity of Jezero Crater.

The agency's plans to create the fifth American rover became known back in 2012.

The device became the successor to the Curiosity rover, which landed on Mars in 2012.

The new device was launched into space in July 2020.

Perseverance is to load rock and soil samples into approximately 40 dedicated containers.

Most of the samples will be taken from Mars in 2026 by another rover, which will be launched into the planet's orbit using a launcher.

Already in the 2030s, NASA plans to deliver the containers to Earth by another device.

In addition, as part of the mission, the first ever controlled flight on another planet was carried out - NASA managed to launch the Ingenuity aircraft into the atmosphere of Mars.

The device took off three meters, the flight lasted about 40 seconds.

Tianwen 1 successfully landed on the surface of the Red Planet on May 15th.

This was reported by the Xinhua news agency with reference to the China National Space Administration.

This event was the first ever landing of a Chinese vehicle on the surface of another planet.

The automatic interplanetary station Tianwen-1 was launched from the Wenchang cosmodrome in July 2020 using the Changzheng-5 launch vehicle.

The device was delivered to the surface by the Chinese Mars rover "Chzhuzhong".

The device arrived in Mars orbit two months before landing, during which time it studied the planet's surface, choosing a convenient place for landing.

Commenting on the Chinese mission, the head of the US National Aeronautics and Space Administration (NASA) Bill Nelson called Beijing an "energetic rival" to the US in space exploration.

For his part, the executive director of Roscosmos for promising programs and science, Alexander Bloshenko, expressed the hope that the Chinese Tianwen-1 mission would complement the agenda of Chinese-Russian scientific cooperation.

The moon covered almost the entire solar disk, leaving only a thin edge in sight.

This phase of the eclipse could be observed by residents of the Canadian province of Ontario, Greenland, as well as Yakutia and Chukotka.

The eclipse began in North America and ended in the Russian Far East.

In most of the Russian territory, particular phases of the astronomical phenomenon were visible.

For example, residents of Moscow could observe how the Moon blocked 16% of the Sun.

She became the oldest person to have traveled to space, and Damen became the youngest.

The ship started in the area of ​​the city of Van Horn and rose to an altitude of 100 km.

The capsule with people, which then separated from the launch vehicle, landed with the help of parachutes.

The launch vehicle also returned to Earth, landing vertically on a special pad.

The flight lasted about 11 minutes, control was carried out in automatic mode.

The Briton climbed to an altitude of 86.1 km in the manned VSS Unity spaceplane, owned by his Virgin Galactic company.

On October 13, the New Shepard successfully completed its second manned flight, which lasted about 10 minutes.

The launch vehicle was launched from a spaceport in Texas.

The device rose to an altitude of over 100 km.

Among the four passengers was the 90-year-old actor William Shatner, host of I Don't Understand, on RT America.

On July 29, at 16:29:06 Moscow time, the Nauka multipurpose laboratory module successfully docked with the Zvezda service module node of the ISS Russian segment.

The launch of the Nauka module to the ISS had been postponed for 13 years before.

The module was launched into low-earth orbit on July 21 using the Proton-M heavy launch vehicle.

The module is designed to enhance the technical and scientific capabilities of the Russian segment of the ISS.

It was created on the basis of the Zarya functional cargo block, as well as using the experience and technologies of creating a supply ship for the Salyut manned scientific stations.

However, this incident did not pose a threat to the crew.

The peak of the meteoric activity of the Perseid shower over Russia fell on the evening of August 12.

One can observe a bright starfall once a year when the Earth crosses the trajectory of comet 109P / Swift - Tuttle.

This phenomenon lasts from several days to several weeks and occurs in the summer.

The name Perseid was obtained by a stream from the constellation Perseus, because when observing the falling meteors, it seems that they fly out from this particular part of the sky.

On October 5, the Soyuz-2.1a rocket with the Soyuz MS-19 spacecraft was launched from the Baikonur cosmodrome.

On board the ship were actress Yulia Peresild and director Klim Shipenko, as well as a professional cosmonaut, Hero of Russia Anton Shkaplerov.

The filmmakers went to the ISS to film The Challenge.

The tape will be the first feature film partially filmed in Earth orbit.

According to the plot, the main character must prepare for a flight to the ISS in a month in order to save a sick astronaut.

Roscosmos, Yellow, Black and White studios and Channel One are working together on the project.

On October 17 the crew returned to Earth aboard the Soyuz MS-18.

The film crew stayed in space for 12 days, during which time part of the material for the future picture was filmed.

Its goal is to test the technology of protecting the Earth from a collision with an asteroid.

The launch was carried out using SpaceX's Falcon 9 heavy rocket.

According to NASA, the probe should crash at a distance of 11 million km from Earth into the asteroid Dimorf - a satellite of the larger asteroid Didyma.

The task is to change the trajectory of an asteroid with a diameter of about 160 m. As emphasized in NASA, the asteroid does not pose any danger to the Earth, it was chosen by American scientists as a model.

It is planned to work out the technology of protecting the Earth from dangerous celestial bodies on it.

The change in the trajectory of the space object will be monitored from the Earth using a telescope.

On November 24, the Soyuz-2.1b launch vehicle launched from the Baikonur cosmodrome, which launched the Progress M-UM transport cargo vehicle into orbit with the latest Pryhal node module.

The module docking with the Russian sector of the ISS took place on November 26.

The Prichal is the last module that Russia added to its segment of the International Space Station before its completion in 2024.

The module should expand the operational and technical capabilities of the Russian segment of the ISS.

It is a spherical sealed compartment equipped with a variety of electronics.

On the surface of the "Prichal" there are pipelines and valve blocks for refueling transit lines.

December 8 at 10:38 Moscow time from the Baikonur cosmodrome started

On board were space tourists from Japan - billionaire Yusaku Maezawa and his assistant Yozo Hirano.

The flight was commanded by cosmonaut Alexander Misurkin.

The tourists stayed in orbit for 11 days, during which time 9 experiments were carried out as part of the Russian scientific program.

The guests of the station also took part in scientific work.

In particular, they took part in the LAZMA medical experiment aimed at studying blood microcirculation in microgravity conditions.

The space tourists returned to Earth on December 20, all the descent operations took place as usual.

The amount the billionaire paid for the space excursion has not been disclosed.

Messenger to the star

On December 14, the Parker Solar Probe interplanetary probe passed through the Sun's corona for the first time.

The probe was the first man-made object to come this close to a star.

During its passage through the upper part of the solar atmosphere, Parker Solar Probe measured the magnetic field of the corona and the properties of solar particles, NASA said.

The Parker Solar Probe mission was launched in August 2018.

The goal is the maximum approach to the Sun, we are talking about an approximation of about 6 million km.

Having completed its mission, the probe will have to disappear into the hot atmosphere of the Sun.

It is assumed that this will happen by about 2025.

Until this moment, the device must cross the solar corona 24 times, each time gradually approaching the star.

The probe is protected from combustion by a heat shield made of a special carbon fiber material.

On December 25, the Ariane 5 rocket with the James Webb orbiting telescope launched from the Kourou spaceport in French Guiana.

Soon the telescope was launched into orbit.

Over the next four weeks, the device will move to its destination at a distance of 1.5 million km from Earth.

The telescope is named after the head of the Apollo program, James Webb.

The device is to replace the Hubble Orbital Observatory.

Using the James Webb telescope, scientists will study the oldest galaxies and stars that emerged in the universe after the Big Bang, as well as look for exoplanets.

The observatory has the largest mirror ever launched into space with a diameter of 6.5 m.