Gold protection: scientists have invented a way to reduce the side effects of radiation therapy

Russian scientists have created a new system for the delivery of radionuclides to a cancerous tumor. They managed to reduce the side effects of the radioactive isotope thanks to a film of gold or a titanium-containing organic compound. Tests in mice have shown that the new method blocks non-therapeutic radiation by 98%. This will significantly reduce the side effects of radiation therapy. 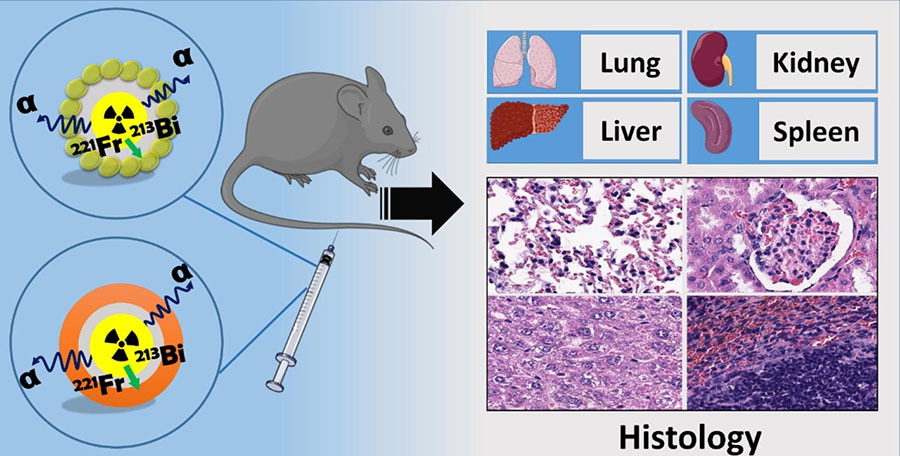 The project received a grant from the Russian Science Foundation.

The results are published in the Journal of Colloid and Interface Science.

The new technique is able to reduce the side dose of radiation by up to 2%.

The existing methods make it possible to achieve a decrease in this radiation only up to 16% of the total volume of radioactive isotopes introduced into the patient's body.

The researchers chose the radionuclide actinium-225 (225Ac) as a therapeutic substance.

As the scientists explained, firstly, when it decays, enough energy is formed to effectively affect cancer cells.

Secondly, the isotope has a half-life sufficient for transportation to medical institutions - its activity is halved in ten days.

This radionuclide is used in nuclear medicine, and the Russian state corporation Rosatom even exports actinium-225 abroad.

To deliver a radioactive isotope to a tumor, Russian scientists have developed and synthesized silicon dioxide nanoparticles.

Then, radionuclides were chemically attached to the nanoparticles and covered with a film of gold or a titanium-containing organic compound on top.

“These additional layers were supposed to prevent the detachment of actinium-225 and its daughter isotopes from the carrier particles and their chaotic circulation throughout the body, leading to damage to healthy tissues and organs,” the Russian Science Foundation said in a press release.

The researchers tested the effectiveness of the invention on laboratory mice.

One group of animals was injected with a new preparation in the form of a suspension, the second - pure actinium-225 without nanoparticles-carriers or with nanoparticles, but without a coating of gold or titanium.

“It turned out that in all control variants already on the third day the radionuclide accumulated in the liver, spleen and kidneys, leading to the death of the cells of these organs.

On the contrary, nanoparticles with actinium-225, additionally coated with a layer of gold or titanium, practically did not harm healthy tissues even after ten days, ”the authors of the study note.

Scientists were able to establish that the new radionuclide delivery system is capable of retaining more than 98% of isotopes.

As one of the authors of the invention, an employee of the nanopharmacology group of the genetic engineering laboratory of the Russian Scientific Center for Radiology and Surgical Technologies named after Academician A.M. Granov, Timofey Karpov told RT, the development will allow the safe delivery of radionuclides to tumors without harming healthy body tissues.

“In addition to research on laboratory animals, we conducted in vitro experiments -“ in vitro ”- which proved that the particles we synthesized keep actinium-225 and its daughter isotopes from escaping for thirty days,” the scientist explained.

At the next stage of the work, the researchers plan to modify the surface of the nanoparticles using special molecular "labels".

This will give the drug selectivity - once in the body, it will migrate to the cancer cells.

During radionuclide therapy, radioactive isotopes are introduced into the patient's body either in almost pure form, or as part of complex preparations.

The energy of ionizing radiation destroys both the cancer cells themselves and their DNA, due to which they lose their ability to divide.

Due to special molecular "tags", radionuclides act in a targeted manner, accumulating only at the site of the tumor.

However, the method has a serious drawback: while the radionuclide reaches its goal, ionizing radiation has time to harm healthy organs as well.

To neutralize this effect, the developers of drugs for radiation therapy use special carriers that "retain" the radionuclide and its decay products until they are delivered to the tumor.

Usually, short protein molecules, artificial membrane bubbles, and nanoparticles from inorganic compounds are used for this.