Rita Sánchez, the ambassador of Mexican cuisine who brought the chili peppers in her suitcase, returns to the Madrid kitchen

For many, the taste of childhood is chocolate bread. For others, like Rita Sánchez, they are the remains that were left on the tejolote and that their mother spread on an omelette, ... 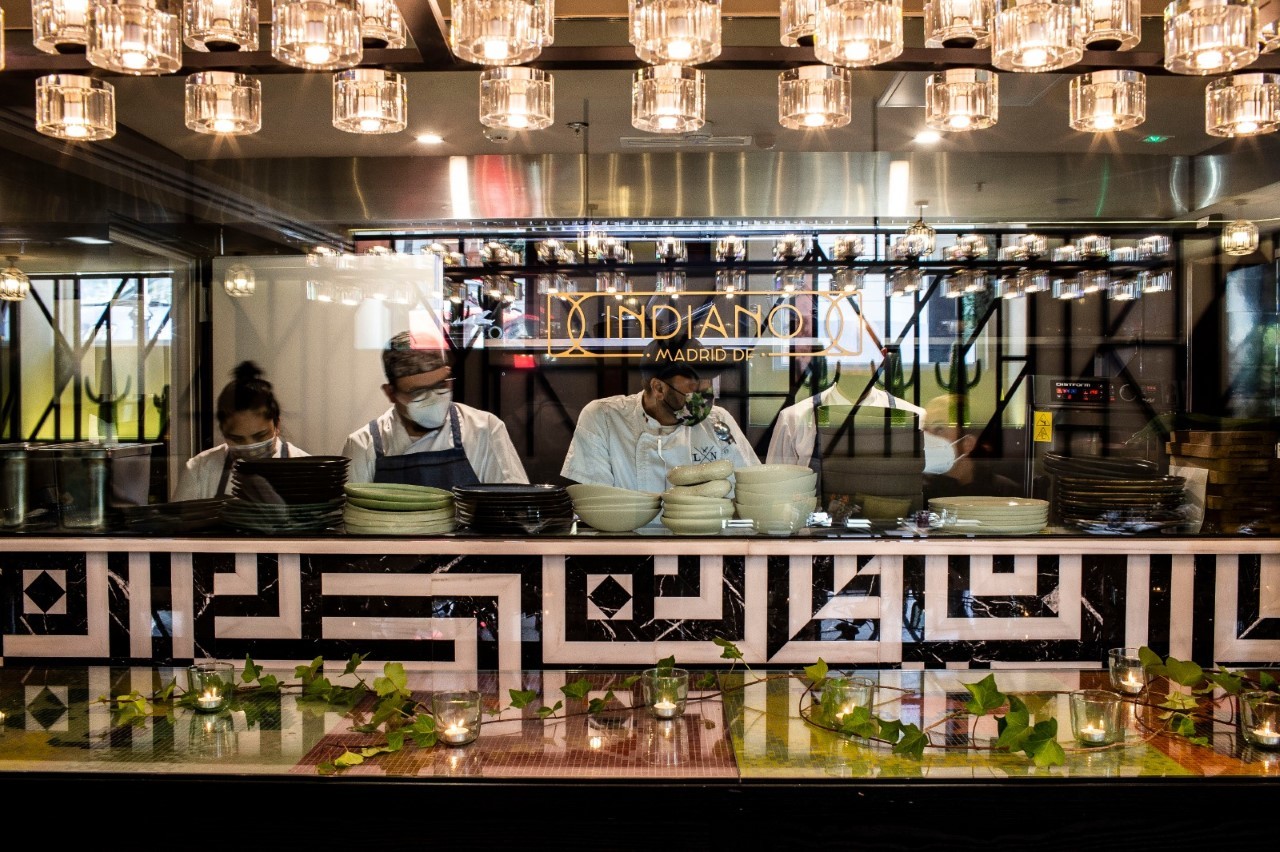 For many, the flavor of childhood is chocolate bread.

, they are the remains that were left on the

and that her mother spread on a tortilla, after mashing the ingredients and preparing a rich sauce in the molcajete.

Not only the childhood of Rita Sánchez (Guadalajara, Jalisco, 1961) is linked to the

that guards - and offers - the essences of Aztec culinary traditions.

His whole life is.

At first, as a recipient and enjoys the knowledge of her

later as their transmitter.

Because this Mexican opened in Madrid, in 1998, La Taquería del Alamillo, a place that was a benchmark of the traditional cuisine of her country, and that her thing was not the kitchen, but communication.

She set it up, turned it into a temple and sold it in 2011. And, although in these 10 years that have passed

she has not separated herself

from gastronomy (quite the opposite), she now returns to the Madrid hospitality as gastronomic director of the Indiano Madrid Restaurant Mexico.

The cooks at work.

The space, located in the

, previously had another life - and other hands - marked by fusion (Spanish raw material with culinary techniques from the North American country). Today he is "a Mexican with nods to Spain, but a traditional Mexican," explains the cook, escorted by

, husband and partner also in all his professional adventures.

Speaking in silver: Rita brings back to Madrid - she already did it more than 20 years ago - the

, although this time she has had help. "To design the menu we have invited

, in ceviches, because we wanted to include the freshest flavors. We have opted for a

menu of sea and land

, with all the diversity that characterizes our gastronomy", Rita points out.

And it is that the tapatia proposes in Indiano

through the different states of the country, a tribute to its kitchens and its cooks.

From the Mayan moon ceviche, originally from Yucatán, or the

or the duck carnitas flutes, in scraped tortillas from Jalisco.

Despite the incorporation of seafood and dishes and

presentations of the XXI century

, Rita does not play the distraction. "Each dish is essentially tradition. In them we apply the teachings that Luis and I have learned - throughout our lives - from

in small towns, in communities or in ranches." From recipes that are passed from mothers to daughters and techniques that are practically "no longer used in cities to little-known uses of some ingredients," she clarifies.

, Rita has something of a Phileas Fogg and an anthropologist.

"I usually travel to Mexico about three times a year and spend time there. When they

me to take over Indiano, I left

to soak up everything

, new and old, but above all

He continues: "I dedicated myself to trying, trying and trying to return to Spain with everything fresher, with something different and

with my own stamp

. The idea is that when you come to Indiano, you will find flavors that are not in other restaurants. You may like them more or less, but they are

And in those they are,

, very thought out and

"Right now we are going, as who says, crawling. The principles are always like this. We have to consolidate it. At the moment,

we do not have suggestions

of the day, although we plan to introduce some vegan proposals and also

related to key dates for us, such as

which is usually offered at the

altars of the dead,

-Have you thought about including iconic recipes from La Taquería del Alamillo, such as the marinated meat molcajete, the huitlacoche or the pozole, that hot corn soup that you had to serve even in summer?

It is happening to me that many people ask me for dishes from then ... I explain to them that this menu is very

different from that of those times.

There are times when I say to myself that maybe sometime I will treat them to their whims, since they do me the favor of coming to the restaurant, but I don't know ... [For now they are just conversations with herself.]

And it is that Rita finds it difficult not to pamper herself with the kitchen. "I come from a family and a culture in which everything is

given to you through food

or cents, which is how they were written in those days. " And there, although it took him a long time to find out, he began his profession.

Before Rita, cook and

, there were other Ritas. The Rita who enjoyed the aromas that came out of the

where her mother roasted the tomatoes and the chili - "that smell of burning so delicious ..." -, of the molcajete when

, of the freshly made tortillas or of the mole . The Rita who worked in interior design and the one who at the age of 20 had a

. The Rita who worked in the communication area -career in which she graduated- of the

of the Autonomous University of Guadalajara and filled the Degollado Theater with people of all conditions to listen to a classical concert ... La Rita who

(1993) to form a family with Efrén from Toledo and dedicate himself to communication and he came across, without looking for it, with the hotel business.

After a tough start, he found work at La Taquería de Birra.

"The best school I had. I learned everything there and went through all areas, until in 1998 we decided to open our own house,

Determined that it was a little corner of Mexico in Madrid, she wanted the kitchen to be

It offered dishes impossible to find in Spain.

the pig trotters, the

The menu was growing with recipes hardly known here and with others that the most traveling diners or the Mexicans themselves asked for.

"I don't have it, but I'll do it for you, I answered. In the end, the plate was consolidated and

I couldn't remove it,

The problem was finding the ingredients. "The suppliers told me that I was crazy, that they were not going to bring them just for me. So Efrén and I set up a marketer and

corn, dried chili, soft drinks and barrels ...". When they traveled to Mexico they returned with

. "Serranos, habaneros ... At customs they had to wonder why this crazy woman wanted those things," he says with a laugh.

, Mawey worms, zanzarrías ...) and "a little store, La Canasta Mexicana, which had 450 products."

"It is not that we came to discover America to the Spaniards, we just wanted to bet on something and open the way for ingredients to arrive that are essential for

and find its seasoning."

After the sale of the restaurant (2011) in full success - it was attended by popular characters from all walks of life;

and even had a person dedicated exclusively to

and the closing of the store (2013), Rita turned to another passion: gastronomic research and her website cocinandoconrita.

"We had created a page on the Internet and we spent long periods traveling through the States of the Republic, visiting communities, chefs, restaurants, traditional cooks, markets ... We

that, sometimes, my family or friends did not even know. ", adds the anthropologist Rita.

And when he returned to Madrid, he did not lose contact with the flavors and people of Mexico.

with institutions, for example, with Casa de México."

Rita always linked to gastronomy and always backed by a discreet Efrén.

"As I am the Mexican, I am the visible face, but he is involved

in all the garlic

, participates in everything ... He has been a mixologist and, in addition, he makes

-Since you have mastered the subject like few others, how much do you know Spanish about Mexican cuisine?

-It has nothing to do with the times when I came here.

I think that Spanish today identifies flavors, knows if they are giving it quality, although there are still

many dishes to discover:

zarandeados, mole blanco, some preparations for meats, ingredients that have gone unnoticed ...

And here she and her inseparable Efrén are to continue bringing the most authentic Mexico.