The 10 most beautiful towns in the Basque Country

The Basque Country offers a wide range of destinations that allow you to enjoy both the sea and the interior nature, whether as a couple, as a family or alone. Culture,... 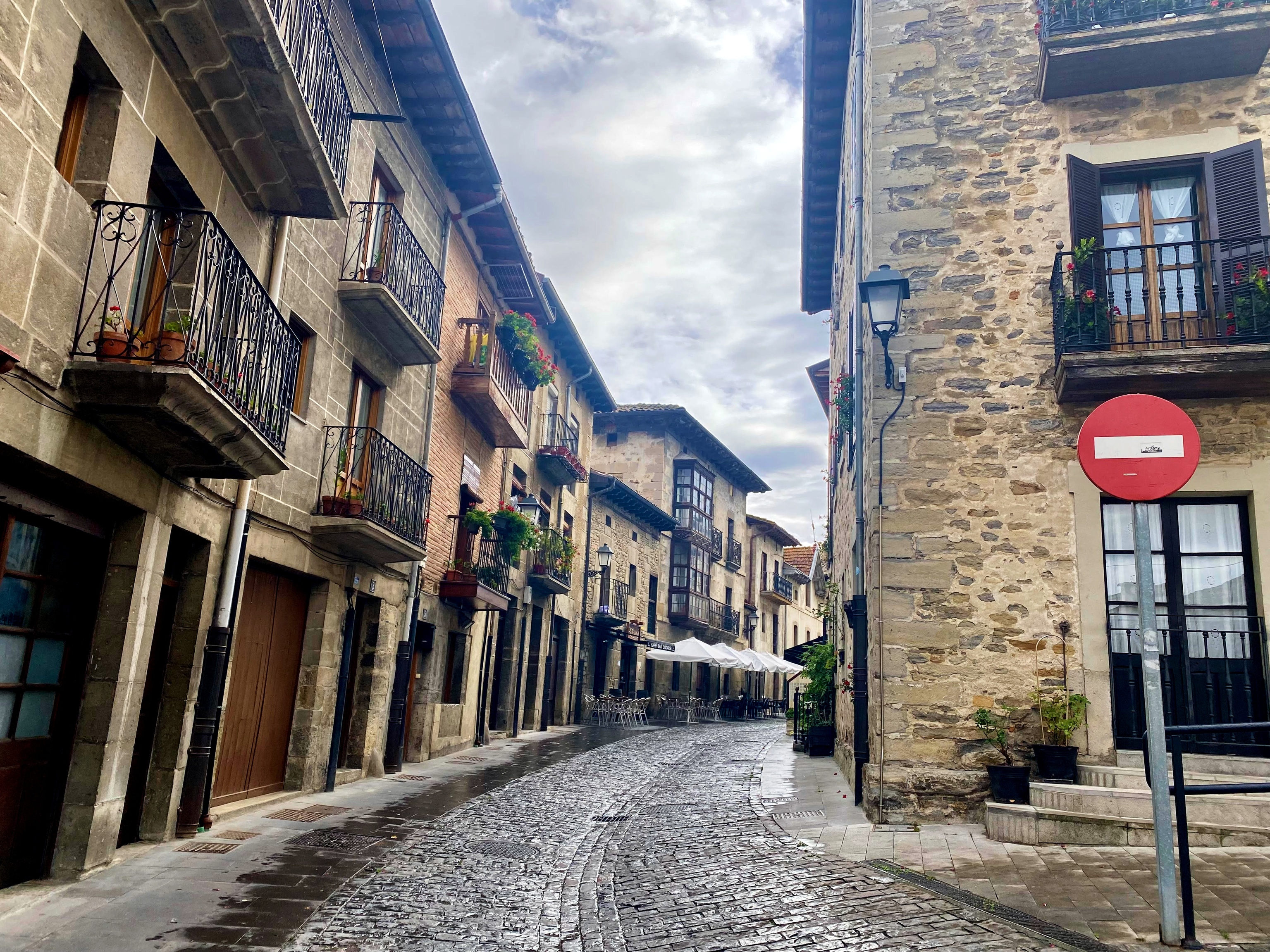 The Basque Country offers a wide range of destinations that allow you to enjoy both the sea and the interior nature, whether as a couple, as a family or alone.

in hundreds of villages, of which we selected ten.

The town of Artziniega has 1,800 inhabitants.

Although it has different Roman sites, the written history of Artziniega begins in 1272, when King

gave it the title of town. Its mercantile relevance in the Middle Ages brought with it the settlement of noble lineages that left their mark on

distributed in the different villas, residential towers and public buildings of its three main streets (and parallel): the one of Arriba, the one of the Middle and the one of Abajo. Today it pampers its past like few others, thanks to its neighbors, 1,800 inhabitants dedicated to the conservation of the town, a tradition that dates back to the 19th century, when the locals put into practice works typical of a larger population. A good example of the popular impulse are the paintings on the portico of the Iglesia Nuestra Señora de la Asunción, made by local painters who left their mark with different anachronisms (

, a true journey back in time in which the way of life of the inhabitants of the region in bygone times is recreated, as well as its scenic surroundings, possessing a character and beauty that have made it the setting for films such as

Getaria is the birthplace of Juan Sebastián Elcano and Cristóbal Balenciaga.

, the first man to go around the world. But he is not the only global celebrity neighbor.

was also born there

, one of the most important creators of haute couture, as can be seen in the museum that bears his name, where his

relevance in the history of fashion and design is revealed

. For hundreds of years

had a great importance in the economy of the town and the presence of cetaceans remains today in its shields. A common holiday destination for many Basques, its medieval walled town sits on a hillside in which it stands out

the silhouette of Mount San Antón

Its grilled fish and wine are a great gastronomic attraction, while its spectacular slopes and

(a geological phenomenon composed of rhythmic alternation of layers of hard cohesive rocks interspersed with softer friable ones) give it a unique landscape.

. And within it, Elciego, with the Hotel de Bodegas Marqués de Riscal designed by

as a solemn witness, has become a mandatory stop. There are several hypotheses about the origin of its place name, but the one that it is related to the lack of vision due to the melopea is completely ruled out. Its wine tradition was forged in the

when the vineyards expanded in such a way that production was multiplied by seven. Winegrowers, small harvester wineries, family wineries with incipient dedication to aging, medium-sized wineries and large producers coexist in the town, which offers a

that complement each other perfectly with its picturesque alleys, full of houses made of emblazoned stones,

, a Baroque building that stands on what was once a Gothic church.

The Mutriku coastline is considered one of the most beautiful stretches of the Basque coast.

The westernmost and most charismatic town on the Gipuzkoan coastline is built on a steep hillside that descends from Mount Arno.

Birthplace of the great sailors

(hero of the naval battle of Trafalgar), was founded at the beginning of the 13th century and its port is one of the oldest in the province.

Its historic center, declared a monumental complex in 1995 (it still preserves its medieval layout and vestiges of its old walls) stands out for its narrow and steep streets, where the visitor will have the possibility of discovering authentic treasures such as the Arrietakua palace, the Zabiel palace, the Montalivet house-palace or the Church of Our Lady of the Assumption, listed as a national monument.

From the Laranga and Galdona neighborhoods you can see beautiful views of the mountains and the sea, while the Astigarribia neighborhood houses an authentic relic: the

, the oldest in Guipúzcoa, built in the 11th century.

Balmaseda stands out for its wide and rich cultural heritage.

The first town of Vizcaya, capital of Las Encartaciones and the gateway to the Basque Country with Castilla y León, has always been

a place of welcome and transit for all

. In the Middle Ages, Balmaseda became a commercial place and one of the main customs points of the Kingdom of Castile. It was

who established in it what was called

, a customs office for the collection of tithes produced by maritime traffic between Castile and the ports of the Cantabrian Sea, Laredo, Castro Urdiales or Bilbao. Today, it enjoys an extensive cultural heritage: two beautiful churches, San Severino, from the 15th century, and San Juan, a Gothic temple located on the left bank of the Kadagua. The peculiar

Convent of Santa Clara and the palaces of Urrutia and Horcasitas

Its landscapes, full of mountains, rivers and forests, offer the possibility of enjoying countless plans in the open air.

Witness of the passage of pilgrims and merchants, its status as a meeting place for different cultures is reflected in the multiple traditions and festivities that the town celebrates.

Zumaia is surrounded by green mountains that descend to the sea.

Located in one of the most beautiful stretches of the Gipuzkoan coastline, in a beautiful bay where

the Urola and Narrondo rivers

. Surrounded by green mountains that descend to the sea in the form of steep cliffs, the coastal town has many attractions: two beautiful beaches, a historic center of interest, a modern marina and a wide range of hotels. The historic center is presided over by the

, an imposing 13th-century Gothic church with the appearance of a fortress, 30 meters long and 14.7 meters wide, raised above the rest of the buildings like a large stone mass.

It draws attention for its solid construction, with hardly any decorative elements on the outside.

Strolling through the narrow and steep streets of the historic center we will find other buildings of interest, such as the Zumaia and Ubillos palaces and the Olazábal and Goikotorre houses.

Itzurun beach is the closest to the historic center of the town.

Open to the sea and

under the protection of the hermitage of San Telmo

, dedicated to the patron saint of sailors, its sands and waters have beneficial health properties due to their high concentration of iodine.

Toulouse was for centuries the great toll of the north SHUTTERSTOCK

Located on the banks of the Oria River, Tolosa was for a decade (from 1844 to 1854) the capital of Guipúzcoa, being a

on the commercial route

that communicated Navarra with the Cantabrian ports. From that glorious past it has inherited

dotted with buildings and monuments of various styles. The urban area is located on a plain formed at the confluence of the Oria, Araxes and Berastegi rivers, and is clearly distinguished in two areas:

the medieval nucleus and the new expansion

. The old town is made up of narrow streets organized in parallel and separated by numerous squares. The

From the seventeenth century, a so-called Basque Gothic temple, with three high-rise naves, ribbed vaults and a baroque façade of great beauty.

The church and convent of Santa Clara, the baroque town hall, the palaces of Idiakez, Atodo, Aramburu and the Diputación, the Provincial Archive, as well as the Euskal Herria square are just some of the examples of the rich heritage of a town that had a

The medieval town of Laguardia is the capital of Rioja Alavesa.LBB

as a watchtower for the defense of the kingdom. It preserves practically intact both its

) that survive in its subsoil. A walk from the Plaza del Ayuntamiento, once a prison and a butcher's shop, to the

Portico of the church of Santa María de los Reyes will

allow you to see numerous

on the ground, a kind of vertical sewers placed to release the wine's emanations and oxygenate the drafts.

The Pórtico is a hidden gem, since its incredible artistic wealth was protected by an entrance wall, which is why it preserves its original polychrome work by

in the seventeenth century.

Five of the gates that allowed to cross the wall to enter and leave the city have also resisted the passage of time: Mercadal, Carnicerías, Páganos, Santa Engracia and San Juan.

Hondarribia is a colorful fishing village rich in both architecture and gastronomy.

Its impressive viewpoints, its beach, its magnificently preserved old town and the Marina neighborhood make up a

hard to beat if you add its large number of bars and restaurants, some considered among the best in the region. This is largely due to the fact that many of the students who are trained with

in the category of

later return to the town and set up their business. Its strategic location, on the border with the neighboring kingdom of France, made it play a

very prominent throughout the centuries.

In fact, Hondarribia (Fuenterrabía in Spanish) got its title of city in the seventeenth century after emerging victorious from numerous battles against its northern neighbors.

At the mouth of the River Lea stands one of the most beautiful enclaves in the Basque Country.

Its regular visitors would not include it in any list ... to have this beautiful fishing village for themselves, with forests, mountains, three beaches, an estuary and the paradisiacal presence of

the island of San Nicolás

, which can be reached on foot. at low tide.

Its fishing past, dedicated in the Middle Ages to whaling,

with a rich artistic heritage crowned by the

Basilica of the Assumption of Santa María

with its magnificent gothic altarpiece bathed in gold, considered the third largest in Spain.

There are many points of interest that the municipality offers tourists, since there is a wide representation of architectural buildings among which the palaces of Uriarte, Uribarri, Oxangoiti and Abaroa stand out.