In today's Gyeonggi-do audit by the National Assembly Land, Infrastructure and Transport Committee, there was a fierce debate between opposition lawmakers and Governor Lee Jae-myung over whether or not Governor Lee Jae-myung was breached in relation to the fact that the business agreement did not include a provision for recovering excess profits from private businesses in Daejang-dong. 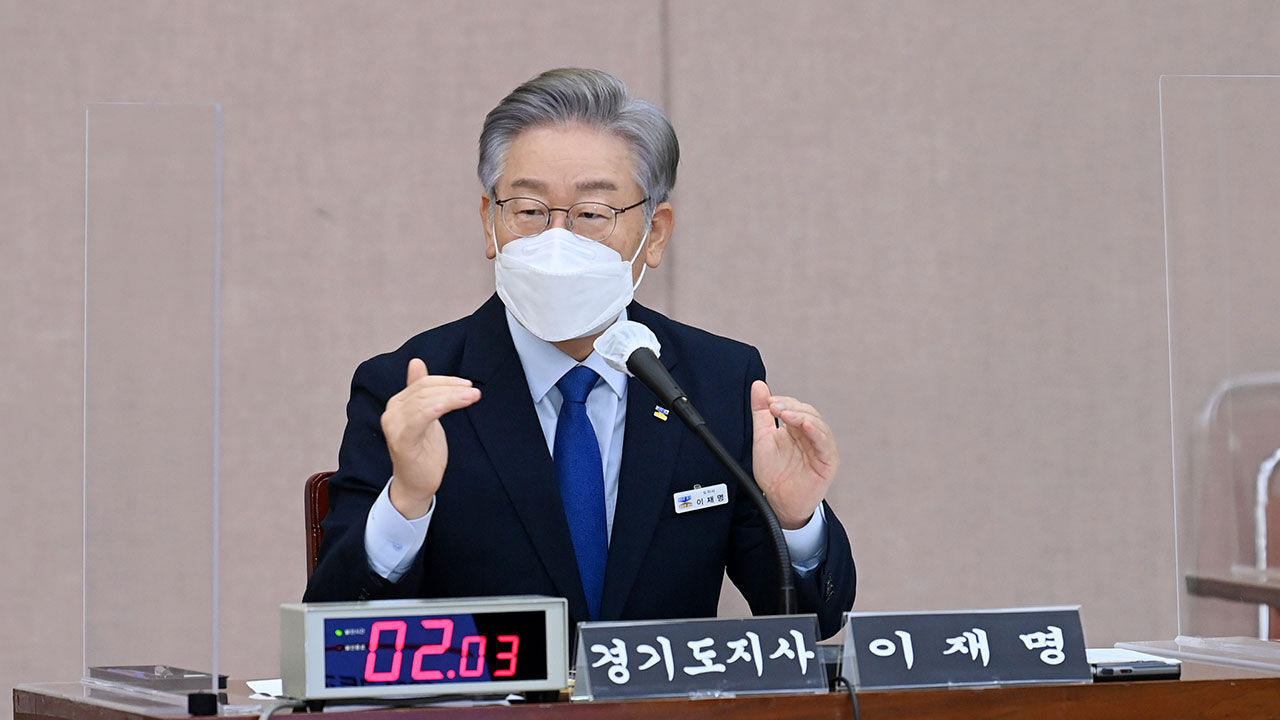 In today (20th) Gyeonggi State Audit of the National Assembly Land Transport Committee, there was a fierce debate between opposition lawmakers and Governor Lee Jae-myung over whether or not Governor Lee Jae-myung was breached in relation to the fact that the business agreement did not include a provision for recovering excess profits from private businesses in Daejang-dong. Went.

In addition, a battle arose over the appointment of Yoo Dong-gyu, the former head of the planning division of Seongnam Urban Development Corporation, and the nature of the task force that he formed separately from Seongnam City with the development of Daejang-dong in mind.

Along with the claim that 'they were obsessed with small fixed profits and failed to prevent the profiteering of private companies,' there were also arguments about 'the designer of the Daejang-dong development is a sinner' and 'the designer is a good person'.

Opposition lawmakers launched an onslaught over the omission of the excess profit recovery clause, which became a pretext for the extortion of private businesses, and the responsibility of Governor Lee.

Rep. Kim Eun-hye, from the People's Power, said, "I said that I did not accept the return of excess profits, but who suggested it?" He urged, "Is it Yoo Dong-gyu, Jeong Jin-sang (former Gyeonggi-do Policy Director), or another public official?"

The governor said, "After the application contest, front-line employees did it during the negotiation process, but it is a fact that the executives did not adopt it at the time."

Rep. Kim said, "If you don't know about private development profits, you're incompetent. Would you be a good candidate for president?" He said, "By blocking the return of excess profits, Hwacheon Daeyu drove close to 1 trillion won. That's a breach of trust."

In response, Governor Lee said, "It was the policy of receiving a fixed profit, and we had to follow the city corporation, but if we ask for a share if house prices rise more than expected, then of course the other party asks us to lower our fixed profits when house prices fall. It is against the law….” He rebutted, “How can it be a breach of trust to suddenly not receive a working opinion while negotiating?”

Moon Jin-seok, a member of the Democratic Party, said, "I asked the financial sector if there was a problem with the provision of an excess profit recovery clause when there was an agreement, and they said they were in breach of trust." If you add it, if you accept it, the bank becomes a breach of trust."

In the internal report of Seongnam Urban Development Corporation prepared at 10:34 am on May 27, 2015, at the initial stage of the Daejang-dong development project, a separate provision (distribution of profits) seems to be necessary if the sale price exceeds the sale price suggested by the private business operator. " was included, but at 5:50 PM, 7 hours later, this content was removed.

In response, Governor Lee responded to the National Assembly's Administrative Safety Committee on the 18th, saying, "We did not accept the suggestion of a front-line employee to add, rather than delete, the excess profit recovery clause."

As the reason for the non-adoption, he explained, "During detailed negotiations with the Hana Bank Consortium, which was selected from among the three applicants, there was a working-level opinion that 'to recover the excess of the expected profit when the real estate market improves', but the corporation was not accepted in the approval process." .

Lee Jong-bae, a member of the People's Strength, said, "He became an executive at the Facilities Management Corporation despite only having two months of experience as a driver of a construction company and the head of a remodeling committee. I was the chairman of the promotion committee,” he asked.

He also asked, "After the appointment of the head of the industrial complex, former general manager Yoo formed a technical support TF that had nothing to do with his work and drew up a new town development plan for Daejang-dong and Wirye. Did you not give official instructions?"

To this, Governor Lee replied, "I do not remember the process of appointing former general manager Yoo. It seems that it was the authority of the Executive Recommendation Committee, so ask him."

He continued, "I knew from the media reports that Director Yoo formed the task force. At that time, Director Yoo could personally review the recovery plan through Seongnam Urban Development Corporation." "In Seongnam City, the Urban Development Project Team did it.If Yoo Dong-gyu had that kind of capability, I would have made him the president, but he didn't make him the president until the end."

Justice Party lawmaker Shim Sang-jeong pointed out, "I was able to pursue the public interest by applying the upper price limit for rental apartments, 25% of rental apartments, and provisions for recovering excess profits, but I gave up on everything."

Rep. Shim also said, "A total of 1 trillion won in loss was mobilized for private preferential treatment." "I asked a citizen to say, 'The person who received the money is the criminal, but the person who designed it is a sinner.' He demanded an apology to the residents who applied the ripped off price.

He said, "There is no case of public-private joint development by local administrative agencies in Korea in units of 100 billion won. Over 20 years, only 170 billion won has been recovered through national urban development projects." He strongly refuted the allegation of being obsessive.