"Deliver substance to the Earth from the surface of the planet": Russian scientist - on the tasks of the space mission "Venera-D"

The launch of the Russian spacecraft Venera-D is tentatively scheduled for 2029. Academician of the Russian Academy of Sciences, scientific director of the Space Research Institute of the Russian Academy of Sciences Lev Zelyoniy said this in an interview with RT. He noted that recently Venus has attracted the attention of the international space community, so a whole fleet of vehicles will be sent to the planet. Zeleny spoke about the main tasks of the Venera-D mission, among which is the detection of extraterrestrial life. He also added that the dispatch of the interplanetary station in 2029 is the first part of the domestic program of flights to Venus. 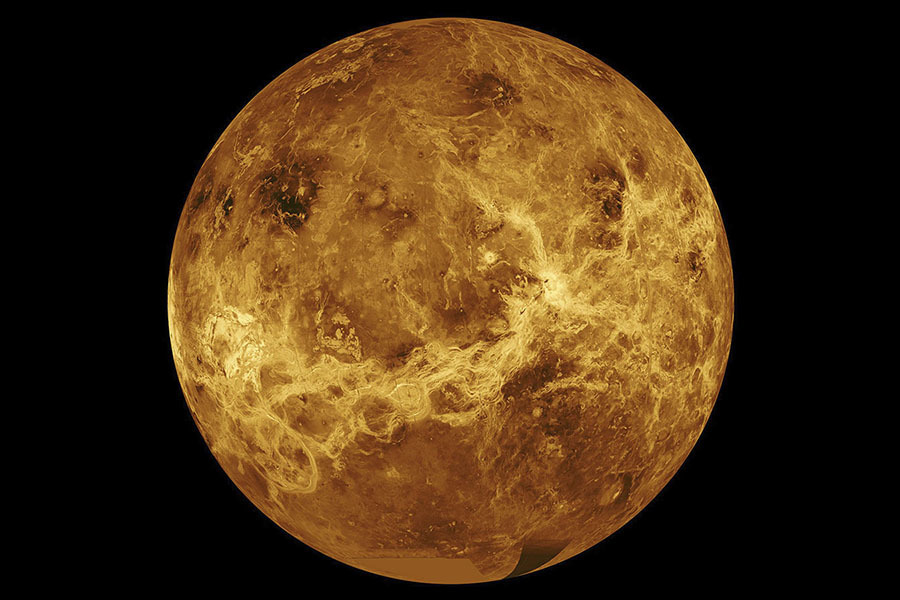 - At the 12th International Symposium on Research of the Solar System, the approximate launch date of the Russian mission "Venus-D" was announced.

The launch of the device is tentatively scheduled for November 11, 2029.

When did the development of the Venera-D spacecraft begin?

- The development of the Venera-D spacecraft began long ago, in the early 2000s.

The projects, unfortunately, take a long time to develop.

For example, the discussion on the development of the Spektr-Roentgen-Gamma orbital observatory, which is now functioning and producing good results, began in the Soviet Union.

We have been talking about Venus for a long time.

It is historically considered a "Russian" planet, since in the 1970s Soviet spacecraft successfully landed on it eight times.

Since then, the planet has become very popular.

In the current decade, a whole fleet is sent to Venus: an Indian spacecraft, two American vehicles, one European and ours.

Therefore, Venus will actually be in the center of attention of scientists, engineers and everyone who is interested in space.

- What exactly will the device study on the planet?

- You have to understand that many countries are participating in the project.

There is a lot of time until 2029, and we will make the appropriate adjustments.

It turned out that our tasks, which we set for ourselves, do not directly compete, but complement those that are set before the rest: in the European, Indian and American missions.

In this case, a good platform for collaboration emerges.

It is similar to the Earth, but it cannot be called the sister of our planet.

The temperature on the surface of Venus reaches 500 ° C and the pressure is almost 100 times that of the Earth.

The oceans that were on Venus have evaporated due to the "accelerated" greenhouse effect.

Now the planet is "wrapped" in a dense blanket of clouds, and through them it is very difficult to see something from orbit.

In the 1970s and early 1990s, Venus was explored by domestic and American spacecraft. Thanks to them, we were able to see, for example, that there are high mountains on Venus. On our new expedition, we plan to continue exploring the surface of Venus.

The first task of the mission is to explore the planet on a new level. To give the device the opportunity to function longer, in comparison with the Soviet ones, which worked on the surface for only one and a half to two hours. We will be able to extend this time. It is also important that much more highly informative devices and good optics will be installed on our device. The second task is cloud research. The surge of intense interest in Venus over the past two or three years is associated with the discovery of such a substance as phosphine in the planet's clouds. This is a compound of phosphorus and hydrogen, which may indicate the vital activity of some type of bacteria. In the clouds of Venus, the pressure and temperatures can be similar to those on Earth, and therefore it is not entirely crazy idea to assume the existence of microbial life there. Measurements will also be carried out at large distances from Venus,and they will be associated with the solar wind (a stream of charged particles emanating from the upper, hottest layer of the Sun. -

We will study how the atmosphere of Venus interacts with these streams.

But there are even bolder ideas.

For example, Leonid Vasilyevich Ksanfomality (professor and famous planetary scientist) examined photographs from Soviet vehicles that were on Venus.

On them, he saw that some objects that look like stones are displaced and change their shape.

All this might seem like some kind of artifacts, but later the professor applied the most modern processing methods to these images.

This effect remained and was present in all panoramas.

It is very difficult to imagine life in such conditions of the atmosphere, but we understand that more exotic forms of life are possible than the earthly ones we are used to.

The answer to the question of whether there is life on Venus can only be given experimentally, so we will carefully monitor the data that the devices will send us.

- Will the Venera-D mission be the only one, or is it part of the flight complex?

What other domestic devices will be developed to study Venus and when will they be launched?

- It is worth expressing gratitude to the head of Roscosmos Dmitry Olegovich Rogozin. He became interested in this project and invited us and our colleagues to work out not one expedition, but a whole program. The first program will include a detailed analysis of the material on the surface of Venus. The second is the study of the rotation of the planet's atmosphere. Venus rotates very slowly on its axis, and the atmosphere is fast - this is called super rotation. And the third expedition will be complex and exotic - it is an attempt to deliver material to Earth from the surface of Venus, from some pre-selected region of the planet, which we will explore with the help of the first two expeditions. It sounds fantastic so far, and it may be too early to talk about it. The tasks of the projects can be adjusted according to the results of "Venera-D" and previous foreign expeditions.We have developed the first program in detail, prescribed the second in general form, and now we are thinking about the third.

- The last spacecraft went to Venus in 1984 and was developed back in the Soviet Union.

What caused such a long pause and what has changed now?

- They continued to be interested in Venus all the time, but even in the richest space agencies there may not be enough resources or people.

Nevertheless, near Venus in the "zero" years and at the beginning of 2010 the apparatus of the European Space Agency "Venera-Express" worked.

There were several Russian instruments.

He gave very interesting results, but there were no revolutionary discoveries.

We were planning to fly to Venus all the time, we wanted to continue Soviet research.

However, the financial situation did not allow us.

The time of Venus has come only now.

It is a pity that we, who have been actively involved in this planet, may find ourselves in the second line of spacecraft that will study the planet.

Now we have projects related to the Moon, Mars, experiments in astrophysics, so we can say that Venus has faded into the background.

However, by the end of the decade, the Venera-D project will be ready.

- The Japanese apparatus "Akatsuki", which was launched to Venus in 2015, continues to operate in the orbit of the planet.

However, the electronics of this device were exposed to cosmic radiation, due to which some of its cameras ceased to function.

How to protect orbiting instruments from cosmic radiation?

- There is a popular expression: "there is no reception against scrap."

Strong fluxes of radiation, if they suddenly turn out to be in excess of those for which the device's protection is designed, can disable the equipment.

Theoretically, you can put even more protection, but then the device will become very heavy and will look like a radiation shield.

It is not uncommon for devices to fail under the influence of radiation.

Venus does not have a magnetic field, just like Mars and the Moon, so everything that is near the planets is exposed to radiation.

Radiation rays usually come from the sun or from flaring stars.

There is always such a dilemma: to make the defense stronger, losing the possibility of some experiments, or to risk doing more research, but with the threat that they may be quickly interrupted at some point.

- Is it realistic at the current level of development of space technology to return the device from the orbit of Venus to Earth?

- It is possible to return the device to Earth from the orbit of Venus, but for the first mission it makes no sense.

If we talk about the third mission, when the device is on the surface of the planet, then it will be very, very difficult to return it.

Such a task as delivering a sample from another planet to Earth has been solved by mankind only for the Moon.

It is still impossible to deliver soil from Mars.

However, the Americans are planning to do this.

This is how space works.

To be successful in any research requires a large amount of strength, even with the rocketry that we have now.