At 83, the actress Jane Fonda continues to show herself as an inexhaustible activist in favor of physical exercise and the preservation of the environment. In recent dates ... 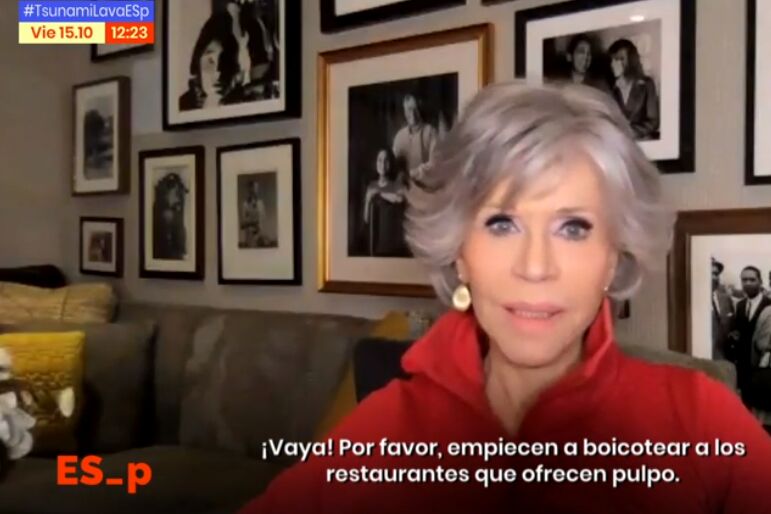 continues to show herself as an inexhaustible activist in favor of physical exercise and the preservation of the environment.

Lately she has written the book "What can I do? From climatic despair to action" and for this reason the journalist Nando Escribano has interviewed her for

The talk was broadcast this Friday and has left some surprising phrases.

Because one of the simple actions to defend the environment that Fonda proposes is to ask in restaurants where the dishes they offer on the menu come from and how the animals used in them have been captured.

When Nando Escribano mentions that point to her, the actress and activist says that she recently went to a restaurant and saw that octopus was offered on the menu.

According to his account, he entered the kitchen and asked the chef if he knew that octopuses "have emotions, they are sensitive and tremendously intelligent creatures."

Fonda invites you to reject these dishes on the grounds that "great wild creatures" are served in them.

And when the interviewer tells him that octopus is an important part of the gastronomy of northern Spain, Fonda replies with a request

In the fragments of the interview shown in Susanna Griso's program, Fonda assures that she is well because she eats "healthy food", exercises and remains "curious".

From the United States, the actress and aerobics prophet

"The images are both beautiful and terrifying. I feel bad for the people who lived there," he says, and links that vision with his desire for progress to be made at the Climate Summit to be held from November 1 to 12. 2021 in Glasgow.

Not only does she call for mobilization, she is also proud to have been arrested five times for civil disobedience.

He presented his new film The beautiful message of Dani Rovira in El Hormiguero after overcoming cancer: "Turning years, months and days is fortunate"