The execution of the arrest warrant for Yang Kyung-soo failed... Withdraw after 1 hour

The police tried to execute an arrest warrant for Yang Kyung-soo, the head of the Korean Federation of Trade Unions today, but it was ultimately unsuccessful. Chairman Yang appeared at a press conference five days after the arrest warrant was issued. 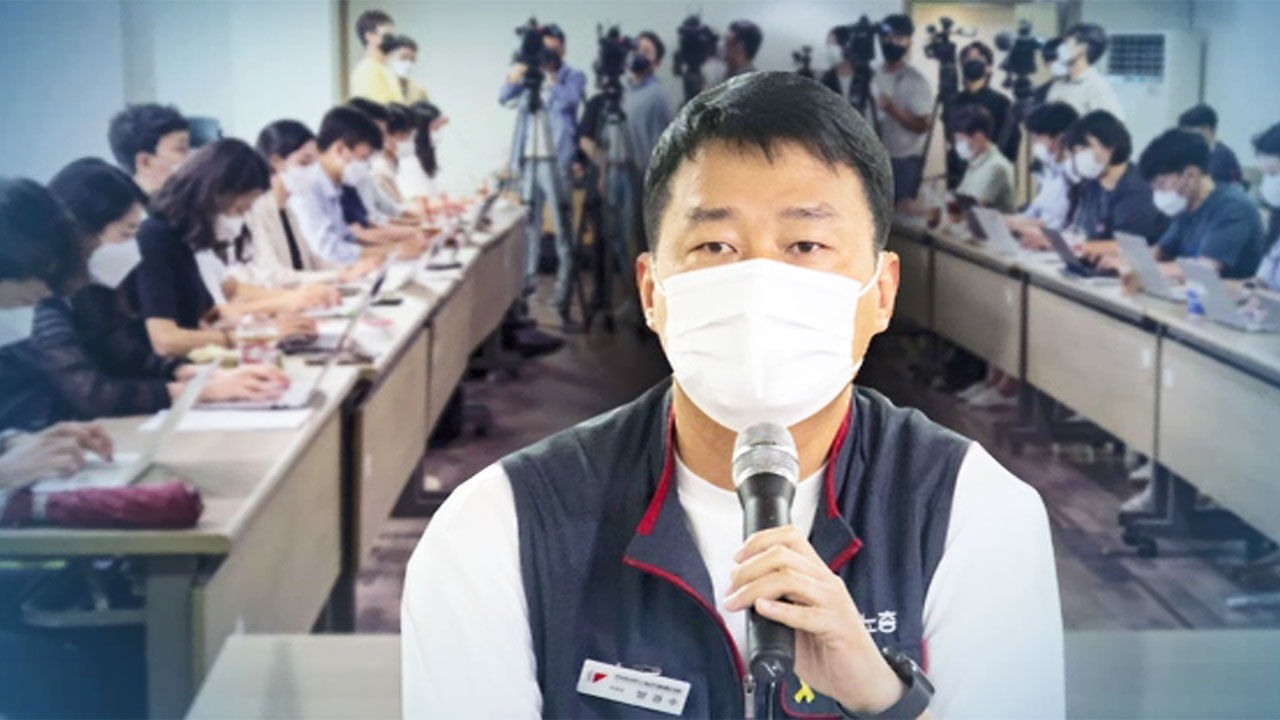 police tried to execute an arrest warrant for Yang Kyung-soo, chairman of the KCTU today (18th), but in the end, it failed. Chairman Yang appeared at a press conference five days after the arrest warrant was issued. He emphasized that solving the labor problem is more important than criminal punishment for himself.

Yang Kyung-soo, chairman of the Confederation of Trade Unions, was issued an arrest warrant on charges of leading an illegal assembly that violated quarantine rules between May and July, including the national workers' convention with an estimated 8,000 people gathered on the 3rd of last month.

[Han Sang-jin/KCTU Spokesperson: 'Where is Chairman (Kyung-soo Yang)?' That is something we cannot confirm.] In the

meantime, Chairman Yang's whereabouts were obscure, but he appeared on his own five days after the warrant was issued.

He held a press conference at the KCTU office and emphasized that it is a time that requires more attention to the realities of labor, such as the issue of non-regular workers and industrial accidents, rather than criminal punishment for himself.

[Yang Kyung-soo/Chairman of the Korean Federation of Trade Unions: The voice of the field is 'It is more frightening to lose a job than to get COVID-19. I'm more afraid of dying from an industrial accident.' If the government is willing to solve workers' problems, the chairman also has the will to judge personal problems according to laws and systems... .] The

Confederation of Trade Unions repeatedly urged the government for dialogue, but said that there was no sincere countermeasure, explaining that rallies and demonstrations were inevitable.

At the height of the press conference, five days after the issuance of the arrest warrant, the police arrived in front of the building to enforce the warrant.

However, the lawyers for the KCTU blocked the need for a search warrant to enter the building, and the police withdrew in about an hour.

[Cho Gwang-hyeon / Jongno Police Station Investigation Division Head: We will execute an arrest warrant according to the procedure. I am very sorry that you did not cooperate with the execution of the warrant today.] The

Confederation of Trade Unions (KCTU) expressed its will to concentrate on preparing for the general strike in October without cooperating with the execution of the warrant for the time being, but criticized the group's actions while ignoring the enforcement of the law. A voice is coming out.