Twitter laughs at the complaints of a trading expert about an account in a Marbella restaurant: "4,000 euros for eating hamburgers and Dom Perignon"

The Twitter user @kike_moris has uploaded a photograph of an account in a Marbella restaurant complaining about the "372 euros of the service" and of one's anger ... 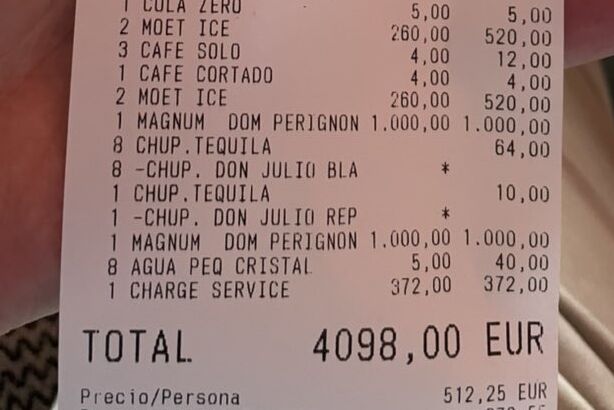 and the anger of one of the waiters, who, according to his version, would have persecuted the group of eight people to claim the tip.

The image has gone viral but the reactions have been very different from those expected by this Sevillian stock exchange expert.

, he says he has dedicated "body and soul to perfecting my investment strategy in the stock market

In this way, "I have helped more than 4,000 students to be profitable in the last year."

Some tweeters have identified the restaurant:

In short, the taunts have not been long in appearing.

Is there a new ice cream?

Some believe that the group of friends has fallen short

The complaint was just an excuse

Enrique Moris is also an entrepreneur.

"I have been creating digital businesses for more than 10 years. If I want you to stay with something, it is that unlike most gurus out there, I show real results of my operations daily on my Instagram," he explains on his website .