Spongebob and Patrick exist, the characters jump off the screens

The popular SpongeBob SquarePants and Patrick have materialized off the screens. The photo of a sea sponge and a starfish in eastern New York has gone viral. 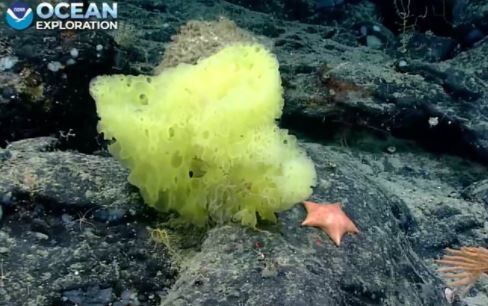 have materialized off the screens.

The photo of a sea sponge and a starfish in eastern New York has gone viral.

And how could it be otherwise, it was a group of scientists who found them "Under the sea ...".

The snapshot was published by Christopher Mah, who works for the National Oceanic and Atmospheric Administration (NOAA) on his Twitter account: "I usually avoid these references, but ... WOW. The real SpongeBob and Patrick!"

"As a biologist who specializes in starfish," Mah explained to

"most of the portrayals of Patrick and SpongeBob are wrong, but I thought it would be fun to make the comparison, because, for once, they are comparable to the iconic images and colors of cartoon characters. "

is a television series created by cartoonist and marine biologist Stephen Hillenburg.

It premiered on Nickelodeon on May 1, 1999. It tells the life of a marine sponge named Bob who among his friends has a marine star named Patrick.

It seems that, on this occasion, the fiction has become real.

The ocean on fire: Pemex reports a spectacular leak with fire in an underwater gas pipeline in southeastern Mexico

Covid-19Coronavirus live: First sanctions and evictions in the return of the curfew to several communities