"The older brother who raped me still lives with me"... Appearance of national petition

In addition to the fact of sexual assault by her older brother since elementary school, the victim's petition to the Blue House, which revealed that she still lives in the same house with the perpetrator, is causing a stir. 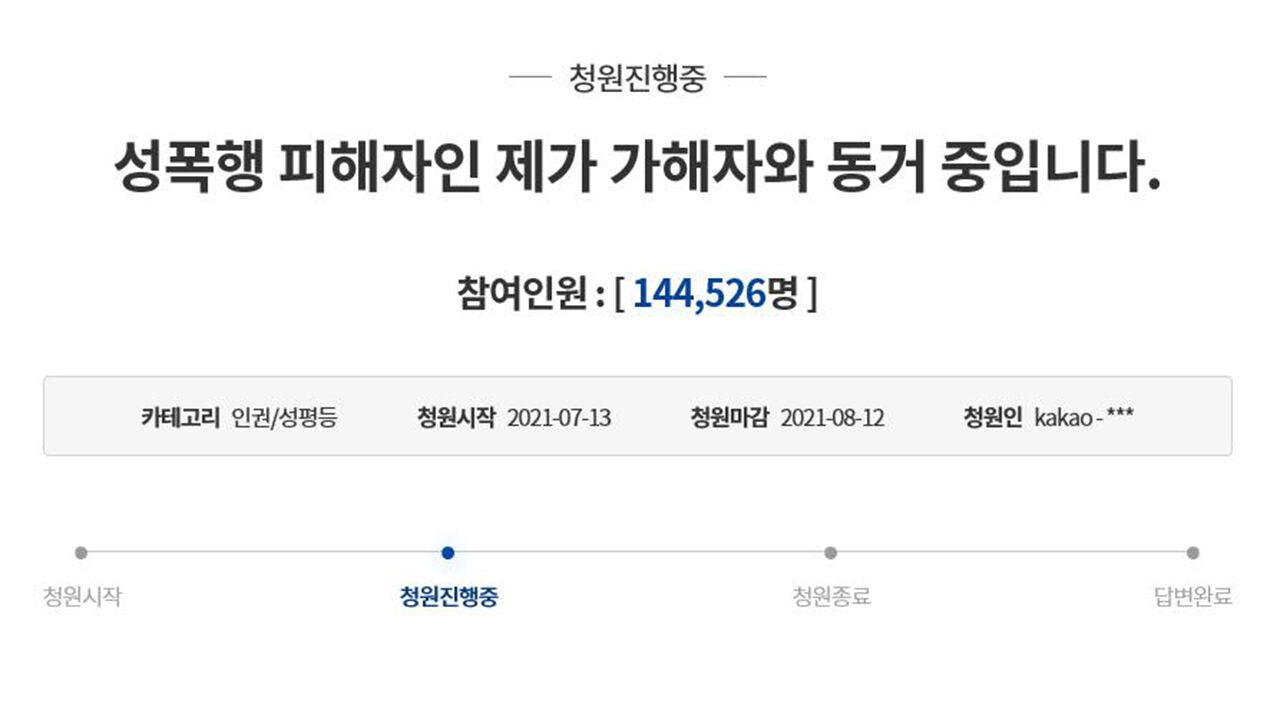 In addition to the fact of sexual assault by her older brother since elementary school, the victim's petition to the Blue House, which revealed that she still lives in the same house with the perpetrator, is causing a stir.

If you look at the bulletin board of the Blue House petition today (15th), the article 'I am a victim of sexual assault, I am living with the perpetrator', as of 7:00 am today, the third day of the petition, got the consent of about 140,000 people.

Victim A (18) said, "I was sexually harassed by my older brother when we were in the upper grades of elementary school when we were remodeling our house. The sexual harassment became more and more daring and became sexual assault."

Mr. A, who grew up with dual-income parents, was emotionally dependent on his older brother, who is one year older than him.

Unbearable, Mr. A reported the damage, and even attempted suicide in February of this year when there was another harassment, but according to his parents' wishes, he is still living in the same house as the assailant.

Person A said, "I am no longer a brother and sister, but a victim and a perpetrator, can I not escape from my parents who demand goodness? I thought about it and made a petition.”

A first reported the damage to the police in June 2019.

The Seoul Metropolitan Police Agency sent his older brother to the prosecution in March last year with an opinion of indictment.Prosecutors indicted my older brother in February this year on charges of violating the Act on Special Cases concerning the Punishment of Sexual Violence Crimes (adultery, such as hierarchies of minors under the age of 13).

The older brother is accused of sexually harassing and sexually assaulting Mr. A since 2016.

This case is currently being tried at the Seoul Western District Court.

While the investigation continued for nearly two years, the victim traveled back and forth between hospitals, friends' houses, and gosiwons, but eventually returned to the house where her older brother was.

Person A said, "(After reporting) I have been living with my family for 1 year and 3 months."

A police official explained, "After the report was made, the victim, who was in the short-term shelter, was advised to enter the long-term shelter, but he went out voluntarily due to schedule problems such as hospital treatment."

A was hospitalized for psychiatric treatment, but he said, "I needed parental consent to be discharged." "My father made me return home as a condition of discharge. That's how I came back home."

Mr. A said in the national petition, "My brother had sexual harassment in February of this year as well, and I was angry, but my parents scolded me rather."

At the time, when Mr. A attempted suicide and injured himself, he wrote, "My father, my primary caregiver, slapped me on the cheek twice."

The police closed the investigation on the sexual harassment case in February this year, reporting that the charges were not substantiated based on the fact that the father of the siblings who were together at the time said that it was not forced molestation.

Mr. A told the media, "(The request for public discourse) started from the beginning hoping that I would be safe." He said, "I thought that I would not be punished if my brother repented and acknowledged it, but I did not reflect at all. I hope I will be punished."