How can accelerating carbon neutral car companies realize "green energy" in the entire industry chain?   Our reporter Zhao Xueyi, trainee reporter Zhang Xiaoyu   In 2020, since my country proposed the "3060" dual-carbon target, the new energy revolution triggered by "carbon neutrality" has accelerated the transformation of the automotive industry to green and sustainable development.   As a n 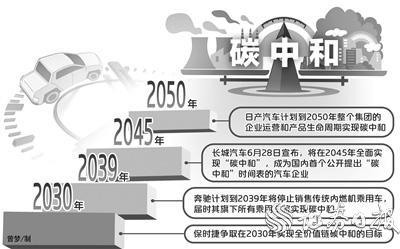 In 2020, since my country proposed the "3060" dual-carbon target, the new energy revolution triggered by "carbon neutrality" has accelerated the transformation of the automotive industry to green and sustainable development.

As a national independent brand in my country, Great Wall Motors announced on June 28 that it will fully achieve "carbon neutrality" in 2045, becoming the first domestic automobile company to publicly propose a "carbon neutral" timetable.

At the same time, Great Wall Motor announced that it will realize the construction of its first zero-carbon plant in 2023 and establish a recycling system for the automobile industry.

Zhang Xiang, a researcher at the Automotive Industry Innovation Research Center of North China University of Technology, told a reporter from the Securities Daily: “At present, carbon neutral assessment begins with the steel and cement industries. The automotive industry has not yet begun the assessment, but the future automotive industry will certainly do so. Be included in the carbon emission assessment, and this time will not be too long."

With the announcement of my country's carbon peak and carbon neutral targets, many domestic auto companies have joined the carbon emission reduction team.

Multinational auto companies such as Volkswagen, Nissan, BMW, Daimler, Porsche, Hyundai, and Tesla, as well as Chinese auto brands such as Geely and Great Wall, have put forward their respective strategic adjustment measures under the goal of carbon peaking and carbon neutrality.

At the same time, multinational car companies have launched a "carbon neutral" timetable.

Among them, Nissan plans to achieve carbon neutrality in the entire group's corporate operations and product life cycles by 2050, and achieve 100% electrification of new models in core markets in the early 2030s.

The Volkswagen Group is committed to achieving carbon neutrality by reducing carbon emissions throughout the product life cycle by 2050.

Mercedes-Benz plans to stop selling traditional internal combustion engine passenger cars by 2039, by then all its passenger cars will be carbon neutral.

Porsche strives to achieve the goal of carbon neutrality across the value chain by 2030.

Among them, in 2023, Great Wall Motors will realize its first zero-carbon plant and establish a recycling system for the automotive industry chain.

Although there is no specific timetable for other auto brands in my country, they have also joined the ranks of carbon reduction.

Among them, BYD announced in February this year that it would launch a study on corporate carbon neutrality planning to explore carbon footprint standards for the new energy vehicle industry.

Geely Automobile has advanced its deployment in innovative business models and cutting-edge technologies such as shared travel, echelon utilization of lithium batteries, charging and swapping infrastructure, and carbon cycle methanol production, and promotes the realization of carbon neutrality in the entire new energy industry chain.

Hu Qimu, chief researcher of the China Steel Economic Research Institute, said in an interview with a reporter from the Securities Daily, “As far as the car itself is concerned, the development of new energy power systems or the application of artificial intelligence systems can reduce the carbon of the car itself. However, the carbon reduction in the production process of car companies and the reduction of car emissions are far from enough. At present, the carbon reduction synergistic mechanism between industries has not been established. This may also be a challenge for carbon reduction in the industrial chain. We need to take a more macro view as soon as possible. Institutional design is carried out at the level of the industry to form effective rigid constraints on the overall carbon reduction of the industrial ecology.

How to realize the "green energy" of the whole industry chain?

Yang Dayong, general manager of Changan New Energy, once said that taking a fuel-powered SUV as an example, according to carbon calculations, the proportion of auto parts manufacturing is 14%, the vehicle manufacturing link is 1%, and the fuel production link is 9%. Carbon emissions from cycle fuel use reached 76%, which accounted for the bulk.

For auto companies, how to achieve "carbon neutrality" throughout the industry chain has always been a hot topic in the industry.

As the first domestic car company to commit to achieving carbon neutrality by 2045, Great Wall Motors has given its own action plan.

Mu Feng, vice president of Great Wall Motors, said that in order to achieve the goal of "carbon neutrality", the company has carried out a comprehensive energy-saving and emission reduction plan around the entire vehicle life cycle. In addition to the construction of a zero-carbon plant, the "auto industry recycling system" and other measures, Great Wall Motors has made an in-depth layout of new energy core technologies and industrial chains, focusing on pure electric, hydrogen, hybrid and other fields to enhance the application of "green energy". It is expected to launch more than 50 new energy models by 2025.

It is worth mentioning that with the gradual popularization of new energy vehicles, the recycling of power batteries has become an industry issue.

In this regard, Mu Feng said that Great Wall Motors has built a complete battery recycling system. Retired batteries and scrap batteries and pole coil wastes from the battery production process can be recycled through the Great Wall Motors recycling network. After being disassembled and broken, they can be refined by hydrometallurgy. Sulfate and lithium carbonate are produced, and then made into precursors and cathode materials, forming a closed recycling loop, promoting the healthy development of the industry, and effectively solving industry problems such as battery safety, residual value and recycling.

In addition, Chen Xuesong, president of Weishi Energy, a subsidiary of Great Wall Motors, emphasized that the electricity used by new energy vehicles must be clean electricity. If they are driven by thermal power, then electric vehicles are not really clean products.

At present, the company is researching new solar technology and actively deploying in the field of clean energy. For example, the new generation of perovskite solar photovoltaic technology has achieved a world record 20% photoelectric conversion efficiency.

Hydrogen energy is a necessary option for "carbon neutral"

As decarbonization and zero carbon have become a global consensus, another new energy track-hydrogen power is also quietly emerging, and hydrogen energy is regarded as the "ultimate clean energy" in the industry.

"The emergence of new energy vehicles makes the automobile industry the first to cut into the topic of carbon reduction. With the further large-scale realization of the development of renewable energy in the future, hydrogen energy will play an important role." Professor of Tongji University, Director of the National Intelligent New Energy Vehicle Collaborative Innovation Center Yu Zhuoping said.

At present, car companies have reached a consensus on the irreplaceable role of hydrogen energy in achieving the "dual carbon" strategic goal, and are actively deploying in the field of hydrogen fuel.

In 2020, SAIC Group announced the industry’s first "Hydrogen Strategy", announcing that by 2025, it will achieve the four goals of "ten, one hundred, one thousand and ten thousand", and to launch at least ten hydrogen fuel cell vehicle products, and SAIC Jie Hydrogen Technology has reached a market value of 10 billion yuan, established a fuel cell R&D and operation team with more than 1,000 people, and formed a production and sales scale of 10,000 fuel cell vehicles, with a market share of more than 10%.

In addition, Geely, Chery, and Dongfeng also have layouts in the field of hydrogen fuel cell vehicles.

Chen Xuesong said, “We are always looking for answers on how to build a hydrogen energy ecosystem. The cost of hydrogen production is not expensive, and the problem needs to be solved in the cost of hydrogen storage-hydrogen transportation-hydrogenation. Find the scale from energy, vehicles, and scenarios. In the operation scenario, Great Wall Motors cannot do everything, so we have established a strategic cooperation with Sinopec, and cooperated with Sinopec to find the landing scene with the "tens of thousands of vehicles". This is also the process of gradual development of the entire industry." (Securities Daily)