This morning, the 59th day after a young worker, 23-year-old Lee Seon-ho, was hit by an open container wall at Pyeongtaek Port, Gyeonggi-do, at the funeral home of Anjung Paik Hospital in Pyeongtaek, Lee's father, Jae-hoon Lee, raised chrysanthemum flowers in front of the statue and said, "Good luck go. 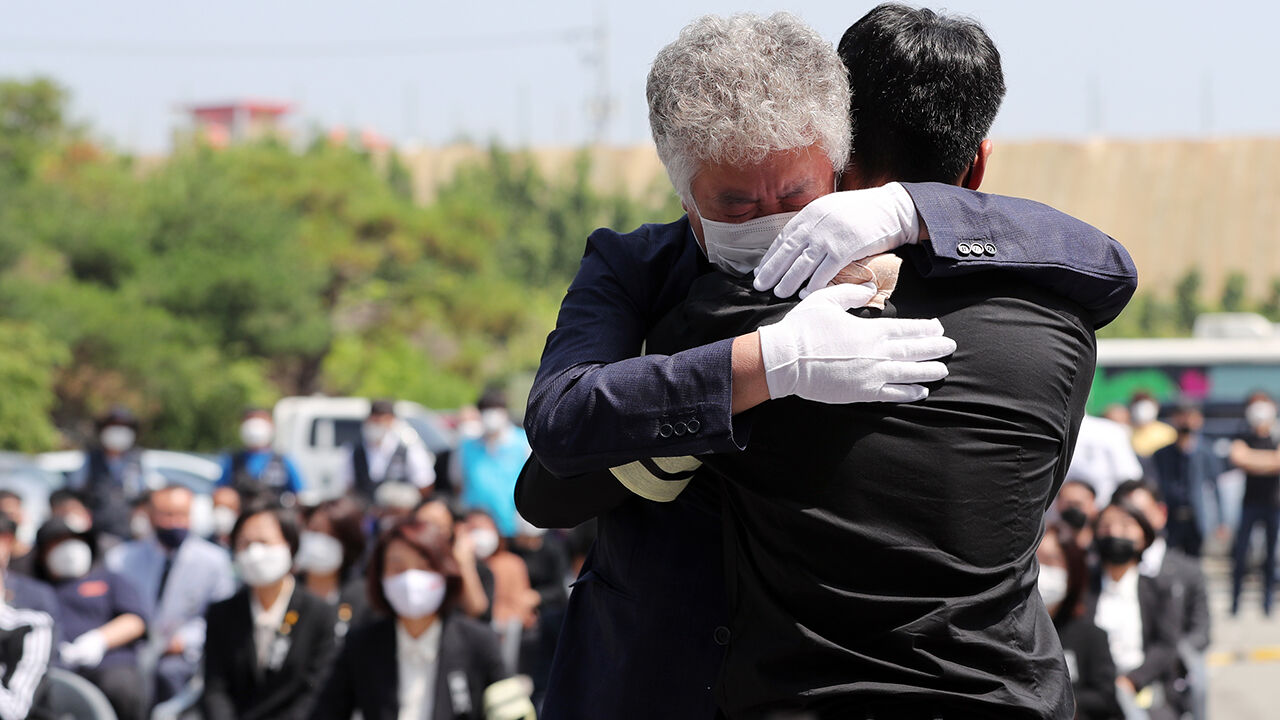 On the morning of the 19th, the 59th day since a young worker, 23-year-old Lee Seon-ho, was hit by an open container wall at Pyeongtaek Port, Gyeonggi-do, and died at the funeral hall of Anjung Paik Hospital in Pyeongtaek, Lee's father, Jae-hoon Lee, gave a chrysanthemum flower in front of the funeral home for the first time in two months. "Go well. You can only live that much... Now go well," I repeated.

Lee's mother, who was making a wreath with her, seemed to have lost her energy and kept only tears.

The funeral, which had been postponed to find out the truth after Lee Seon-ho's death, was held at the Citizens' Hall this morning.

The funeral was held at the funeral, including representatives from the Justice Party, Shim Sang-jeong, Bae Jin-kyo, Kang Eun-mi, and Jang Hye-young, as well as political figures such as Lee Tan-hee of the Democratic Party of Korea and People's Strength Representative Yu Yu-dong, Yang Kyung-soo, chairman of the KCTU, Kim Yong-gyun Foundation CEO Kim Mi-sook, and bereaved families. About 200 people attended.

Yang Kyung-soo, chairman of the Confederation of Trade Unions, said in his memorial service, "We learned that workers in each field have been driven to death after Guui Station Kim Gun, Kim Yong-gyun, and Kim Han-bit. I found out that it wasn't," he said.

Chairman Yang said, "If we had realized and cared about it sooner, they would have been with us." "We will march to the Blue House carrying the statues of the 355 who died after the enactment of the Serious Disaster Punishment Act. We will demand that there be no more workers being sacrificed." “He said.

Yeo Young-guk, president of the Justice Party, said, "The 300kg iron hit the 23-year-old youth, shattered hope in life, and shattered our feelings of trying to stop the second and third Kim Yong-gyun." It is a tragedy in a world where only the workers who worked with them are punished.”

While the battle for truth surrounding Mr. Lee's death continued, the friends who continued to guard Mr. Lee's burial place also sent off his friend's last path through a memorial service.

A friend said, "I'm really sorry that Sunho, who really hated the cold, couldn't leave this world and stayed for a long time in the cold mortuary." "I hope that Sunho is happy and waiting with only good dreams, and I hope there will be no more tragedies like this in this land." I cried.

Father Lee Jae-hoon said, "There were moments when I wanted to give up everything after Seonho left, but for two months, people I didn't know by name came out and helped me like my own work and helped me to overcome my weakening heart." "With all of you who gathered here today, I am sincerely grateful to the people,” he said, bowing his head.

He continued, "Even though my child has lived for 23 years, I feel proud as he has given this society and the world a lot of homework and left, so I feel proud. I want to cover it up,” he said.

The bereaved families of the accident's original contractor, 'Dongbang'After serving the old age in front of the Pyeongtaek governor, Mr. Lee's remains will be placed in Seoho Memorial Park.

On the afternoon of April 22, while carrying out tree removal work in the 'FR (Flat Rack) container' (an open container with only the front and back fixed without a ceiling) in Pyeongtaek Port, the forklift suddenly folded the left wall. As a result of the impact, the right wall fell and fell under it and died.

According to the current law, when working with containers of a certain size or larger, it is necessary to plan in advance and prepare necessary safety measures before starting the work, and when a forklift is mobilized, a signal must be assigned. This was not followed properly.

On the 15th, the police arrested five people, including a member of the East, on charges of manslaughter and negligence on the job.