Elena Arzak: "Now it is my father who asks permission to go home"

His last name and cuisine are almost the same. A worthy heir to her father, Juan Mari, she is one of the great gastronomy of the country and, after the closure in 2018 of Sant Pau de Carme Ruscall 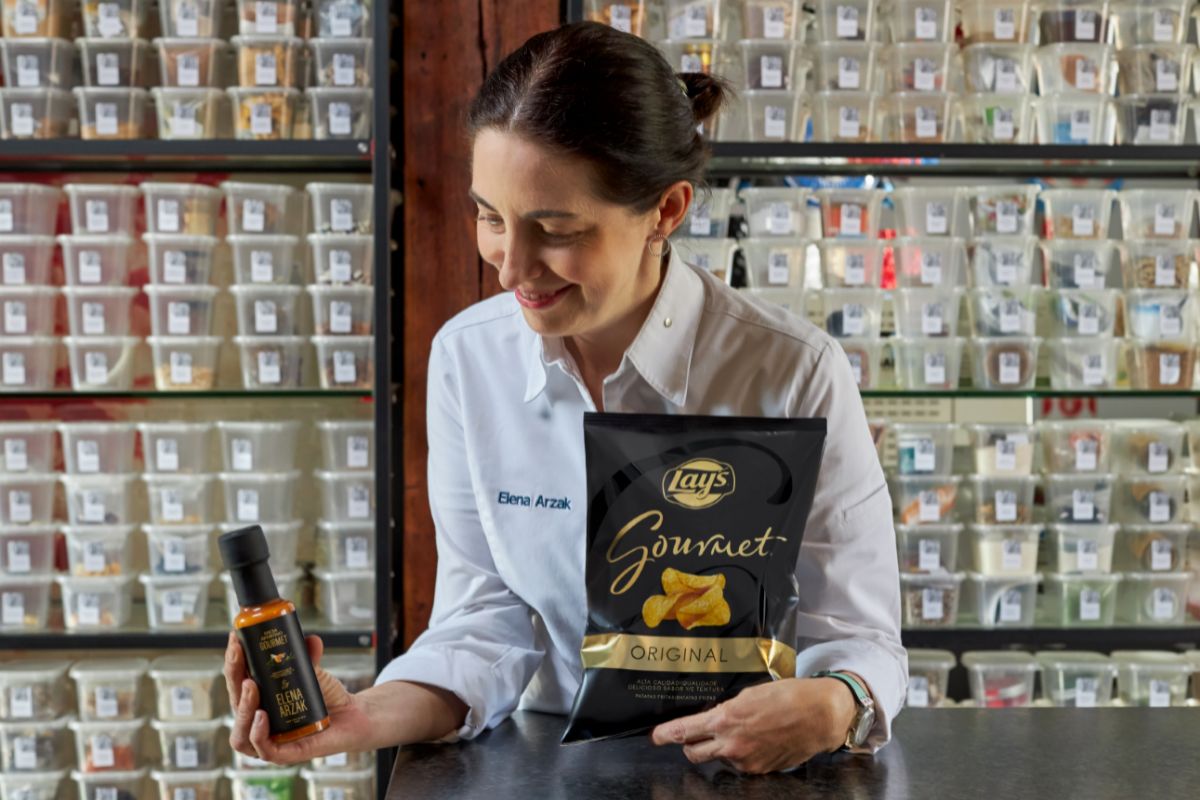 His last name and cuisine are almost the same.

A worthy heir to her

, Juan Mari, she is one of the greats of the national gastronomy and, after the closure in 2018 of Sant Pau de Carme Ruscalleda, the only chef in Spain to lead a three Michelin stars.

(San Sebastián, 1969) walks a bit nervous these days, with those "good nerves" that one has

Less than two weeks ago the

after months stranded by the pandemic and has just launched the

that it has created to pair with

and turn the aperitif into a gastronomic experience.

"At Arzak we feed 60 people, but preparing a dressing aimed at such a

wide audience has been a challenge

. We have done many tests to achieve the

we wanted; a sauce that could be poured well over the potatoes , because the idea is to

eat it with them

", explains the chef. "Its main ingredient is

and a touch of nori seaweed." This is

For Elena, the inspiration to create the

came with the sea breeze, it could not be otherwise, with marine cuisine being one of the pillars of her San Sebastian home.

"When I can, I usually go to the beach. I love looking at the sea, feeling its breeze and eating chips. It's true! I'm not kidding! So I thought: Why not make a sauce that

and that Aperitif moment so nice for me? "

Elena with the Gourmet Appetizer Sauce that she has created for Lay's potatoes.

Said and done, although not as fast as it seems. "It has been a

. The key was to find the balance between all the ingredients and the

." After a lot of testing and spinning in Arzak's lab and his bank of over 1,000 flavors,

Elena and her creative team came up

with the recipe. "The result is a fresh, tasty sauce, made

and that goes very well with the salty and crunchy potatoes". It is a limited edition, for sale on the brand's website (9.99 euros, shipping costs apart) and, shortly, at physical points of sale.

The chef has had some

, her family, led by Juan Mari.

"They loved it. I think this sauce could be perfectly put on Arzak."

He continues: "It has been a lot of fun, but, above all, with the restaurant closed,

it has helped me escape from what we were experiencing,

Today, with the dining room running -it started on May 28-, there are no escapes that are worth it, especially after the

with which Juan Mari Arzak announced the opening,

And inspired by that message, in Arzak they have rolled up their sleeves and got to work.

Juan Mari and Elena, in the Arzak dining room.SARA SANTOS

How was the return? Wonderful. During these months, customers have had to change their reservations several times and they have been very understanding, far from being a problem, they encouraged us. And the reunion was beautiful, just like the video of

. For me it is very nice to see the illusion that he has. The economic impact has been brutal for the entire hospitality industry; It will take time to recover, but no one takes away our desire. The night before the reopening I could not sleep with emotion ... In that time we have all changed a little, Arzak too? The protocols mark our way, our organization, and I don't think they will disappear so quickly. From now on we are going to be time managers, to be aware of the movements of clients, of when they will be able to move. On the other hand, I believe that today we are more supportive; less individualistic and we seek to make more pineapple. Are there changes in gastronomy? Even before the Covid there was a global concern for the environment. I think that the kitchen is going to follow this trend of respecting nature, of energy efficiency,to help local producers, to rediscover ingredients that tend to disappear ... For example, we have a dish -'Egg with carraón wheat'- for which we have recovered a primitive cereal. I call that rethinking, and we've been at it for years. It is about rescuing valid things from the past but always looking to the future and remembering that eating is a pleasure.

The chef with his team in the kitchens of Arzak (San Sebastián) .MIKEL ALONSO

If this cook knows something, it is that quality and innovation have to go hand in hand with flavor and enjoyment.

He learned the premise from "very young", during those summers he spent with

in the family restaurant, led by Juan Mari Arzak, one of the founders of

And, as the Arzak are of precocious vocations, Elena was immediately clear which was hers.

art and gastronomy advisor to

the three Michelin stars], and I, at 15, knew that I loved being in the restaurant and that I wanted to dedicate myself to the hospitality industry ".

He studied in Switzerland

, he joined the family kitchen.

His father "has always had that ability to

and in me he did from the beginning. One of the reasons why I stayed in Arzak was because he knew that I could do many things and that

they would let me do them

-Did you consider working with other chefs?

I have never regretted it

. If I hadn't had those offers, maybe I would have been left with

, but that's how I was convinced of my decision.

Elena and Juan Mari have been in tandem

; yes, each with their own style. "He likes to mix more ingredients and I less; he is more of spices; I, of forgotten products. Although we are very different, when it comes to cooking,

we both decide right away

and, when we try something,

. It's a lot of fun" . Fun and fruitful, because they have achieved that tradition and avant-garde; innovation and flavor and signature and market cuisine are

In recent times, a

"Little by little, logically, due to age, he has cut his work hours, although he comes every day and, for me,

everyone is a gift

He expands: "As long as my father is still here, he will continue to be my boss, I can't help it and, furthermore, I love it. He

. I am amused, now it is my father who asks permission to go home," he comments between laughs the chef, whose fetish products are

"like Arguiñano. Sorry, but I use it a lot."

He has worked with his father for half his life, it will not have been easy ... When you work with the family, things are said more directly. Anyway, I think that as we are very different we have gotten along very well. My mother, Maite, who is already retired but was 50% of the restaurant and worked in the dining room and in finances, also usually comes here. He is very brave and has always advised me well. Do you remember any paternal scolding? I once made him some fried chickpeas, there were five varieties. He liked them and told me to serve them the next day, but I didn't write down the ones he had used! I spent days repeating the dish until I found them. Again, don't ask me how it happened, we ran out of salt and the bar across the street had to give it to us. I was very amused; none to him. He got very angry because I was laughing ...We fight every day, but I adore him, thanks to the fact that he believed in me, I'm here today, and he made sure that everyone found out about his talent, he kept propagandizing me, he spoke tirelessly about me to everyone. I remember it with great affection and it was very beautiful. The insistence was such that people got used to me and trying my things. Has being the daughter of ... In the beginning, yes. But I knew what would happen. I have also unintentionally judged other children of ... He is human and normal. After so many years and with the support of our team, which also helped me to have confidence in myself, I knew that I would change. My father told me that if I was constant and hardworking, people would eventually realize that I was not there to be and how passionate I was about cooking. How have you handled the comparisons? When I was younger, they affected me more,but it is the law of life and there is no need to be offended. I wear them well and it is an honor that they compare with him. In this tandem in which they go, what have they learned from each other? He has taught me to be proud of my profession, to seek excellence and to be very constant. He says that he has learned from me new ways and the color in the dishes.

Elena, a teenager, did imagine herself as a cook and "working for many years with her parents, but not how much the kitchen was going to change and that she

had a revolutionary at home

. I am very happy and surprised by what Spanish gastronomy has achieved".

Gastronomy, and she, who has not been left behind:

of the International Academy of Gastronomy;

and Director of a three-star restaurant that, in 1897, was born as a

and tavern, then became a

Three stars who 32 years later keep and whose secrets Elena is clear: "Do not lose the desire to do things,

and have a great team. For me, cooking, traveling and learning about other

and being in continuous evolution".

In that continuous evolution, where is Arzak going?

"Towards what is sustainable

diner is an accomplice

of what we are doing. Today the client asks, wants to know more about the dish and its origin and is

looking for an experience, not just eating

-You are the fourth generation of cooks and the mother of two teenagers, will there be a fifth generation?

-I would love to, but they are the ones who have to choose.

Since the age of 5 I have taught them to cook, to eat healthy, for survival, to respect the kitchen, so that when someone knocks on their door they can offer them something delicious and share it.

That's what they taught me.

GastronomyFour new restaurants that deserve more than one visit

GastroJavier Estévez: "I make offal even for those who don't eat offal"