"The result of the compromise of the court groups": what role did Vasily Shuisky play in the history of Russia

415 years ago, the coronation of Vasily Shuisky, the last representative of the Rurik family on the Russian throne, took place. According to historians, he was a flexible politician, but not competent enough to govern a huge country. During his reign, Russia was gripped by the Troubles and internal confrontation. According to experts, with his penchant for intrigue and constantly changing testimony in the case of the death of Ivan the Terrible's son, Tsarevich Dmitry Vasily Shuisky, only exacerbated the negative processes in the state. 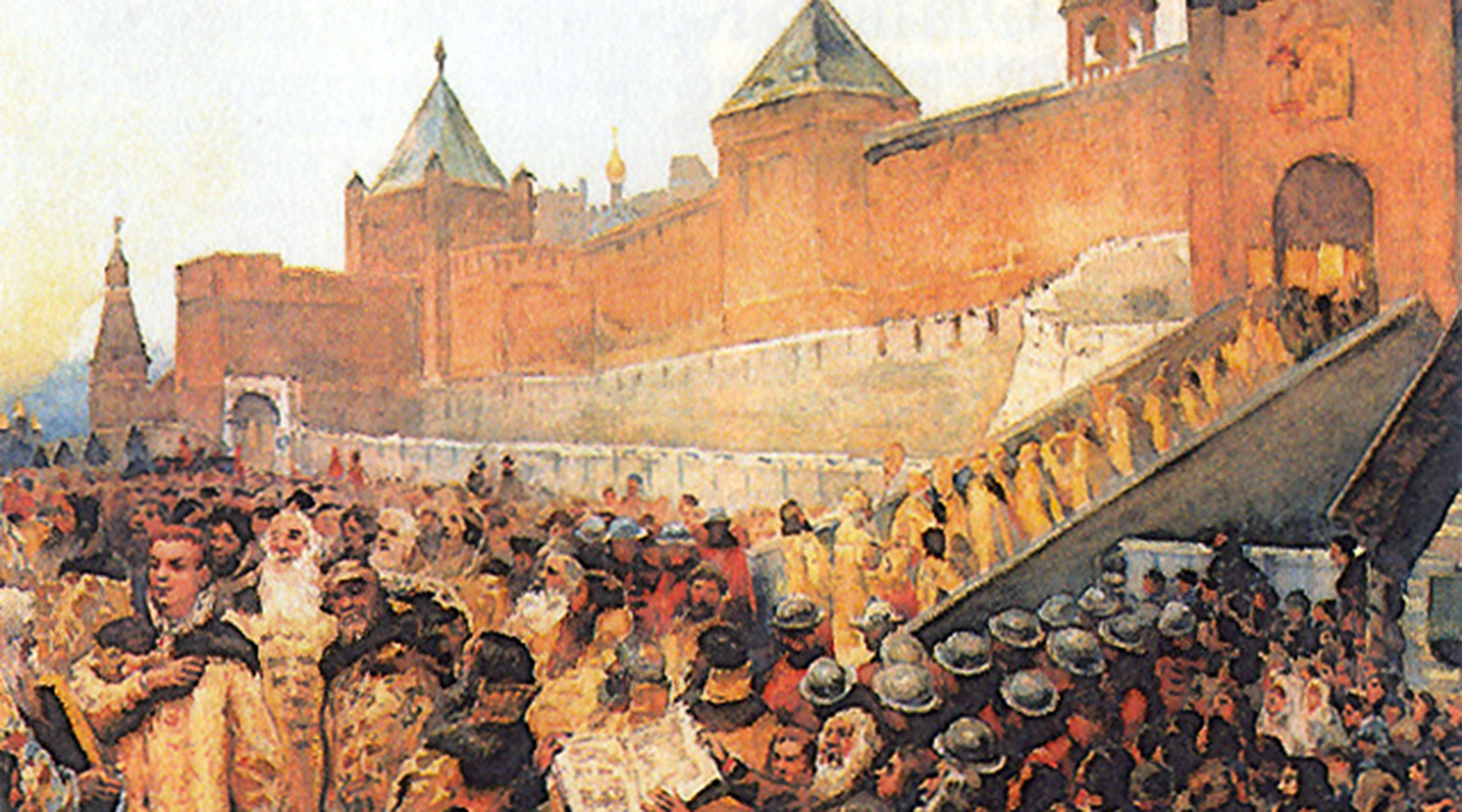 On June 11, 1606, Vasily Shuisky, the last representative of the Rurik family on the Russian throne, was crowned king.

The path to the throne

Vasily Shuisky was born around 1552.

He belonged to the family representing the Suzdal branch of the Rurikovich.

According to one version, he was a descendant of Andrei Yaroslavich, the younger brother of Alexander Nevsky, according to another, he descended from the Grand Duke Alexander himself.

Vasily was the son of Ivan Shuisky, a prominent statesman of the era of Ivan the Terrible, governor and head of the Oprichnaya Duma.

In the 1570s, Vasily Shuisky became a steward at the court of Ivan the Terrible.

Despite the tsar's distrust of representatives of noble families, his career was successful.

Later he held high positions in the army, and in 1584 became a boyar and head of the Moscow court order.

A year later, he was appointed governor of Smolensk.

For some time Shuisky was in opposition to Boris Godunov, who actually ruled the country under the son of Ivan the Terrible, Tsar Fyodor. He was recalled from Smolensk, confiscated and sent into exile in Galich for several years. Opal for Shuisky ended in 1591, when he returned from exile with the restoration of his rank and possessions. Soon he was entrusted with a delicate mission: Shuisky proclaimed a commission sent to Uglich to investigate the death of Tsarevich Dmitry, the youngest son of Ivan the Terrible. Shuisky initially called the death of the Tsarevich accidental, but then repeatedly changed his testimonies on this issue.

Subsequently, Shuisky served for several years to Boris Godunov: he was a voivode in Novgorod and participated in the Serpukhov campaign against the forces of the Crimean Khanate, as well as in hostilities against the troops of False Dmitry I. In 1598, he supported the candidacy of Boris Godunov during his election as tsar. At the same time, according to historians, Godunov did not completely trust Shuisky. This was expressed, in particular, in the fact that the king did not allow him to marry a second time, the first wife of Shuisky died childless. According to historians, Boris Godunov did not want to increase the number of potential contenders for the Russian throne.

In 1605, after the death of Boris Godunov, Vasily Shuisky began spreading rumors that Tsarevich Dmitry allegedly survived, and the commission's conclusions about his death were "forgery."

When in Moscow there was an uprising against the son of Boris Godunov Fyodor, Shuisky joined the party that went over to the side of False Dmitry I and "recognized" the son of Ivan the Terrible.

However, soon after that, Shuisky began to prepare a conspiracy against False Dmitry, was extradited and sentenced to death, which was then replaced by exile in Galich.

A few months later, False Dmitry forgave Shuisky, allowed him to return to Moscow and made him the steward at his wedding with Marina Mnishek.

“The fall of the Godunovs and the accession of the first impostor did not resolve the socio-political crisis that led to the Troubles. The contradictions have not only become aggravated - they have been supplemented by new ones. There was an influx of immigrants from the Commonwealth, pursuing their own selfish goals. There were rumors about the oppression of Orthodoxy and the impostor's secret sympathies for the Catholics. Disappointment reigned in the "natural sovereign" who promised a lot and fulfilled little. For the representatives of the boyars, False Dmitry served as a weapon against the Godunovs and was no longer needed. By May 1606, all this had intertwined into a tight knot, which should have been cut, and not untied, "Professor Igor Andreev, head of the Department of Patriotic History of the IGN MGPU, told RT in a commentary to RT.

Shuisky initiated a new conspiracy, in which he attracted members of the Boyar Duma, nobility and fighters of the noble detachments gathered in the capital before the war with the Crimean Khanate.

Muscovites revolted against the Poles who arrived at the wedding of False Dmitry.

During the riots on May 27, 1606, the participants in the conspiracy prepared by Shuisky entered the palace and killed False Dmitry.

On May 29, 1606, Shuisky was proclaimed tsar at an impromptu cathedral, in which elected representatives of noble groups and the Moscow posad participated, and on June 11 he was crowned king in the Assumption Cathedral.

There is no single opinion among historians regarding the legitimacy of the election of Vasily Shuisky as Tsar.

“To hold a full-fledged Zemsky Sobor, it needs to be organized, to wait until representatives from different cities and lands arrive.

Who could hold it then?

It was necessary to quickly resolve the issue of power, so it was decided by Vasily Ivanovich in his favor.

The election was as legitimate as possible in extraordinary circumstances, "said Yevgeny Pchelov, associate professor of the Russian State Humanitarian University, in an interview with RT.

“Even if we compare it with the election of Boris Godunov, no procedures for election to the throne were followed at all.

From this point of view, Shuisky was an illegitimate tsar, although from the point of view of family ties, he really, as a representative of one of the older branches of the Rurikovich, could claim the title of tsar.

“The election of Shuisky is, on the one hand, the result of a compromise between the court groups, on the other, the activity of Shuisky himself, who, as the main player, was not going to lose the thread of events.

The autocracy of Ivan the Terrible with extrajudicial disgraces and executions made the ruling elite dream of guarantees.

Shuisky announced his intention to give them.

His oath-kissing record contained a promise to rule together with the Boyar Duma and to punish only in court, "Igor Andreev explained.

According to him, Shuisky, for various reasons, was not recognized as tsar in a number of regions of the country.

Many continued to believe in the "natural king" Dmitry Ivanovich, especially when the rumor about his miraculous salvation was widely publicized.

The appearance of impostors acting on behalf of "Tsar Dmitry" exacerbated the split in society, turning it into a civil war.

Having ascended the throne, Vasily Shuisky again changed his position on the death of Tsarevich Dmitry.

He admitted his death, but began to call the incident a murder on the orders of Boris Godunov.

Shuisky exposed false Dmitry I as an impostor.

He fired the voivods who had shown loyalty to him, put the ambassadors who arrived to him under arrest, and sent the aristocrats who supported him into exile.

Shuisky raised the status of the district nobility, and also raised the salaries of the serving nobles and archers.

However, he failed to consolidate the country.

Vast territories in the south of Russia and in the Volga region did not recognize him as tsar.

In 1607, False Dmitry II opposed Shuisky, relying on participants in peasant uprisings and mercenaries from the Commonwealth.

In the spring of the following year, he defeated government troops and in July 1608 set up camp in the village of Tushino near Moscow.

By the fall, most of the country's territory was out of Shuisky's control.

“The Tushino confrontation lasted for a year and a half, which testified to the unstable balance of power.

To get an advantage, Shuisky agreed to conclude an alliance with Sweden and at the cost of territorial concessions under the Vyborg Treaty received military assistance, "said Igor Andreev.

Enlisting the support of the Swedes, the troops loyal to Shuisky won a number of victories in 1609 and liberated the largest cities of Russia from the Tushins.

The siege from Moscow was lifted, and False Dmitry II fled to Kaluga.

“The win turned out to be temporary.

First, the treaty gave rise to the Polish king Sigismund III to openly intervene in the events of the Troubles.

Secondly, the liberation of Moscow and the collapse of the Tushino camp removed the threat from False Dmitry II.

But now Shuisky, who was tolerated for fear of seizing the capital by the Tushins, was no longer needed by anyone.

This circumstance predetermined the fall of the "boyar tsar", for whom few wanted to fight, "Igor Andreev emphasized.

In July 1610, Shuisky's supporters were defeated near Klushin by Polish-Lithuanian troops.

“The further fate of Shuisky was decided.

Even before that, he was not popular and did not control the entire territory of the country, but after the defeat at Klushino his authority dropped literally to zero, ”said Vitaly Zakharov.

On July 27, 1610, members of the Tsar's court and the Boyar Duma, against the background of popular unrest, decided to remove Vasily Shuisky.

The overthrown king was forcibly tonsured into a monk.

A regime known as the "Seven Boyars" was established in Russia.

Subsequently, the Duma extradited Shuisky to the Poles, who took the former ruler of Russia to the Polish-Lithuanian Commonwealth and demonstrated him as a trophy.

On October 29, 1611, Vasily Shuisky died at the castle in Gostynin.

“Shuisky played the role of a temporary assistant on the throne. It was a weak, unsuccessful ruler. His reign is the peak of the Time of Troubles, plural power and political anarchy. With his intrigues and the spread of constantly changing versions of the death of Tsarevich Dmitry Shuisky, he sharply exacerbated the already difficult situation in the country, ”summed up Vitaly Zakharov.