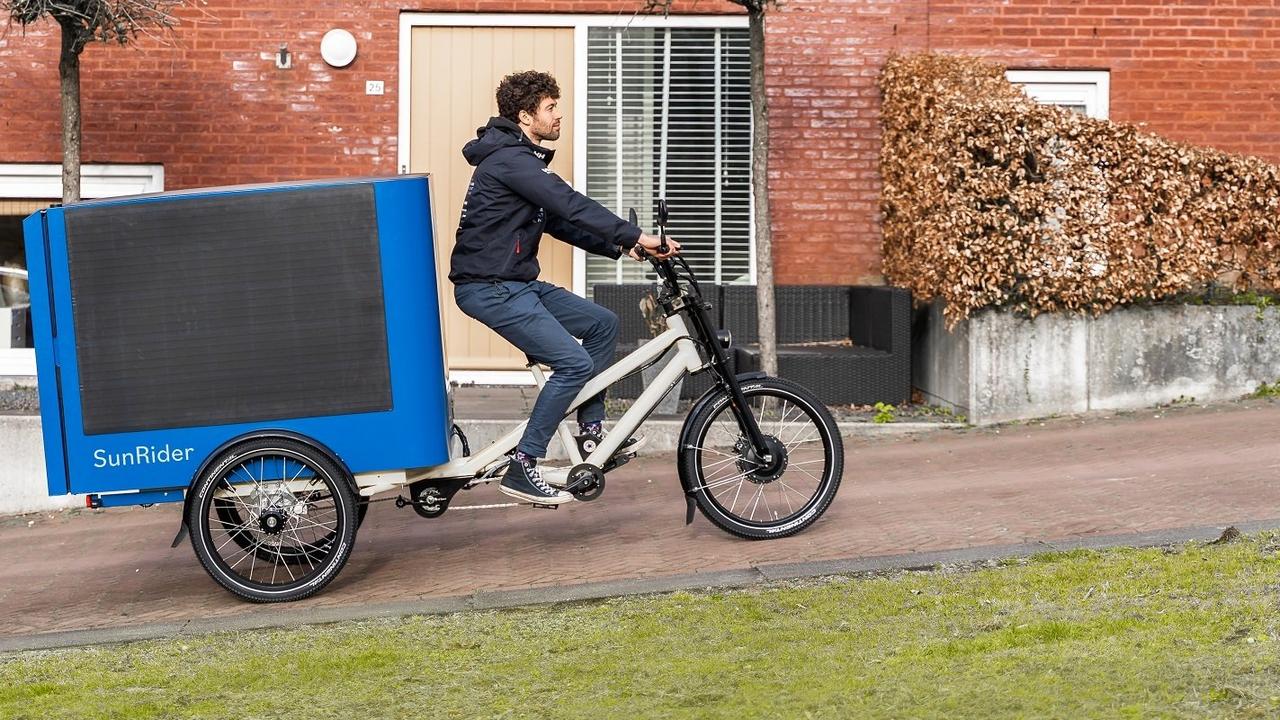 The first solar-powered electric cargo bike is a fact: it's called SunRider and is a Dutch invention.

The electric cargo bike is not cheap, because it costs 14,500 euros.

According to the makers, the SunRider's solar panels can bring in at least half the energy needed for a daily delivery service.

The cargo area with integrated solar panels is positioned behind the rider.

This is therefore a professional cargo bike with a loading space of 1 cubic meter.

That is considerable, although there are electric cargo bikes that offer even more.

The loading floor is large enough for a Euro pallet and the bicycle's load capacity is 150 kilograms.

Furthermore, the cargo bike has a powerful 250 watt electric motor and an exchangeable 1.6 kWh battery.

It is fed by solar cells with a power of 545 watt peak.

The built-in lighting makes the SunRider also usable in the dark hours and a screen gives the cyclist insight into the routes traveled and energy yield.

"This is the world's first cargo e-bike to use solar energy," said Chris van Houdt, one of the founders and Chief Energy Officer of Need The Globe (NTG). The mission of this Dutch company is "to develop a planet-oriented bicycle movement in combination with sustainable energy". NTG strives to get as many people as possible to cycle and to provide cyclists with clean energy. The team worked on the development of the SunRider together with TNO, TU Delft, Mobility Design Lab and UNStudio.

If that is not green energy, such a cargo e-bike will still cause CO2 emissions.

The SunRider reduces those emissions by at least 50 percent, the initiators promise.

Compared to a vehicle with a diesel engine, the profit is as much as 95 percent.

Numerous Dutch companies and knowledge institutes have contributed to the development of the SunRider.

Numerous Dutch companies and knowledge institutes have contributed to the development of the SunRider.

Dutch cities may introduce a zero-emission zone from 1 January 2025.

The condition is that they announce this at least four years in advance.

New delivery vans or trucks that are registered from that year onwards, may then only enter city centers if they do not spread exhaust gas.

This has been laid down in the Climate Agreement and should result in CO2 emissions in the Netherlands being reduced by 49 percent in 2030 compared to 1990.

Partly because of this development, electric cargo bikes are increasingly popular with courier services and parcel deliverers.

Companies such as DHL, Coolblue, Fietskoeriers.nl, ANWB Wegenwacht, PostNL, DPD and DHL already use cargo bikes, especially in and around large cities.

Solar panels are getting cheaper and more efficient

As early as 2014, entrepreneur Ron Oei from Velp developed a solar-powered cargo bike, but it never made it to the market.

According to Van Houdt, the fact that such an e-bike is now being introduced is mainly due to the fact that solar panels have become more efficient and cheaper at the same time.

"Moreover, they can be increasingly integrated into moving objects."

Although solar panels are getting cheaper, the SunRider with its price of 14,500 euros is not cheap, although the prices of other electric cargo bikes are now also quickly approaching 10,000 euros.

Van Houdt: "We like to refer to the 'comparable' cargo e-bikes from, for example, Urban Arrow, Rytle, Fulpra and Cargo Cycling, where our SunRider charges itself with clean energy as an added value."

"These are business cargo e-bikes with a considerably larger cargo box and thus a greater load and carrying capacity than that of the small (family) cargo bikes that are used for other types of transport." Van Houdt thus refers to Babboe's electric cargo bikes, for example, which you can buy for around 4,000 euros.