To the northwest of the province of Burgos, the Ebro and Rudrón rivers have been drilling this corner of Castilla y León for millennia and drawing a spectacular landscape of steep canyons, vall 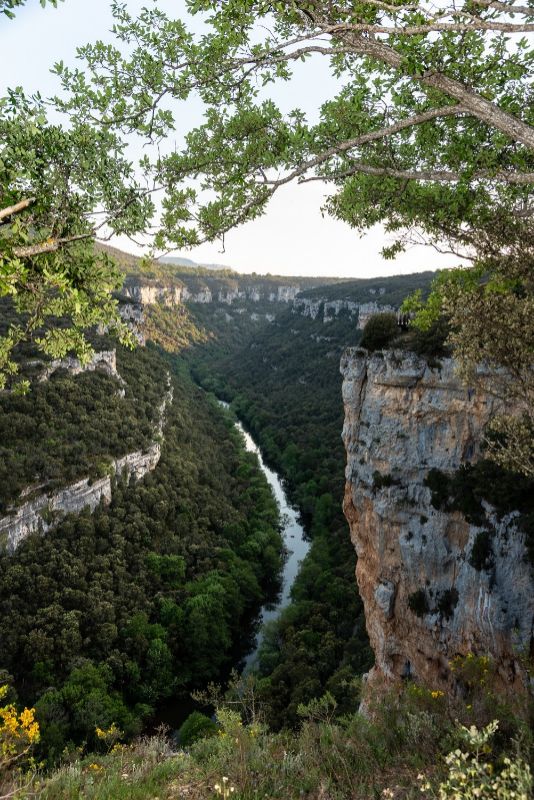 To the northwest of the province of Burgos, the Ebro and Rudrón rivers have been drilling this corner of Castilla y León for millennia and drawing a spectacular landscape of steep canyons, valleys embedded between steep gorges, lakes, springs and waterfalls.

All this forms a protected natural space, that of the Hoces del Alto Ebro y Rudrón Natural Park, of 46,373 hectares, which also houses a great biodiversity of flora and fauna and multiple and valuable geological and geomorphological attractions.

We show five reasons to escape to this place for a weekend and discover all its charms.

Throughout the Natural Park there are many must-see places. Among them are

the viewpoint of the Ebro Canyon

, considered one of the most beautiful corners of Spain. It is less than two kilometers from the fishing village of Ebro. Although there are more viewpoints, it is easily accessible by car (there is parking). The views from this balcony over the river and the rest of the place are magnificent. About 500 m outside Covanera is

, a spring that pours its crystalline waters into the Rudrón River. It is a small pond, but with considerable flow, where many residents go to bathe in summer. It is one of the most visited corners of the Rudrón Valley and a paradise for lovers of cave diving, since there is a cave that submerges under water and can be accessed by diving.

Another essential stop is

, a spectacular spring that forms a waterfall that runs through part of the town of Orbaneja del Castillo until it falls on the waters of the Ebro. On the other side of the river, La

, is an architectural construction popular that served both to mitigate the summer heat and the winter cold.

It can be reached by car and, from there, the views are incredible.

The towns that dot the Hoces del Alto Ebro and Rudrón Natural Park have an immense monumental and cultural heritage that is worth discovering. Among them, the aforementioned

, famous for its manor houses of limestone ashlar masonry with arches at their entrances and superb noble coats of arms on the facades, from the 16th and 17th centuries. It is located on the banks of a meander of the Ebro, and to cross to the other side of the river, it is necessary to cross a medieval bridge that leads to the hermitage of San Antonio. The church of San Esteban also requires a stop. Another must-see town is

, a riverside town founded in the 9th century by the Castilian counts to repopulate this area.

It has several manor houses, such as the Torre de los Gallos, a small castle considered a National Monument.

At the top of the town, the church of Santa María la Mayor preserves some Romanesque elements.

. In a beautiful area of ​​cuttings on the outskirts the Rudrón River and the Ebro meet. There are several viewpoints to observe this postcard landscape. The town is crowned by a pre-Romanesque hermitage dedicated to Saints Elena and Céntola. About 13 km away is

, anchored in the valley of the same name that captivated Miguel de Delibes himself. There, the writer built a house to spend the summers and his memories were captured in some of his books, such as

The disputed vote of Señor Cayo.

In addition to golden stone mansions with noble coats of arms, the town, considered a Historic Site, has a small medieval necropolis.

The options for exploring the area on foot or by bike are enormous.

Dozens of signposted paths connect the viewpoints, the towns and the most beautiful places of the Hoces del Alto Ebro and Rudrón.

There are them for all tastes: shorter or longer, linear or circular, of varying difficulty.

One of the most spectacular is the

, a linear route of 9 km (about 3 hours) that starts from Hoyos del Tozo and ends in Moradillo del Castillo.

It runs parallel at all times along the left bank of the Rudrón along a winding path full of vegetation.

, between Valdelateja and Orbaneja del Castillo, is a 17 km circular path that offers some of the most beautiful views of the gorge and allows you to appreciate the biological and botanical diversity of this territory.

It starts at the church of Valdelateja and along a signposted path enters the Canyon.

This same route can be done by canoe.

The rocky walls that enclose the valleys and rivers are the preferred habitat of an abundant community of rock birds, so the presence of griffon vultures, golden eagles, Bonelli's, eagle owls, Egyptian vultures or peregrine falcons is guaranteed.

It is therefore an ideal place for lovers of ornithology, who will be able to see, with luck, up to 170 species of birds.

The natural enclave is home to various ecosystems, including its magnificent riverbanks, well-preserved holm oak, beech, juniper and some wetlands.

River crayfish, trout, vermilion and some otters populate the rivers.

On June 6, 1964, the discovery of an oil field occurs in Ayoluengo, a tiny town belonging to the municipality of Sargentes de la Lora.

It was a historic milestone, as it was the first time oil had flowed out of the ground in Spain.

Its commercial exploitation started years later and it was active for five decades, until its closure in 2017.

, in Sargentes de la Lora, unique in Spain, recalls this history and, at the same time, delves into different aspects of black gold, such as its geology, its industry or derivatives.

It also functions as one of the interpretive centers of the Las Loras Geopark that occupies part of the space of the Hoces de los Ebro and Rudrón rivers natural park (entrance fee: 2.50 euros;

Rustic hotel with bar and restaurant in Orbaneja del Castillo and surrounded by a beautiful natural environment.

Rooms have free Wi-Fi and balconies with mountain and river views.

In the natural park of Las Hoces del Alto Ebro, in the small town of Pesquera de Ebro, this set of rural houses has all the comforts (free Wi-Fi connection and free private parking).

Each one has three or five bedrooms, from which you can enjoy unbeatable views of the mountains.

(Maestro Santidrian, 15, Valdelateja) is located in a beautiful place next to the river.

It is perfect to have a drink on the terrace with magnificent views or in the dining room, where homemade dishes are served, such as croquettes, Riojan cod or free-range chicken.

Traditional homemade food to have a menu or portions at

* By reserving these accommodations through our website, readers will not get additional discounts or benefits, but they will contribute to the header obtaining a commission for each reservation as an affiliate of the Booking.com program.

The best schools to learn surfing in Somo

PlanesLoarre, the most beautiful castle in Spain

Agenda7 proposals to plan the week