Mark Millar, creator of Jupiter's Legacy: "There are more options for there to be a Super League than for me to return to work at Marvel or DC"

Mark Millar (Coatbridge, Scotland, 1969) speaks fast. At times, on the other end of the phone, he seems even a shy person. An image that contrasts with his work, useful 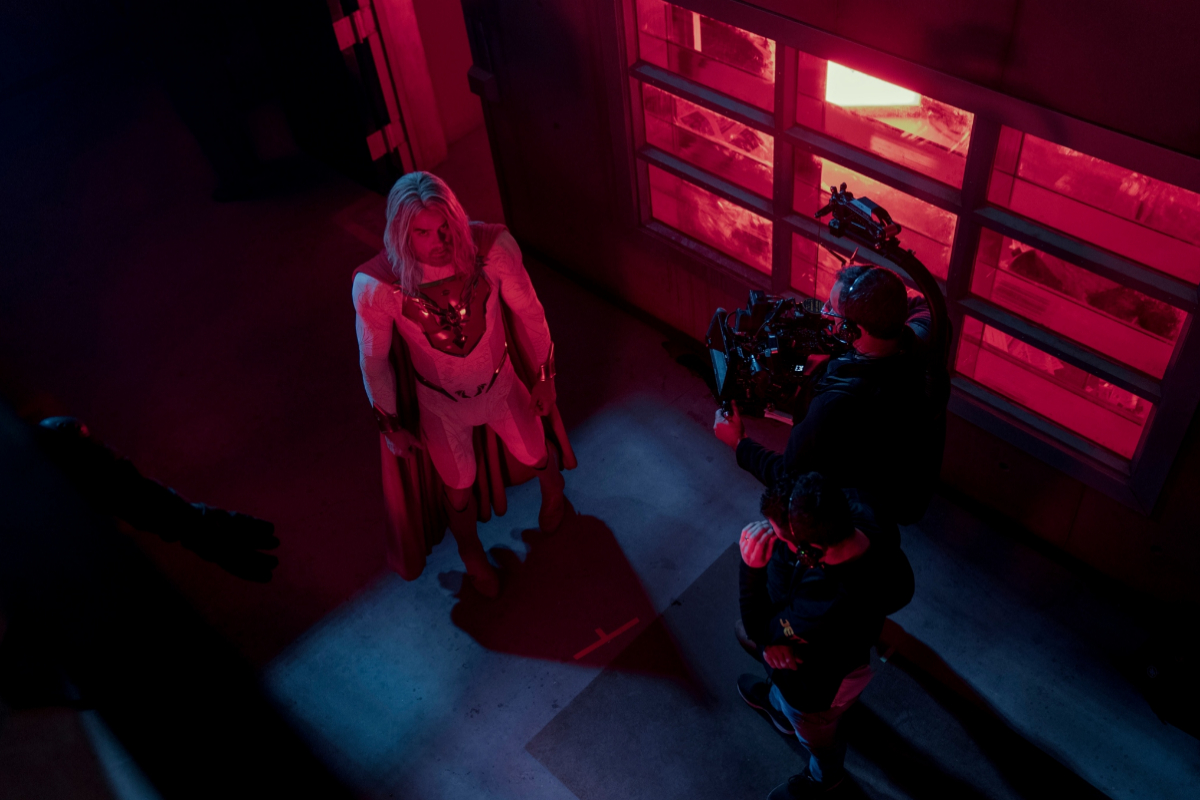 (Coatbridge, Scotland, 1969) speaks fast. At times, on the other end of the phone, he seems even a shy person. An image that contrasts with his work, branded as visceral, provocative or, directly, alienated. It was he who devised a communist Man of Steel (

), an elderly Wolverine who is forced to re-draw his claws to survive (

) or a Marvel Universe with their heroes faced (

). But it was his own-created comics that brought his name to the

became successful films by adapting the prose of the British writer, the same one who in 2017 sold his publishing house Millarworld to Netflix,

eager to have his own superhero universe

, in the same way that Disney has Marvel and Warner Bros. to DC.

premieres on May 7 the first adaptation of a work by Mark Millar,

But ... will they be able to measure up to the greatest divinities on the planet?

The first issue of 'Jupiter's Legacy' was published in 2013, but today we still see how difficult it is to continue the legacy of their parents. You see it in Hollywood, in the sports world, on Wall Street ... Oh, of course. Reflecting on it has been an incredible experience. It is a concept that I love, as I have always told Netflix. And I realized that maybe it is something that one way or another happens to everyone. And if this material had fallen into the hands of another production company, it would have ended up being a two-hour film. And all the reflections, all the characters, would have had to be crowded at that time. But being on Netflix, we have all this space, we play with the fact that we can stretch all these issues that are raised in the first two episodes. And that is wonderful.It's very rewarding. Do you continue to believe that children "always disappoint"? I've had so much of that here in Glasgow in my back garden ... [laughs] I've been inviting all my friends and family, for example, to see something from the series. And before I've done a little gardening because they come and ... Well, they all love the series, which is a good thing, because they are my friends. But on the other hand they all seem to love giving me a hard time, with or without their children, so ... But on the other hand, they are all working together for my future developments. Do you feel like there's a hint of you in the show's villain Walter Sampson? I think he's someone who has had problems with his father. And I'm probably more fun. You see it from the first episode where you have him interacting with his son and he's so strict ...You look at him and you say, "Oh my gosh! Are you kidding me?" Like I told my children, he is doing everything he can to try to make sure the children are safe. But I subconsciously realized that I can't like him. I am a bit more idealistic about the world. I think the world will quickly find out that Walter is a bad guy. And I will never, never, be able to support that.

Twenty years ago, in an interview with Warren Ellis, he commented that "Comic book writers will be the next great discovery. Movies, televisions ... are starting to realize how good we are." In the end you were right, don't you think? We both agreed, and we were both right. What's really interesting about it is that a writer makes you a novel every one or two years, and a filmmaker puts out something every three years. But comic book writers have to do at least two stories a month. In my case and in the case of some of my friends, we have managed to do eight stories in a month. Therefore, the level of work and creativity is so high in that university that is the world of comics that I can understand why Hollywood loves all the people who come from there.The way you sell your products stands out a lot. Of 'Jupiter's Legacy' he has said that it is a mix between 'The Godfather 2', '2001: A space odyssey', 'The Avengers', King Kong ...

is a good reference [laughs]. It's funny, because that was exactly my plan in the first steps of the play. I think in the description of the first panel that I passed to the cartoonist, Frank Quitely, he was saying that he had to see the

from 1933, you know? Because that scene inside a

in Morocco is pure

What do you think when they call him "modern Stan Lee." Likes? Or would you rather be called "the contemporary Jack Kirby" or something similar? Stan Lee is the biggest influence in my life. Saying I look like him is the biggest compliment anyone can pay me. I can't quite measure up, but my gosh, it's like you're an actor and someone says you're the new Jack Nicholson or something, you know? It's like this, damn it, it's the best thing that ever existed, and I think there will only be one like that. It's very interesting, because he's like Calvin Klein, Walt Disney and all these guys have made a brand of his name. And you know they are going to be there for a hundred years. Stan Lee is the only comic book writer you can name someone in a room, and you know everyone around is going to know him. He was someone who had something special.

Ben Daniels gets into the skin of the perfidious Walter Sampson.NETFLIX

How does it feel when you look back and see everything you've done? I never look back. I know it may sound silly, but I never do. I'm always too excited about the next project like when I wake up in the morning. And when I am finally childless and go to my computer, I launch myself into the next challenge. I have never reread anything I have done. And it even happens to me with movies: as I have seen them so many times during the shoot ... I see everything I have done only with my legacy. But since I have seen it as many times as my cats, I am always thinking about the next thing. I have never fought against my own image. Superheroes were born in the United States, but today they are a global phenomenon, a worldwide success. What do you think it is? I think everyone is going through a difficult time.And when people are having a hard time, they want escapism, that's what has always happened. So I consider that

It comes in the best of times in that sense. Because last year there was no summer movie season, we also tried to have the series ready before, but we couldn't. But we already have the characters kicking each other, and I feel like it's going to be amazing We have to be home a lot but now we'll see people flying around and using heat vision And all of that is so exciting I just hope people can see as soon as possible the eight episodes. What can you tell us about the adaptation of 'Supercrooks', the comic that set in Tenerife and that was going to have Nacho Vigalondo as director? Nacho is a great friend of mine. In fact, he and I, since we've been friends, we always end up together, whether it's when I'm in Barcelona, ​​when he's in Glasgow. But this comic has not been made a movie,although that was our original plan. Netflix is ​​now doing with the comic a

The Japanese studio Bones is working on it, so it will be an anime series, which is really exciting.

In fact, I can't wait to see it anymore.

I have been working with them and I have felt that the first season was never ending, because it has 17 episodes and the original comic has only four, so imagine.

What about the comics industry and its adaptations to other media? Are you optimistic about your future? You couldn't be more excited about the future. Every year the movies get a little better. I remember after watching

I thought "How are they going to get over this?" and then 2014 came and there you had

Guardians of the Galaxy

to all these things that came later. And you find that everything is better all the time. Make

as we have done it would have been impossible, but totally impossible, five years ago. Add to that the fact that the audience is so reader and so intelligent in the field of pop culture in general and in the world of superheroes in particular that they force you to go further, to present them with increasingly epic and ambitious things. I think we have many things to see and enjoy. And it is a wonderful thing. We live in a unique moment. John Romita Jr, Brian Hitch, Frank Quitely, Oliver Coipel ... Is there any cartoonist left that you want to work with and haven't been able to yet? Well, there has actually been a merger on my wish list. So I've got back to working with Tommy Lee Edwards, who is an artist that I love and he's doing the legendary in

, which will be out in June, just a month after the series airs. I truly believe that the show is going to be something big and it will be an incredible launching pad for the next volume. And I'm finally doing something with great Travis Charest today. I have always considered him a master designer: I have been trying to work with him for the last 18 years and we have finally been able to start doing something. I'm definitely very lucky in that regard. Right now, what are the more possibilities: that you will write something again for Marvel or DC or that the Super League of soccer finally kicks off? [Laughs] There are literally no possibilities that none of that happens! I like it, I love working at Marvel in DC, but I've seen that I've seen it for years, and I mean Netflix is ​​the most fun place to be.I love my time at Marvel and would want to work for DC my whole life, but as I always say jokingly, that was like when a group of friends put on an amazing night out and then each of them went home and said to themselves , in a wise way: "Boy, you are not going to repeat this." So I think the Super League even has more options.

Are there still options to see a Netflix adaptation of 'Nemesis' and 'The Magic Order'? Oh yeah yeah.

ended up at Warner Brothers, I mean, it's owned by Netflix, but one of them would have the right to launch it.

The eight series to watch out for this week

SeriesThe science of love: Is it possible to find the perfect partner with DNA as proposed by The One?