Route through the Cider Region: the spectacle of apple trees in bloom

The Cider Region is preparing to receive a unique natural phenomenon: the flowering of apple trees, or as the "Floriar del Pumar" is known in those lands. Since mid 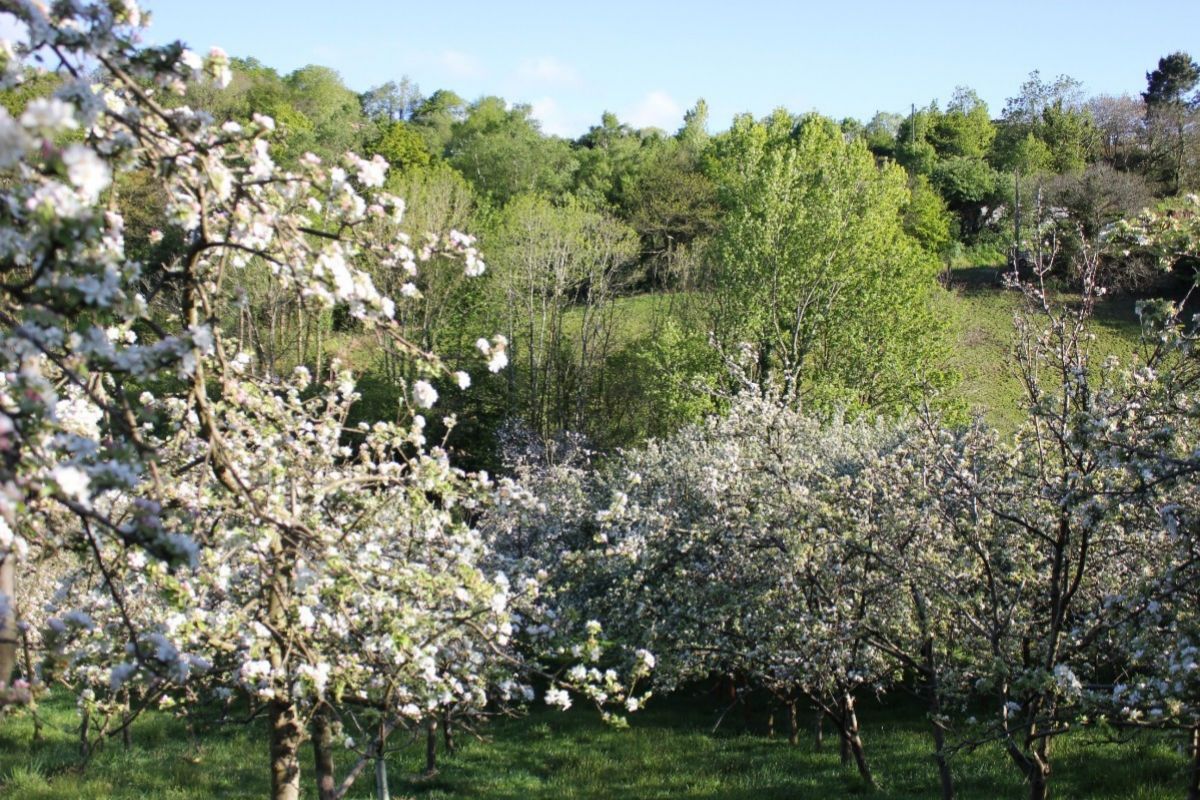 The Cider Region is preparing to receive a unique natural phenomenon:

the flowering of apple trees

, or as the "Floriar del Pumar" is known in those lands. From mid-April to early May, the green meadows and mountain slopes of this southeastern area of ​​the Principality of Asturias are stained in white and pink and are impregnated with a sweet smell thanks to the flowers that grow from the thousands and thousands of apple trees that dot the place, offering a magical picture that has become a true tourist attraction. It is a sign that spring has already arrived in the region, comprised of the municipalities of Bimenes, Cabranes, Colunga, Nava, Sariego and Villaviciosa, some 30 km east of Gijón.

Under normal conditions, the tourist promotion area of ​​the Comarca de la Sidra Association usually organizes a varied program of face-to-face activities around the world of apples and cider around these dates. However, due to the health situation, this year, with the aim of offering an alternative option to visitors who may come closer, a self-guided route has been developed to enjoy the landscape and the region's treasures autonomously by motorcycle, car or bicycle.

The route is just over 70 kilometers

that travel along roads and secondary roads less frequented and pass through charming villages and towns, gentle hills, bucolic valleys and enclaves with incredible panoramic views over the Cantabrian Sea, in addition, of course, through places with large concentrations of apple plantations (pumaradas ).

From Bimenes to Lastres

The tour begins in the southernmost area of ​​the Cider Region, specifically in the capital of

, next to its Town Hall and in front of the beautiful rural palace of Martimporra, an architectural jewel of the 17th century and considered one of the best examples of rural palaces in Asturias.

Right there is the Hermitage of the Virgen del Camino.

Continuing along the AS-251 road, which leads along the foothills of the Sierra de Peñamayor, the route enters the

It is worth making a stop to visit the famous Cider Museum, where you can learn all the secrets of this traditional Asturian drink (entrance: 4 euros).

Connecting with the AS-357, the itinerary arrives, after about 12 km of winding road between meadows, forests and, of course, apple orchards in bloom, to the

, formed by small villages spread out in a valley surrounded by gentle mountains. On the outskirts of town is the beautiful Romanesque Church of Santa María de Narzana, a small temple in a quiet setting that is worth a visit. Returning to the east, the next stop should be the municipality of

, cradle of the best rice pudding in Asturias, not in vain there is a festival held in his honor with recognition of a Festival of Tourist Interest. Connecting the AS-357 with the AS-333, between forests and breathtaking mountainous landscapes, the route continues along the AS-255 to

, Manzanera Capital of Spain, and one of the largest towns in the Region.

It is advisable to park your car to stroll through the beautiful old town, full of sculptures, palaces, emblazoned houses and plenty of places to taste the local cuisine and, of course, cider.

Leaving Villaviciosa (pay attention to the apple orchards that are on the outskirts of the city) by the AS-330 road that goes east through the interior of the council, you will cross dreamlike places, such as Miravalles or San Feliz, until you reach to the municipality of

, the only coastal one of the six that make up the Cider Region. The views of the imposing Sierra del Sueve accompany the road that descends towards Colunga capital, passing through villages such as Pivierda or La Riera, the essence of the most authentic Asturias with farmhouses and centuries-old granaries. The town deserves another stop to explore its narrow streets, especially those surrounding its Town Hall and the Monument Square.

The route ends in the charming fishing village of

, about 4 km from Colunga, one of the Most Beautiful Villages in Spain.

Its viewpoints to the Cantabrian Sea, its historic center with its stately houses and its brightly colored sailor-style houses, its 18th century Clock Tower, its port and its small beach, are reasons enough to make this town the goal of the spectacular tour through the landscapes of the Apple tree flowering in the Cider Region.

Those interested in dinosaurs have another must-see: the Asturias Jurassic Museum, a space that, in the form of a large dinosaur footprint, houses one of the most complete and educational exhibitions in the world about these fascinating reptiles (entry 7 ,20 euros).

Route in times of perimeter closures

To participate in the beautiful landscapes that flowering offers to all those who cannot travel to the destination during those days, the Cider Region has planned the broadcast, in real time via streaming, of several visits to apple orchards with images of this spectacle of nature.

These broadcasts can be followed live through the page www.facebook.com/Comarcadelasidra.

Also, the route through the landscapes of flowering

MadridNi Patones ni Buitrago, El Berrueco, on the banks of the Atazar, is the fashionable town for this spring

4 routes to enjoy Formentera (those who can go) on foot

Plans5 reasons to escape to ski in Switzerland