Gyeongbokgung Palace is crooked and the signboard is wrong... What about the crappy restoration

Not long ago, the Cultural Heritage Administration decided to remove the designated numbers attached to national treasures and treasures, like national treasures 1 and 2. There were various reasons, but one of the backgrounds for the decision was that there was a controversy over the inadequate restoration of Sungnyemun, which was the first national treasure. 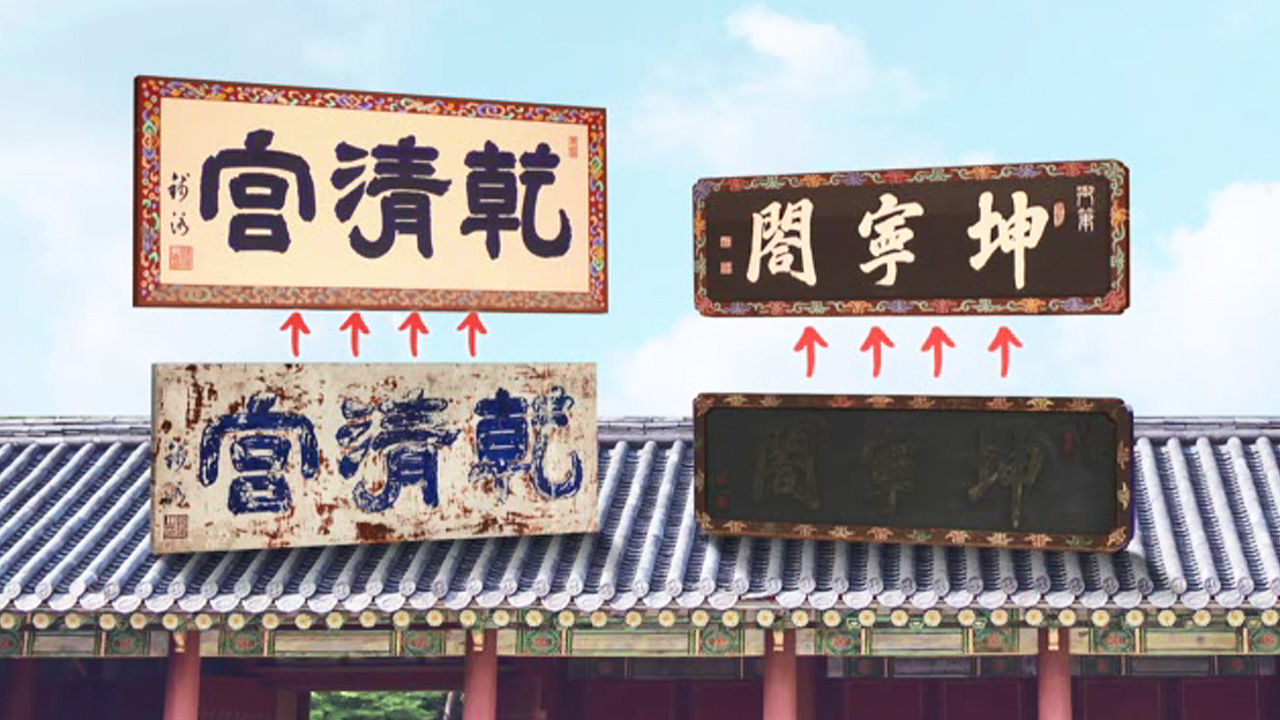 There were various reasons, but one of the backgrounds for the decision was that there was a controversy over the inadequate restoration of Sungnyemun, which was the first national treasure.

Not only this, but the Gwanghwamun signboard was also removed and reattached as some point came out from the restoration project.

So, what about other cultural properties, when we interviewed, there were many problems with the restoration of Gyeongbokgung Palace.

Gyeongbokgung Palace is said to have embodied Joseon's Confucian political ideology according to strict symmetry and proportion.

With the center of Geunjeongjeon, the east gate, Geonchunmun and the west gate, Yeongchumun were symmetrical.

[Hye-moon/Representative of Finding the Place of Cultural Property: The general principle of the palace architecture is that the palace is built with an accurate square symmetric structure of top and bottom, left and right, east, west, north and south.]

However, there was a problem in restoration from these gates.

The Yeongchumun Gate was restored in 1975, nearly 50 years after being demolished by the Japanese imperialism in 1926, but it was restored as a concrete building instead of the original wooden structure.

In addition, the two doors, east and west, are twisted with a broken balance.

Both passages to and from Geunjeongjeon are also crooked.

This is because it was built 50m north of its original place while restoring the western Yeongchumun, which occurred while avoiding the military base stationed at Gyeongbokgung Palace at the time of restoration.

[Hyemun / Cultural Property Find place representative. Sugyeongsa a missing 30 years it is going gotta The fact that gotta round left in broken without restoring balance even now can be viewed as very significant errors and wrong in Cultural Heritage Restore

palaces There is also a serious error on the signboard of the nameplate.

Black on white, white on black, some gold, some blue, jumbled font is difficult to find consistency.

The Cultural Heritage Administration's explanation is that it is difficult to prove what is right, but the signs of Geoncheonggung Palace and Kunryonghap, where Empress Myeongseong was tried, were restored unexpectedly even though there are original plates in the museum.

[Curator: It looks like it was painted gold on a black background.

chopsticks that are placed on the ugly floor to chase mischief are also a mess.

There is no principle such as the number of each, odd or even, and even defective products are mixed here and there.

Charity Hall, the residence of the Crown Prince, was taken out to Japan and restored only after returning to Japan, but compared to the previous photos, it is a bit different.

[Lee Seong-hee / Head of Restoration and Maintenance Division, Cultural Heritage Administration: We were also surprised to see the variety of signs in the palace.

it is difficult to find historical data because it is a detailed and detailed decorative element.]

'Juryun', which is a letter hanging on the pillar of the house of King Gojong, has to be formed in two pieces each, but the order is reversed.

Even at the request of experts, it has been the same for more than 10 years.

[Kim Young-bong/Yonsei University Visiting Professor of Korean Literature: I have to have my own image regardless of whether or not anyone recognizes it, and the original appearance is the most important thing for a cultural property.]

Gyeongbokgung Palace, how much will it be worth considering it?

[Philips/German tourists: Wouldn't it be 2 billion euros (about 2.5 trillion won)?

It is a precious antique and the stone is old.]

[Kim Yoobin/College Student: I think it has a value that cannot be converted into money.]

However, the value of the Cultural Heritage Administration is much lower.

This Geunjeongjeon Hall, where the crowning ceremony of the king in the Joseon Dynasty was held or the great ceremony was held, is designated as a national treasure.

However, according to the'value of state property', which the Cultural Heritage Administration has valued for cultural properties, the value of this Geunjeongjeon's property was only 3.3 billion won.

If the calculated price is too low, there may be a problem as if only 95 million won was covered by insurance money out of the 22.5 billion won restoration cost when Sungnyemun was destroyed in 2008.

Regarding the SBS coverage, the Cultural Heritage Administration announced that it plans to sequentially correct the restoration errors pointed out, and that the insurance price of major cultural properties such as Geunjeongjeon will be realized.