Marshall launches (finally) its first True Wireless headphones, the Mode II and throws itself into the fray of 100% wireless sound 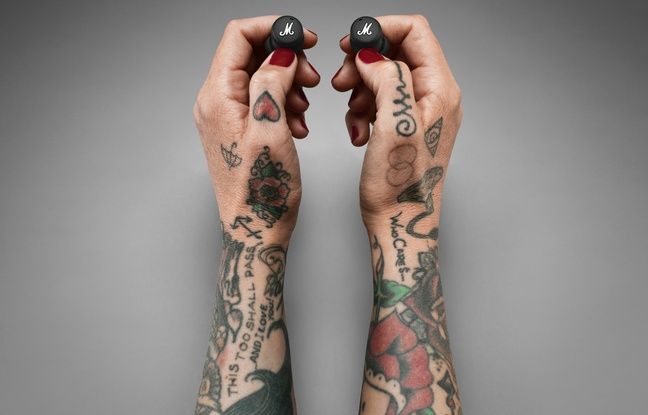 Arriving a little late in this market in which Apple and its AirPods and AirPods Pro set the tempo, Marshall embraces the trend of the moment and invests in a booming sector.

Are Mode II up to their competitors?

With his Mode II, Marshall cultivates his rock spirit.

It's impossible not to succumb to the look of Marshall products.

Since its beginnings in nomadic audio, the manufacturer declines at will its aesthetic codes.

These revolve around the logo of the brand whose amplifiers have taken center stage since 1962, but also a textured black casing.

Let there be rock!

For its Mode II, Jim Marshall's company plays on velvet and thus offers a case / battery with an identifiable design.

A Transparency mode to dose

To be recharged by USB-C (cable supplied) or on an induction charging stand, the Mode II comes to us with four pairs of silicone tips.

The step is important: choose your own.

This can be decisive for comfort, but also for the passive isolation conferred by the headphones which unfortunately do not have an active noise reduction system.

They have physical buttons.

These allow you to play / pause a song;

call up the smartphone's voice assistant, but also activate the so-called “Transparency” mode.

Now common to many headphones, this last feature allows you to perceive outside sound while listening to music.

Simple question of safety to move in the city, for example, or to take part briefly in a conversation… Thanks to the application Marshall Bluetooth, this mode thus offers to adjust on a scale graduated from 0% to 100% the sound level surrounding sounds.

And it works very well.

Iggy Pop in the Loop

Our tests were carried out with many songs taken from our playlist.

The application allows you to personalize listening.

In addition to the Marshall, Rock, Pop, Hip-Hop, Electronic, Jazz and Voice presets available, it is possible to define your own equalization.

What we do, the sound delivered by the headphones seems quite high-pitched to us.

We manage to improve it somewhat.

You Won't Come Around

, there the Floyd and

… The sound is clear and airy.

It is even extremely detailed with a pleasant spatialization, as evidenced by the intro of

But the impression of its very high-pitched sound remains dominant.

Although not basseux, Marshall Mode II lacks a little more warmth and bite in the bass.

With a battery life of 25 hours in total (up to 5 hours per charge), Marshall's Mode II is in the middle range, between Klipsch's T5 II True Wireless (24 hours) and Sennheiser's True Wireless II ( 28 hours).

At 179 euros and available from March 18 (pre-orders have started) their selling price is equivalent to that of the Enco X from Oppo or the Elite 75t from Jabra, two very good models that we were able to test, but which, them , offer an active noise reduction system for the same price.

True Wireless Headphones: How Much Should You Invest to Guarantee the Best Sound?