75 years ago, the former head of the British government, Winston Churchill, delivered the Fulton speech, with which many historians count the beginning of the Cold War. Speaking at Westminster Men's College in the United States, he called for the creation of a "fraternal union of English-speaking peoples" and announced the rise of the Iron Curtain. Outlining the threats that, in his opinion, emanated from communism, Churchill called for speaking with the Soviet Union from a position of strength. According to experts, the Fulton speech had a strong impact on the consciousness of Western elites and largely predetermined the global confrontation between Moscow and the US-led bloc of states. 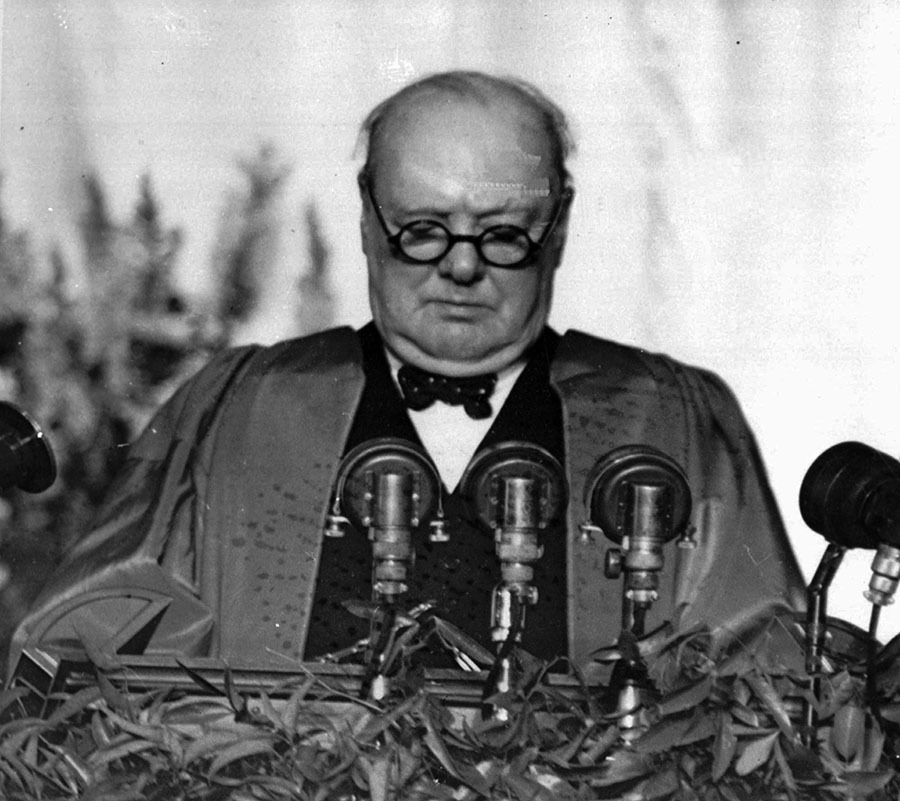 In early 1946, Winston Churchill, who had retired from the post of Prime Minister of Great Britain, arrived in the United States on vacation.

US President Harry Truman invited him to speak at Westminster Presbyterian Men's College in Fulton.

On March 5, 1946, Churchill delivered the speech from which many historians count the beginning of the Cold War.

In his speech, Churchill extolled the role of the United States in world history and called on Washington to confront Moscow.

"The United States of America is today at the pinnacle of power, being the most powerful power in the world, and this can be regarded as a kind of testing moment for American democracy, because superiority in power also means a huge responsibility to the future," Churchill said.

At the same time, according to the British politician, the world was under the threat of tyranny.

He was supposed to be saved by the "fraternal union of the English-speaking countries."

“Stretching across the entire continent from Stettin on the Baltic Sea to Trieste on the Adriatic Sea, the Iron Curtain descended on Europe.

The capitals of the states of Central and Eastern Europe - states with a history spanning many, many centuries - have found themselves on the other side of the curtain.

Warsaw and Berlin, Prague and Vienna, Budapest and Belgrade, Bucharest and Sofia - all these glorious capital cities with all their inhabitants and with the entire population of the surrounding cities and districts fell, as I would call it, into the sphere of Soviet influence, "said British ex-prime minister.

Historians note that Churchill did not invent the term "iron curtain", but borrowed it from one of the ideologues of Nazism, Joseph Goebbels, who in early 1945 predicted the division of Europe after the victory of the Soviet Union in the war.

Churchill emphasized that the communist parties have acquired a huge role in the life of European countries, and recalled that Turkey and Persia feared territorial claims from Moscow.

He called the communist parties outside the USSR "the fifth columns" and called for abandoning the policy of compromises with the Soviet Union.

“Communicating during the war with our Russian friends and allies, I came to the conclusion that most of all they admire strength and least of all respect weakness, especially military.

Therefore, we must abandon the obsolete doctrine of the balance of power, or, as it is also called, the doctrine of political balance between states, ”Churchill said.

“Confrontation with the Soviet Union was Churchill's dream, but Britain, weakened by the war, could not afford it, so the British ex-prime minister decided to engage the United States in this role.

In fact, he pitted the USA and the USSR against each other.

Moreover, between the lines in his speech, not only a cold war is meant, but also a "hot" one, - said Vladimir Vasiliev, chief researcher at the Institute of the USA and Canada of the Russian Academy of Sciences, in an interview with RT.

According to him, Churchill's ideas fell on fertile soil, since the American elites largely shared his views and, moreover, did not want the post-war demilitarization of the country, fearing a sharp rise in unemployment as a result of the mass demobilization of military personnel.

Public opinion in the United States for the confrontation with the USSR was prepared by the so-called long telegram sent on February 22, 1946 to Washington by an employee of the American Embassy in Moscow, George Kennan.

In it, he presented the Soviet Union as a threat to the West and called for a policy of containing Moscow.

In the United States, this document was sent to high-ranking officials and the military.

However, the notes of cooling in relations between the Soviet Union and the Western powers were felt even during the Second World War.

And in 1945, the military headquarters of Great Britain and the United States were preparing plans for an attack on the USSR.

Joseph Stalin reacted harshly to the statements made by Churchill in Fulton.

Hitler started the war by proclaiming a racial theory, declaring that only people who speak German represent a full-fledged nation.

Mr. Churchill also begins the cause of unleashing the war with a racial theory, claiming that only the nations that speak English are full-fledged nations called upon to decide the fate of the whole world, "the Soviet leader said in an interview with the Pravda newspaper on March 14, 1946.

As historians note, after Churchill's public attacks on the USSR, relations between the socialist and capitalist countries began to deteriorate sharply.

“Churchill's statements determined the attitude of Western leaders towards the Soviet Union.

They began to position the West as a stronghold of civilization, which must confront the savage hordes from the East.

The West declared a cold war to the USSR, the arms race began, "Konstantin Blokhin, a researcher at the Center for Security Studies of the Russian Academy of Sciences, told RT.

According to him, such a policy towards the Soviet Union, which suffered huge losses in the fight against Nazism, was completely immoral, but this did not bother Western politicians.

In 1947, Harry Truman formulated a foreign policy doctrine that included military and economic support for non-communist regimes, interference in the internal affairs of other countries, and containment of the Soviet Union.

A year later, the implementation of the "Marshall Plan" began, which implies lending to Western European states and ousting the communists from their governments.

As historians emphasize, in the 1960s, the confrontation between the West and the countries of the socialist camp almost turned into a full-scale military conflict.

During the Berlin and Cuban missile crises, they were on the brink of war.

Representatives of NATO and socialist countries have repeatedly clashed with each other in numerous local conflicts.

In addition, an ideological confrontation developed between the West and the East.

“It was Churchill who actually pushed the United States to promote the American way of life, American values, American achievements,” noted Vladimir Vasiliev.

According to Vladimir Batyuk, head of the Center for Political-Military Studies of the Institute for the United States and Canada of the Russian Academy of Sciences, Churchill's Fulton speech was of crucial importance for the whole world.

“Together with Kennan’s long telegram, the Fulton speech influenced the formation of the thinking of the elites in the United States and other Western countries in the long term, making them believe that it was impossible to conduct a normal dialogue with Moscow,” summed up Vladimir Batyuk.