The Ecumenical Pipeline: How Astronomers Find the Cold Gas Flowing a Massive Galaxy

American astronomers have obtained direct evidence of the existence of cold gas streams from which the stars of massive galaxies were formed in the early stages of the history of the Universe. The discovery was made as a result of observation of the outer sphere of the ancient galaxy and bright background space objects - quasars. 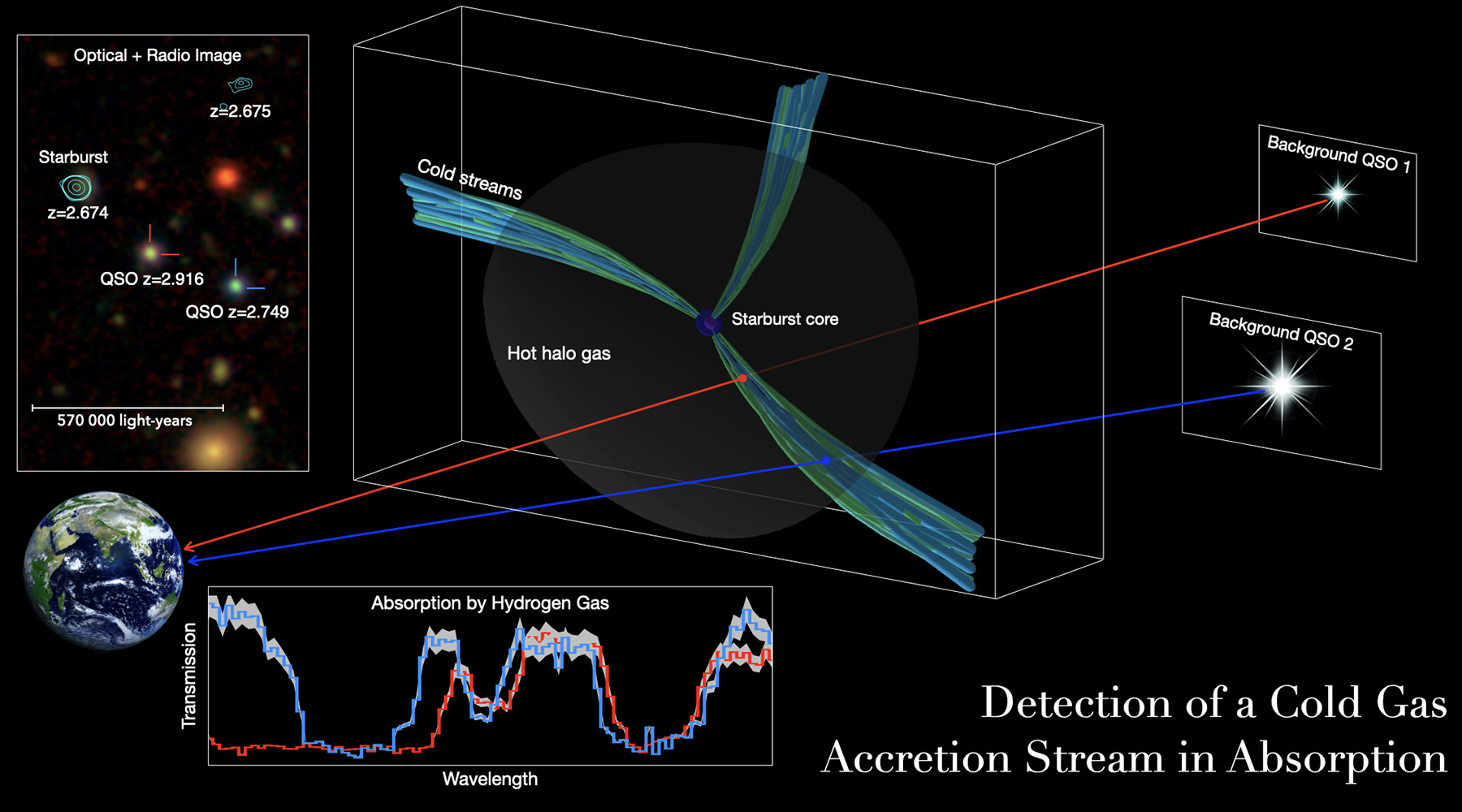 A team of American astronomers led by specialists from the University of Iowa has obtained evidence of the existence of cold gas streams that participated in the formation of stars in an ancient massive galaxy.

This was reported in The Astrophysical Journal.

Using the complex of radio telescopes of the ALMA observatory, located in the Chilean Atacama Desert, scientists observed a massive galaxy that emerged about 2.5 billion years after the beginning of the expansion of the Universe.

There was so much interstellar dust surrounded by the object under study that it could be seen only in a certain submillimeter range of the electromagnetic spectrum.

Earlier computer simulations have shown that during the first several billion years of our universe, ancient galaxies formed stars from large volumes of cold gas.

Gas entered them in the form of a narrow and ultra-dense flow, similar to a pipe.

The threads of such a "gas pipeline" cut through the hot environment of the galaxy and provided it with continuous flows of raw materials.

The volume of gas required to form a massive galaxy is 100 billion times the mass of our Sun, scientists say.

The galaxy studied by the team has not been previously studied.

To "see" the flow of cold gas in its outer sphere (halo), it took scientists five years, which was spent on setting up the equipment, determining the exact location and distance from the observed object to the Earth.

“This is a prototype, the first time we've found a halo-scale stream feeding a very massive galaxy.

Based on our observations, such streams can fill the reservoir (the outer sphere of the galaxy. -

) in about 1 billion years, "- said Fu Hai, assistant professor of physics and astronomy at the University of Iowa, lead author of the study.

The light from these objects passed through the outer sphere of the galaxy and allowed to determine the chemical composition of the halo.

The analysis showed that a dense stream of cold gas passes through the hot outer sphere of the galaxy.

The low concentration of heavy elements, such as aluminum, carbon, iron and magnesium, indicates that such a flow for the galaxy is incoming, not outgoing, scientists are sure.

This is explained by the fact that such elements are thrown into the halo after the death of the star that produced them.

“Among the 70,000 fast star forming galaxies in our sample, only one is associated with two quasars that are close enough to be able to study the halo gas.

Moreover, both quasars are projected onto the same side of the galaxy ... We are very lucky that nature gave us the opportunity to find this large artery leading to the heart of the phenomenal galaxy during its youth, "concluded Fu Hai.