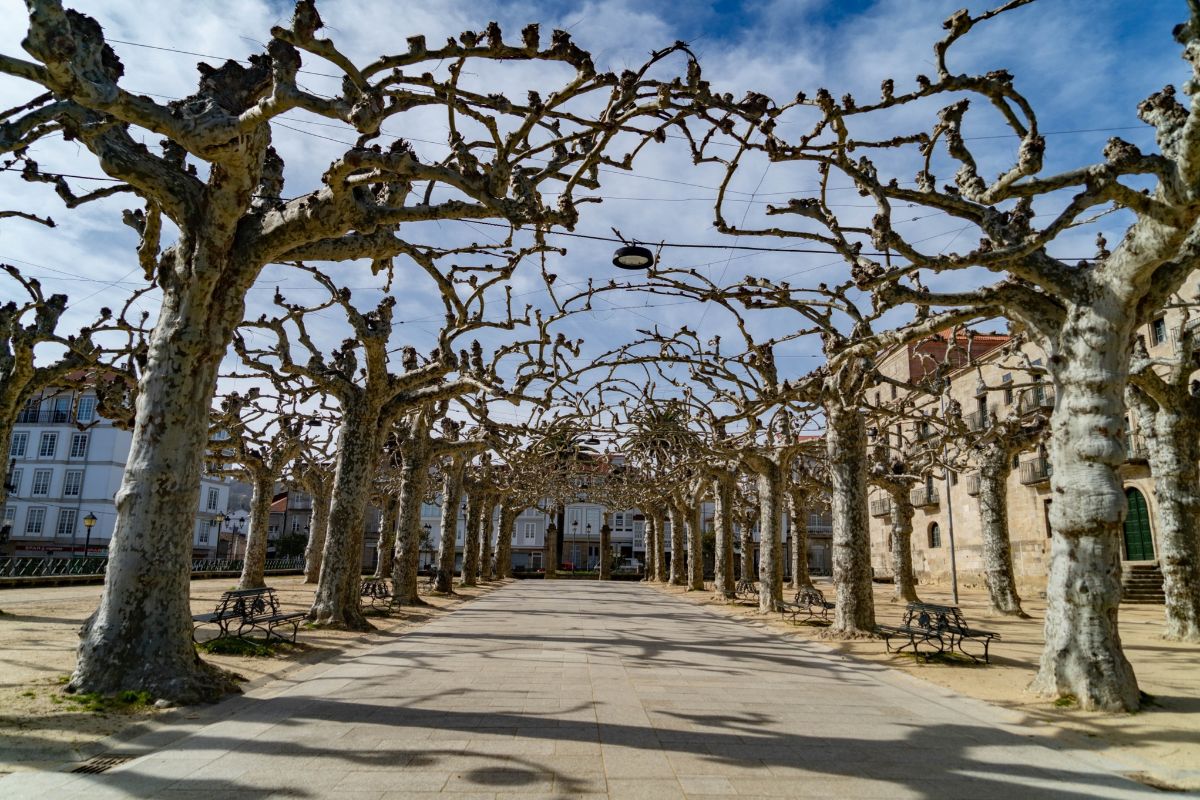 , one of the series of the moment in Spain, which reveals some of the most beautiful corners from Galicia.

Filmed entirely in the provinces of La Coruña and Orense

, Netflix's rural thriller, starring Inma Cuesta and Bárbara Lennie, has managed to captivate viewers by its plot, but also by the beautiful locations in which its eight chapters take place.

More unknown treasures are added to the recognizable facades of the Marina buildings in La Coruña or the breathtaking canyons of the Sil as it passes through the Ribera Sacra, such as the Chelo natural area, Mount Xalo or the Bande hot springs.

The Disorder You Leave Us

This small municipality of about 5,500 inhabitants 30 km from Orense is where the main action of the series takes place, under the fictitious name of Novariz.

The town has several historical enclaves of great importance, such as the most emblematic:

the Monastery of San Salvador

(or San Rosendo), located in the Plaza Mayor.

Founded by this saint in 936 (although remodeled and rebuilt during the 17th and 18th centuries), it includes Pre-Romanesque, Romanesque, Renaissance and Baroque styles and is listed as a National Monument.

Its splendor reached such a degree that it is said that in the 16th century Charles I himself considered the idea of ​​retiring to this monastery, although he finally did so in that of Yuste.

The current church, built on a medieval temple in the seventeenth century, several cloisters, the Mozarabic chapel of San Miguel (it is the jewel of the complex, since it is the only thing that remains standing from the times of the founder) and the library are part of this impressive building with a Baroque façade, with large Corinthian columns, pinnacles and crowned by the bell tower.

Open to the public, its facilities house the City Hall, the tourist office and

One of the cloisters of the Monastery of San Salvador.

It is precisely this monumental institute (the fictional IES Novariz) where the protagonists of the series teach their classes.

The cloister where students spend recess is perfectly recognizable, as well as the wide corridors and stairways inside and the auditorium with stone walls.

The Baths of Bande

Roman Baths of Bande, in Orense.

The Roman Baths of Bande is one of the most recurrent and magical locations in the series, where, despite the cold of winter, the protagonists bathe.

Not as well known as others in the province of Orense, they

about 22 km south of Celanova, in the Las Conchas dam, in the course of the Limia river.

Composed of several swimming pools, bathtubs and a small natural lake, they are accessible when the flow of the Limia falls and hot water with beneficial properties for health gushes out from them.

There are also numerous scenes of the characters walking or running through lush forests.

In this case they are those that populate

the natural area of ​​Chelo, in Coirós, on the outskirts of La Coruña

Located in the valley of A Espenuca, it is bathed by the Mandeo River and is

ideal for hiking and enjoying the surroundings

It has several signposted routes, as well as picnic areas and other beautiful places along the river to go and hang out (in summer there are spots where you can bathe in the river).

We continue south into the interior of La Coruña to reach

this natural viewpoint in the Culledero region

The natural environment, famous for its routes to be done on foot or by bicycle, has interesting megalithic remains (mámoa).

From it you can enjoy incredible panoramic views of the area (like the ones seen in the series when three of the protagonists decide to meet up there).

One of the best places to enjoy the views is O Petón, where you can also practice climbing.

The Avia river as it passes through the town of Ribadavia (Orense).

We return to Orense, specifically to this charming medieval town on the shores of Avia.

Belonging to the Ribeiro region, its first settlers arrived attracted by the gold existing in the river.

The Disorder You Leave Us

Surrounded by a bucolic landscape,

the town is a jewel in itself.

, its old town is an open-air museum.

The Plaza de la Magdalena, within the medieval Jewish quarter, the Plaza Mayor, with the Pazo de los Condes (17th century), a building used today for the Office of Tuismo, and the network of its narrow streets, transport us to the past.

The Sil canyons, in the Ribera Sacra.

The spectacular view of the winding path of the river Sil between gorges of rock for more than 35 km is one of the most breathtaking natural scenes in the series (and also in real life).

Located in the Ribera Sacra, between the provinces of Lugo and Ourense, the Sil canyon is characterized by

Crossing the meanders that the river describes is one of the tourist attractions in the area, a place also known for being a refuge for multiple animal and plant species.

the Marina of La Coruña

Avenida de La Marina, in front of the marina, is one of the most beautiful walks in La Coruña and it also appears in the series.

It is home to

one of the largest groups of glass buildings in the world

, designed by the architect Juan de Ciórraga in the second half of the 19th century, with a model of an arcade that imitates a covered walkway on the seashore.

In these old fishermen's houses, the galleries (some are more than 25 m, others are ornamented with polychrome glass) formed a thermal camera that protected the facade from the rain and, at the same time, captured the heat in winter and cooled the rooms in summer, thanks to its ventilation system.

, presided over by the Consistory building, and the Castillo de San Antón

6 keys to fully enjoy Caminito del Rey after its reopening