"The mystery of the death of the expedition is not fully disclosed": what did the research of Vladimir Rusanov bring to Russia?

The outstanding Russian polar explorer and geologist Vladimir Rusanov was born 145 years ago. According to experts, he made a huge contribution to the exploration of Novaya Zemlya and discovered coal deposits in Spitsbergen, creating the preconditions for securing the right to develop them for Russia. According to historians, Vladimir Rusanov became one of the prototypes of the traveler Ivan Tatarinov - the hero of Veniamin Kaverin's novel "Two Captains" and the adventure film of the same name. 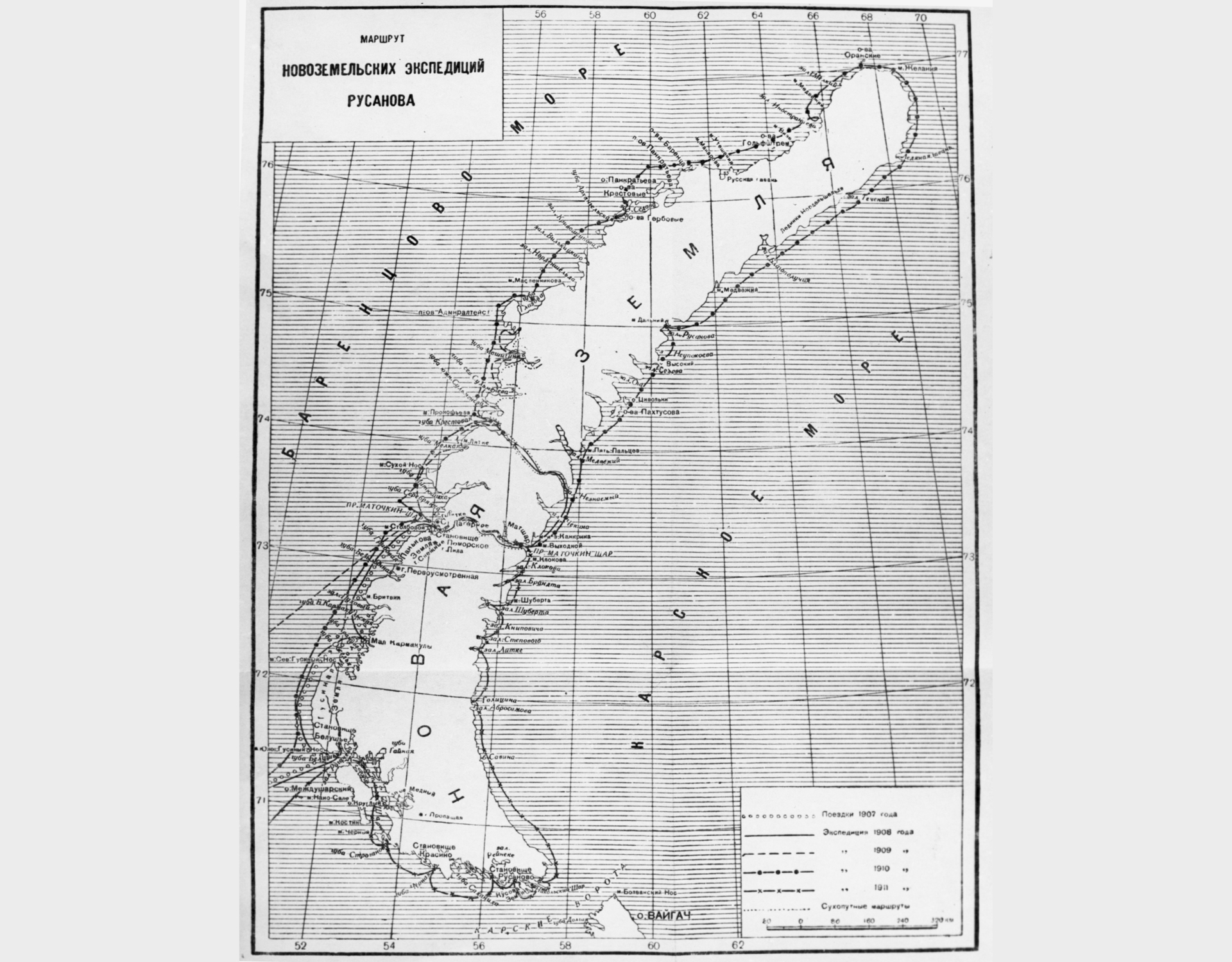 Vladimir Rusanov was born on November 15, 1875 in Orel into a merchant's family.

When Vladimir was still a child, his father fell seriously ill and died a few years later.

The Rusanov family found itself in an extremely difficult financial situation.

From unsuccessful schoolchildren to scientists

Despite the lack of money, his mother was able to arrange Vladimir in the only classical gymnasium in the city.

The boy was smart, but he had a difficult character and at first did not meet the expectations of his relatives - he was expelled from the gymnasium for poor progress.

Walking, studying wildlife and reading books attracted Vladimir Rusanov much more than studying according to a traditional program.

He was not interested in the real school, from which he also soon left.

The first educational institution that Rusanov was able to graduate was a theological seminary.

One of her teachers was Vladimir's stepfather.

Despite the difficulties with the study of some of the subjects, in 1897 Rusanov graduated from the seminary.

However, new troubles soon awaited him.

As a teenager, the future researcher became interested in Marxist ideas, and then joined the illegal organization Workers' Union.

After graduating from the seminary, Vladimir got a job as a free student at the natural faculty of Kiev University, but less than a year later he was arrested on suspicion of "state crimes" and spent some time in prison.

In 1901, after another arrest, Rusanov, who by this time had managed to get married, was sent into a two-year exile in the Vologda province.

Here in his life there was a radical change.

Vladimir, on behalf of local authorities, undertook to conduct statistical research in the Ust-Sysolsk district.

In addition to fulfilling his direct official duties, he contrived to conduct scientific observations.

Due to problems with law enforcement agencies, Rusanov could not get a higher education at home.

Vladimir went to France and began studying natural sciences at the Sorbonne.

Over time, he specialized in geology.

He himself, despite difficult experiences, continued his studies.

In 1907, he made a trip to the then poorly explored Novaya Zemlya archipelago.

Rusanov carried out a detailed exploration of the coast and revealed the fact of retreat of glaciers in the archipelago.

The following year, he traveled to Paris and again went north as a geologist for the French Arctic expedition.

In 1909, he was included in the Russian expedition that went to Novaya Zemlya from Arkhangelsk.

Rusanov made a number of important geological discoveries, discovered minerals on the archipelago, and explored areas of Novaya Zemlya previously unknown to science.

In 1910, the Arkhangelsk authorities officially appointed Vladimir Rusanov as the head of an independent expedition called to survey the northern part of Novaya Zemlya.

The discoveries of scientists have expanded the understanding of mankind about the Novaya Zemlya archipelago and the hydrological features of the waters surrounding it.

In addition, Rusanov reported to the authorities about the unauthorized activities of Norwegian industrialists on Novaya Zemlya, who were later expelled from the territory of the Russian archipelago.

In 1911 Rusanov on the yacht "Polyarnaya" surveyed the southern part of Novaya Zemlya.

In the same year, he informed his family about his engagement to Frenchwoman Juliette Jean.

The disappearance of the expedition

At the beginning of 1912, Vladimir Rusanov accepted an offer to appoint him as the head of the expedition to Svalbard.

However, it soon became clear that Rusanov's plans were not limited to this.

Contemporaries recalled that the scientist directly declared his intention to visit not only Svalbard, but also some other "interesting places".

For the expedition Rusanov picked up the ship "Hercules", which had excellent seaworthiness.

He supplied the expedition with food supplies for a year and a half.

In addition to Russian scientists and sailors, Rusanov's bride, Juliette Jean, took part in the expedition as a physician and geologist.

In July 1912, the Hercules left Aleksandrovsk-on-Murman (the modern city of Polyarny) and soon reached the shores of Spitsbergen.

Rusanov hiked the island of West Spitsbergen, during which he fell into an ice crack and almost died.

Nevertheless, during the campaign, he discovered rich coal deposits on the archipelago.

“It is Rusanov who is responsible for the pioneering work on the discovery of coal deposits in Spitsbergen.

Moreover, he even staked out some plots there, which later formed the basis of our concessions for coal mining, "Russian honorary polar explorer Viktor Boyarsky said in an interview with RT.

Over the summer, the expedition, in addition to geological, managed to carry out paleontological, botanical, zoological and oceanographic research on the archipelago.

Having sent a few people home, Rusanov with the rest of the expedition headed east.

Having reached Novaya Zemlya, he left a message in which he announced that he planned to reach the northwestern part of the archipelago, and then follow the eastern course further.

“Rusanov intended to make the transition along the Northern Sea Route, but, unfortunately, he did not cope with this task and disappeared,” said Viktor Boyarsky.

In 1913, news from the Rusanov expedition, as well as from the expeditions of Georgy Brusilov and Georgy Sedov that went simultaneously with it to the Arctic, ceased to arrive in St. Petersburg.

Only in 1934, on a small island off the coast of Taimyr (later called Hercules), a post was discovered with the inscription “Hercules.

In the same year, on the island in the skerries of Minin, some personal belongings and documents of the members of the Rusanov expedition were found.

A little later, there were other finds, in particular, a fragment of a manuscript by Vladimir Rusanov himself.

In the 1970s, on the same islands, an expedition of the Komsomolskaya Pravda newspaper discovered a hook, sledges, cartridges, buttons and other items that supposedly belonged to Rusanov's people.

It also became known that in the 1920s, rescuers looking for Norwegian sailors found the remains of a large fire, coins, bones and cartridges in the area of ​​the alleged death of Rusanov's expedition.

In addition, in the 1950s - 1970s, reindeer herders living in the Taimyr region said that they had found and buried some dead people back in tsarist times.

In 2000, remains were discovered on Taimyr that allegedly belonged to the captain of the Hercules, Alexander Kuchin.

“The secret of the expedition has not been fully disclosed.

Individual finds related to the activities of Rusanov and his people cannot explain what actually happened, "said Konstantin Strelbitsky, chairman of the Moscow Fleet History Club, in a conversation with RT.

Various geographical objects and ships were named after Rusanov.

In addition, it is believed that he became one of the prototypes of the traveler Ivan Tatarinov - the hero of the novel “Two Captains” by Veniamin Kaverin and the adventure film of the same name.

“The image of Tatarinov combines the images of Brusilov, Rusanov and Sedov.

In Tatarinov, for example, we see the character of Rusanov, his personal characteristics.

After all, Rusanov was both a traveler and a scientist, ”stressed Viktor Boyarsky.

According to Konstantin Strelbitsky, Rusanov is one of those who symbolize Russia's exploration of the Arctic.

“Rusanov literally walked around the entire Novaya Zemlya with his feet.

This was not an armchair scientist, but a researcher with a capital letter, an ascetic researcher.

His geological and geographical discoveries were made once and for all, filling in the blank spots on the world map, so they will always be relevant, ”summed up Strelbitsky.