The envelope left behind by a man with a hard hat on... Hand letter story

[Ko Hyun-jun's News] This is the news of Ko Hyun-jun, a current affair critic who picks and delivers the news. What's the first news on Friday? &lt;Ko Hyeon-jun/Sisa Critic&gt; A party who filmed a video bathing in a liquid presumed to be milk at a suspected dairy factory in Turkey was arrested. 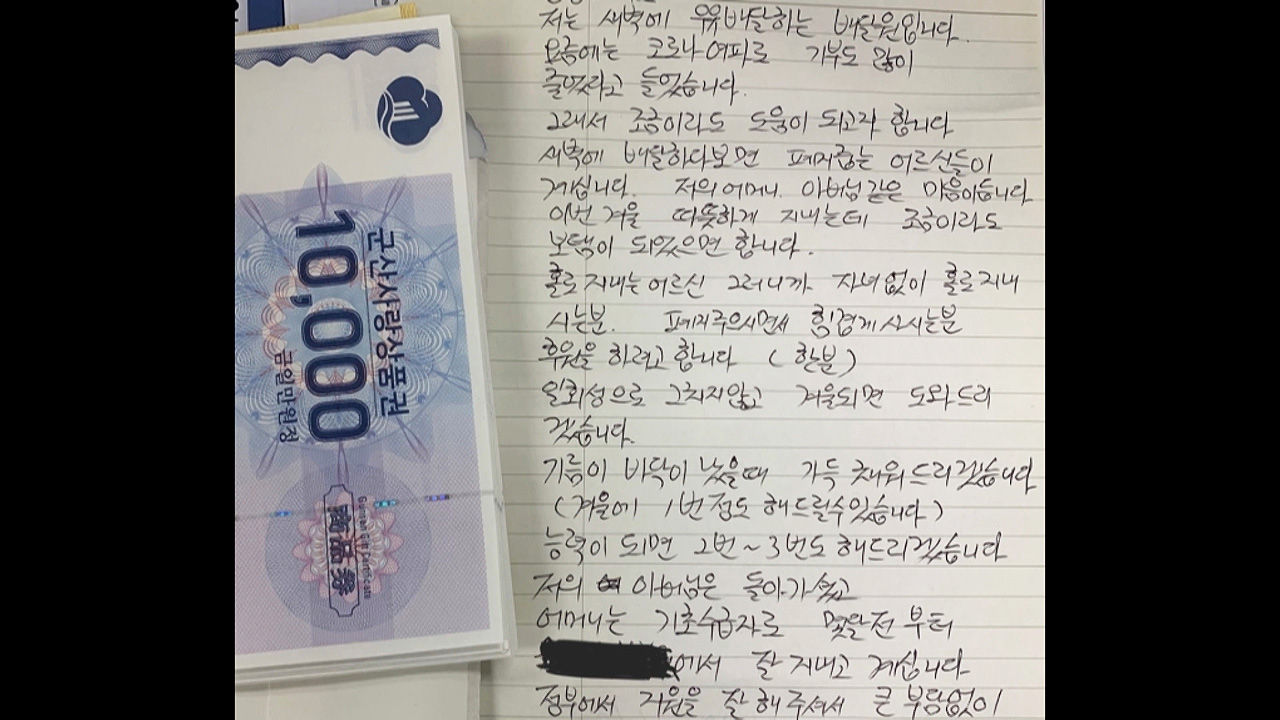 is the news just about current affairs critic Koh Hyun-jun, who picks and delivers the news.

What's the first news on Friday?

A party who filmed a video bathing in a liquid presumed to be milk at a suspected dairy factory in Turkey was arrested.

A man is soaking in a whitish liquid, and a liquid supposedly milk is poured into a cup and sprinkled on the body.

It is a dairy factory in Turkey that is taking a bath.

When the video became controversial, the local police investigated and confirmed that it was shot at a dairy factory in Anatolia in central Turkey, and revealed that both the person in the video and the person who filmed it were factory employees.

The two are known to have done this to get attention on social media, but they were eventually arrested by the police and fired from the factory.

However, the two explained that they were not bathing in milk, but rather a mixture of water and detergent, and local authorities closed the dairy factory where the footage was filmed and fined them.

In addition, it is known that the products produced in this factory were recovered for safety concerns.

are actually things to hit and things not to hit, but it seems like my judgment was blurred a lot because I wanted to get too much attention.

It's a nursery rhyme that has become very popular all over the world.

'Baby Shark' has been certified as a diamond by the Music Industry Association of America.

Baby Shark sold more than 1.2 million copies in September by the Record Industry Association of the UK and received double platinum certification, and it is said to be the second Korean content since Psy's Gangnam Style in 2013.

Baby sharks are popular all over the world for their addictive chorus and easy-to-follow rhythms.In particular, the'Baby Shark Dance Video', in which two children sing a baby shark in English and dance, received 7 billion views on YouTube on the 2nd. While recording, he became the most watched video on YouTube.

It seems that I watched that video more than 100 times with my children.

Please give us the next news.

A man delivering milk conveys his warmth by donating money to ask for use for the elderly who pick up waste paper.

On the 10th, a man wearing a hat deeply came to the Welfare Policy Division of Gunsan City and presented an envelope.

He introduced himself as a milk deliveryman through a handwritten letter, and recently heard that the donation has decreased a lot due to Corona 19.

In particular, when I deliver milk at dawn, I see a lot of elderly people picking up waste paper, and every time I feel like my parents, she added, “I hope that it will help the elderly to stay warm this winter.

He also expressed his intention to continue to donate in the future, but he did not reveal his exact identity, saying that he was not trying to attract attention.

This donation will be delivered to the elderly who pick up waste paper in Gunsan according to the will of the man.