Anti-gravity can make a boat float "upside down"

Discover, every day, an analysis of our partner The Conversation. Today, two physics researchers explain to us how we can get a liquid to be "drawn upwards" 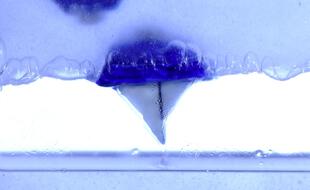 Small boats floating on and under a layer of levitating liquid -

On Earth, everything is subject to gravity: objects fall and rivers flow from heights towards the sea. The consequences of an absence of gravity are now well known through the images of astronauts floating in their cabin .

But can you make an anti-gravity device?

Objects would then "fall" upwards, the oceans would levitate, and boats would be seen floating upside down on these inverted oceans.

This anti-gravity is present in several fantasy worlds, such as

Pirates of the Caribbean 3

where a sea above the clouds is explored. by adventurers.

Small boats, about 3 cm in length, floating above and below a layer of levitating liquid.

A pendulum upside down

A surprising experiment was made at the beginning of the twentieth century.

She uses a pendulum, similar to that of Professor Calculus, composed of a rigid rod with a mass at its end.

When the pendulum is inverted with the mass vertically upwards, the slightest disturbance is expected to cause it to fall back.

This experiment can be done at home with a simple loudspeaker or a jigsaw to shake the pendulum.

A chain of pendulums attached to each other can also be stabilized upside down.

By vibrating sufficiently strong, it would even be theoretically possible to keep a rope rising in the air like a magic trick… but without rigging!

The accelerations required for such an experiment are nevertheless difficult to achieve in practice.

The explanation for this phenomenon was given by the Nobel Prize winner for physics Pyotr Kapitza in the 1950s. It is a dynamic effect: the vibrations act on the mass of the pendulum like a stabilizing force to maintain balance.

Our daily experience shows us that a liquid does not stay "upside down" either: when water vapor condenses on a pan lid or when we try to paint a ceiling, hanging drops form. and eventually fall.

Create one layer of levitating liquid (silicone oil), then two, in vibrating vessels.

But by making the ceiling vibrate vertically, we observe however that these hanging drops re-enter the liquid layer which becomes flat again as if gravity were reversed.

In fact, it is the same phenomenon as for the pendulum.

The vibrations of the hanging drops induce an upward force that opposes their weight.

For sufficient vibration, the entire liquid layer remains stable on the ceiling.

What would be the behavior of an object placed in a liquid thus attracted upwards?

When an object is immersed in a liquid, its behavior depends on its density: an object less dense than the liquid will rise to the surface while a more dense object will naturally sink.

This is for example why an air bubble (whose density is very low compared to that of water at atmospheric pressure) produced at the bottom of a water tank rises to the surface.

However, during the early days of the space conquest, a strange phenomenon was observed.

The gas bubbles present in rocket fuel flowed instead of rising to the surface under the effect of vibrations during their flight.

This strange phenomenon which could have dramatic consequences due to the presence of gas in the fuel has been the subject of extensive studies which revealed that the oscillations of the bubbles induced by the vibrations of the rocket resulted in a force directed towards the low, opposing Archimedes' thrust.

Control of the height of an air bubble in a vertically vibrated liquid (silicone oil), changing the excitement of the bath.

This experiment can be reproduced simply with a container containing a liquid which one would vibrate.

By making bubbles in the liquid using a syringe, it is possible to control the movement of the bubbles by adjusting the excitement of the bath.

By injecting more air, it is even possible to completely fill the bottom of the container.

In this case, the liquid is like levitating on a cushion of air.

This seems paradoxical, but like the pendulum or the liquid on the ceiling, the vibrations, again, stabilize the liquid and prevent it from deforming.

Unable to let air escape, it then remains in suspension.

The larger the layer of liquid, the more energetically you have to vibrate.

We are still far from an ocean, but the experience is enough to create a miniature world in which to have fun!

a world upside down

Now that the scenery is in place, what would life be like in such a universe?

Could we for example swim or float below such an ocean?

The answer is far from obvious… but it turns out that you can float under this ocean exactly the same way as above!

There is absolutely no difference between being above or below liquid for flotation.

The responsible for this "anti-gravity" is the same as before, namely the vibration.

This therefore stabilizes on a surface that should not exist floats that have nothing to do there.

The original effects of vibrations on liquids still remain largely to be explored with many potential applications.

The vibrations make it possible to provide energy to liquids in a differentiated, localized manner and without direct contact.

In the future, this could allow balances to be changed for desalination, for example, or even to separate mixtures of liquids as well as elements dispersed in liquids for applications such as wastewater treatment and oil spill remediation.

But, it is also and above all an invitation to the imagination where boats cross without seeing each other or to dream with a sky filled with sailboats.

Enough to make Archimedes turn in his bath… or rather enough to turn the entire bathtub!