In December 2016, the HOFF (Hall of Fame) sneaker brand was born. It was a modest project a priori, with two young entrepreneurs, Miguel Botella and Fran Marchena, behind and behind. 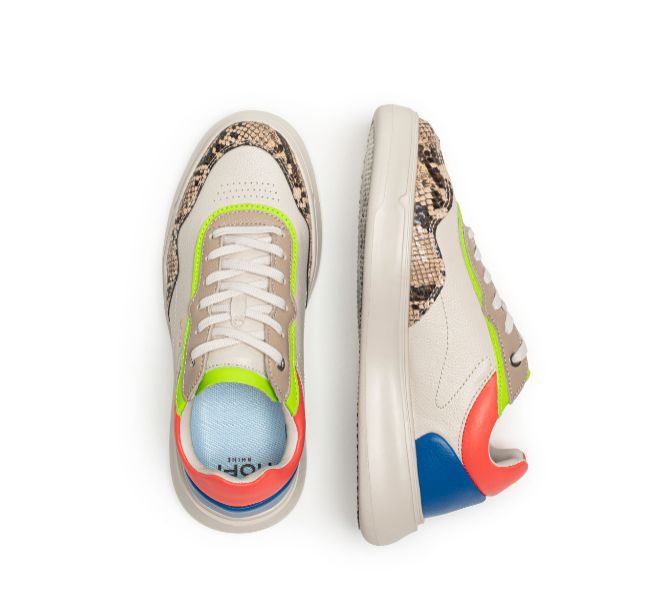 The Rhine model from the River collection.

The HOFF brand has just opened its first store in Madrid

Its transparent and silk-screened soles are its hallmark

In the spring / summer campaign they sold more than 60,000 pairs

In December 2016, the HOFF (Hall of Fame) sneaker brand was born.

It was a modest project a priori, with two young entrepreneurs, Miguel Botella and Fran Marchena, behind it and three clear signs of identity:

that allowed many people to show off their models.

Sara Carbonero appeared on Instagram with one of her models.

They couldn't have a better cover letter or more effective promotion

And without investing a euro.

In principle, they focused on the female audience, but a year and a half ago they had to listen to the requests of the male sector and expanded the 'family'.

A few weeks ago, the Elche brand opened its first store in the Salamanca district of Madrid (Velázquez, 39) after months of looking for a place that met its expectations.

A store that aims to be

With a design of clean lines and simple geometries and materials such as marble, stone and lacquered metal, the space helps to show the essence of the brand, which has sold

"In the spring-summer campaign - with home confinement in between - we sold 60,000 pairs."

From the beginning they were clear about the objectives.

Our intention has always been to internationalize the brand

The one in Madrid is the first store to open, but they already have 400 points of sale.

They have 'sneaked in' at Printemps in Paris, at Anthropologie in London and shortly at Revolt in the US.

"We are in more than 10 different countries, with the ambition to be in many more very soon."

In a market as competitive as that of sneakers, they have managed to position themselves with their own style.

The sole of its models is its hallmark from the beginning:

transparent and with a handmade silk-screen print one by one

is the second characteristic of the brand;

a city, an island, a neighborhood, a museum ... The world has never looked so good on its feet.

His new collection takes us to New York and Vancouver, but not only.

offers six models with more minimalist lines and with rivers as the protagonists.

Art lovers have their line in the

, where the Louvre, the Guggenheim or the Moma take their sought-after soles.

The collection that they have launched with the Spanish designer Moisés Nieto, who has designed a model for HOFF, has been a success and there are hardly any models available.

In December they will have the launch of a new capsule collection,

, for whose campaign, made in New York, they have had the model Rocío Crusset.

The idea since its inception has been to create two collections a year, spring / summer and autumn / winter, "wrapped in capsule editions", they say in HOFF.

But the Alicante brand lives not only by design, which has captivated a multitude of well-known faces.

Philanthropy is at the core of HOFF

, which often helps in various causes, be it with a project in Malawi that has brought clean water to a community of more than 100 people this year;

raising money to research a vaccine for the coronavirus -they raised more than 8,000 euros- or giving away their sneakers to volunteer medical students at the La Paz hospital in Madrid.

They have not turned four years old and success has already knocked on their door.

There are already 30 people who make up the HOFF staff, which last year had a turnover of 2.8 million and

this year it expects to reach 5 million

Guggenheim model from the Art collection