"I am concerned that there is a risk of civil unrest across the country, as our nation is so divided and election results will potentially take days or weeks to be completed. 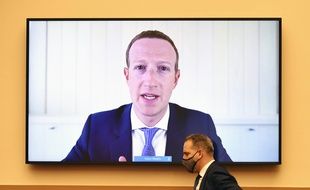 The boss of Facebook fears the worst in the days to come.

Mark Zuckerberg is worried about potential violence in the wake of the American elections, he said with the approach of a poll under high political tension, in the form of a test for the social network.

"I am worried that there is a risk of civil unrest across the country, as our nation is so divided and the election results will potentially take days or weeks to be finalized," he said on Thursday. at a conference on his company's quarterly results.

With the pandemic, and the mobilization of voters for or against the controversial Donald Trump, postal voting is exploding, raising fears that the count will take longer than usual.

"Next week is going to be a test for Facebook"

Mark Zuckerberg recalled some of the safeguards put in place, such as the ban on all advertising on social or political subjects, on its platforms in the United States, at the closure of polling stations, to reduce risks of “confusion or abuse” for as long as it takes.

“Next week is going to be a test for Facebook,” he admitted, keen to prove that his company really learned the lessons of 2016, when massive disinformation campaigns, some of them piloted from Russia, had used the networks to disseminate their propaganda on a large scale and in a targeted manner.

This week, the ban on new political ads during the last seven days of the campaign was marked by boondoggles.

Facebook has notably been accused of passing up ads from Trump's campaign targeting key US states, claiming election day was last Tuesday.