With more than a month behind the usual schedule, Apple presented this Tuesday, October 13, its new iPhone 12 as well as a new HomePod Mini speaker. 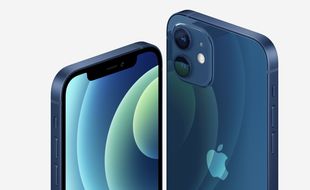 “The next generation is here”

And they will be 5G.

While most manufacturers have been advancing their 5G smartphones for months, Apple is therefore falling into line.

The new iPhone 12 retain their black notch on the front.

Eleven percent thinner, 15% smaller and 16% lighter than its predecessors: the new iPhone 12 has a 6.1 '' Super Retina XDR OLED display.

This screen is based on a new glass named

According to Apple, it would be four times more resistant with it, according to the manufacturer.

With, in the event of a fall, “four times more likely to survive without breaking down”.

Tim Cook during the presentation of the new iPhone 12. - CAPTURE

The terminal is powered by the new 50% faster A14 Bionic processor.

The graphic possibilities would be the highest in the vast world of smartphones, according to the Californian manufacturer.

will therefore be at the party, with increased responsiveness and extra detail in images.

and off you go!

Apple takes the opportunity to introduce

, a magnetic technology that allows faster recharges of the iPhone 12.

The opportunity for the apple brand to sell new accessories ...

Note that the iPhone 12 uses the visual codes of the iPhone… 4 with their metallic outline.

They are also reminiscent of the last iPad Pro.

Their screen always incorporates a large black notch to hide the front sensors ... which is a shame when many other manufacturers have managed to get rid of them!

The iPhone 12 (on sale October 23) is also available in a mini version with a 5.4 '' screen which has the same technical characteristics and available on November 13 in stores.

Two pros for photo and video

For its part, the new iPhone 12 Pro is a luxury product, with four metallic finishes.

The three rear sensors of the iPhone 12 Pro.

A photo mode called "iPhone Pro RAW" should allow photographers to get closer to a professional rendering.

The iPhone 12 Pro can record video in Dolby Vision HDR up to 4K at 60 frames per second.

This is a first.

It can therefore withstand immersion up to 6 meters for 30 minutes.

In view of these announcements, Apple hardly surprises with its classic iPhone 12. The photo and video possibilities of the iPhone 12 Pro should allow us to judge whether the Apple brand can play a step ahead here…

Apple sues recycling company that allegedly sold more than 100,000 of its devices

A HomePod Mini speaker at 99 euros

The device arrives more than two years after the HomePod speaker, the brand's first apple.

In the shape of a ball available in black or white, the HomePod mini incorporates four speakers, two of which are on the sides to reproduce 360 ​​° sound.

The top of the speaker lights up when you ask Siri, the Apple Assistant.

We can thus receive a message on his Apple Watch and ask the HomePod mini to respond to it, without further manipulation.

The HomePod mini will be launched at 99 euros.