The Meteorological Administration predicts that typhoon'Babi' will bring a strong wind equivalent to typhoons'Rusa' and'Maemi', which have caused great damage to Korea. According to the Jeju Regional Meteorological Administration, Typhoon Barbie is a medium-form wind of the'River' with a central air pressure of 960 hectopascals and a maximum wind speed of 39m per second near the center. . 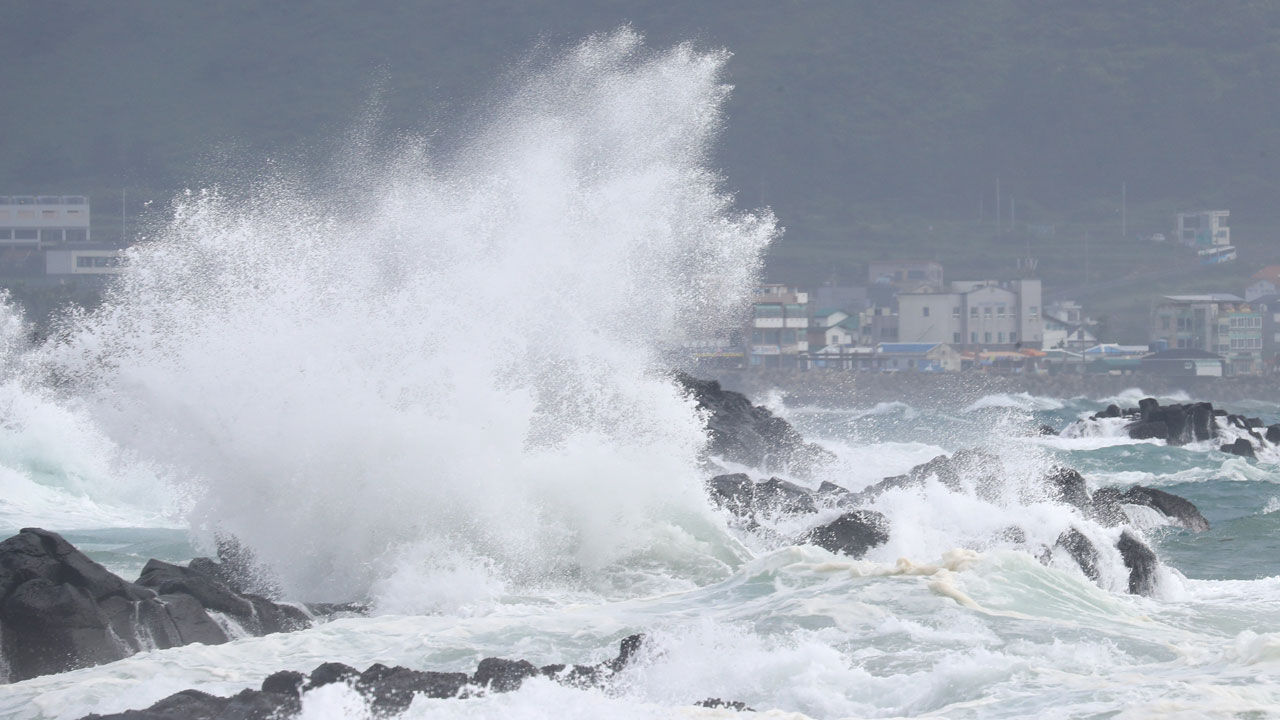 ▲ A strong wave hit the coast of Seogwipo on the morning of the 25th, when typhoon'Babi' is going north

As'Babi', the largest and most powerful typhoon this year, is gradually approaching the Korean peninsula, attention is being paid to the power of the typhoon.

The Meteorological Administration predicts that typhoon'Babi' will bring a strong wind equivalent to typhoons'Rusa' and'Maemi', which have caused great damage to Korea.

According to the Jeju Regional Meteorological Administration, Typhoon Barbie is a medium form wind of the'River' with a central pressure of 960 hectopascals (hPa) and a maximum wind speed of 39m per second near the center at 9 am on the 25th. It is traveling north-northwest at a speed of 16 km.

The Meteorological Administration predicts that Typhoon Bobby will remain in a'very river' state until 9 pm tomorrow, with a central pressure of 945 hectopascals (hPa) and a maximum wind speed of 45 meters per second near the center. There is.

According to the Meteorological Administration, Typhoon Barbie passes through Jeju and Jeonnam in a state of'very river' with a maximum wind speed of 47m per second near the center.

If the wind blows at 15m/sec, the sign on the building may fall off, and at 25m/sec, the roof or roof tiles are torn off.

Standing in the center of a typhoon is like being hit by the same wind as when you stick your face out of the window in a car running at 169 km/h.

There has been no case of a typhoon, the'very river' of the robber, landing on the Korean Peninsula in the 2000s.

In the case of typhoon'Maemi' in 2003, it landed on the Korean Peninsula while maintaining the strength of the'River' with a central pressure of 954 hPa and a maximum wind speed of 41 m/sec near the center.

The cicada had the strongest wind among the typhoons invading the Korean Peninsula since the 2000s.

At that time, the maximum wind speed of 60m per second was observed in Jeju.

It is a tremendous strong wind that reaches 216 km per hour.

As the typhoon cicada swept through Jeju with a strong wind, two people were killed, and property damage of KRW 48.75 billion, which is the fourth largest ever, occurred.

The typhoon'Bolaben', which came in 2012, was also in a'river' state with a central pressure of 954 hPa and a maximum wind speed of 38 m/sec near the center at the time of landing.

The power of typhoon'Bobby' can also be estimated from the path and radius of strong winds.

The Meteorological Administration announced that Typhoon Barbie will pass through the western coast of Jeju Island and near Gageo Island and Heuksan Island.

When Typhoon Barbie travels north along the West Sea, Korea will be placed in the danger class on the right side of the typhoon.

Typhoons have the characteristic of turning counterclockwise, so if the Korean Peninsula is located to the right of a typhoon, it will be strongly affected by the wind.

In particular, Typhoon Barbie is expected to maintain a'very river' intensity as it passes through the western and western seas of Jeju Island, and is expected to be a'medium' scale with a strong wind radius of 400 km or more.

Typhoons, which resemble the trajectory of Typhoon Barbie, are named'Bolaben' in 2012 and'Lingling' last year.

Volaben and Lingling advanced to the west sea after passing the western sea of ​​Jeju Island during the dawn time.

During the invasion of Volaben, two Chinese ships anchored in front of Hwasun Port in Seogwipo City were aground, killing 15 out of 33 sailors.

In Seogwipo Port, damage to facilities amounted to KRW 22.8 billion due to the loss of the breakwater tetrapod (TTP) due to the strong waves.

According to Jeju Island, in 2012, two typhoons, including Volaben and Denbin, hit Jeju one after another, causing property damage of 57.2 billion won.

During the Ringling invasion, the moving walk for a 95m cruise tourist in the Jeju Civil Military Complex Tourist Port in Gangjeong-dong, Seogwipo-si, was flooded, and the safety railing at the East Breakwater of Hwasun Port, Andeok-myeon, Seogwipo-si, was damaged.

In addition, the roof of the multipurpose auditorium in Deoksu-cho, Andeok-myeon, Seogwipo-si, collapsed due to a strong wind.

The Meteorological Administration said, "Typhoon Barbie has similar travel paths with Ringling and Bolaven, but it is predicted that the intensity will be stronger by looking at the maximum wind speed near the center." In addition, unlike Ringling and Volaben, it is expected that it will be close to Jeju in the afternoon. 26th) You should refrain from going out and be careful to avoid typhoon damage.”