Good news for Al-Ahly youth, caused by the “Winter Champion”

Shabab Al-Ahly regained the top spot in the ADNOC Professional League standings and won the title of "Winter Champion" after the end of the 13th round matches, which witnessed great excitement and unexpected results that contributed to the increase in the strength of the competition for the title, in addition to the difficulty of the task of clubs seeking to move away from the specter of relegation to Dr. 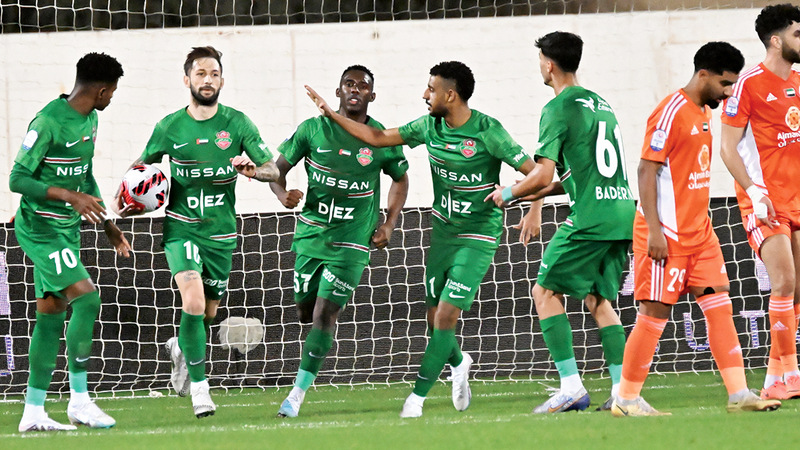 Good news for Al-Ahly youth, caused by the “Winter Champion”

Shabab Al-Ahly regained the top spot in the ADNOC Professional League standings and won the title of "Winter Champion" after the end of the 13th round matches, which witnessed great excitement and unexpected results that contributed to the strong competition for the title, in addition to the difficulty of the task of clubs seeking to move away from the specter of relegation to the first division. .

And "Dubai Knights" won the title of Winter Champion for the fourth time since the application of professionalism in the 2008-2009 season. 2020 "Dubai Knights" topped the rankings and was on its way to winning the title, but the competition was not completed six rounds before its end due to the repercussions of the new "Corona" virus pandemic.

Shabab Al-Ahly achieved a victory outside its stadium against Ajman, with three goals to one, to raise its score to 28 points, and regain the lead that it lost in the last round in favor of Sharjah, while the balance of the "orange" stopped at 23 points in fifth place.

The "Dubai Knights" took advantage of the stumbling of the former leader, Sharjah, who tied with the "renewed" victory with the new deals, with a goal for each team, to raise the "king" to 27 points and fall back to second place, while the "general" continued in the 12th place, with his score reaching eight points, and the crisis continues. "Blue" is in the ranking table by achieving one victory in the first leg.

The return stage became hot, after Al-Wahda returned to the atmosphere of competition by achieving a victory in the fatal time over Bani Yas with a goal without a response, to raise “Al-Annabi” its score to 26 points in third place, while “Al-Samawi” stopped its score at 15 points in ninth place.

Al-Wasl maintained its chances of competing for the title by defeating Khorfakkan with three goals without a response, raising the "Emperor" to 25 points in fourth place, while "Al-Nusour" frozen its score at 15 points in tenth place.

For his part, Al-Jazira received a strong shock by losing to Ittihad Kalba with two goals to one, so that "Abu Dhabi Pride" took a step away from the competition by stopping its score at 23 points in sixth place, while the "Tigers" raised its score to 20 points in eighth place.

Al-Ain achieved a difficult victory over Al-Bataeh, with three goals to two, to raise “Al-Zaeem” to 22 points in seventh place, while “Al-Raqi”, whose balance stopped at 13 points in 11th place, on the other hand, Al Dhafra left the last place by defeating Dibba Al-Fujairah with two goals to one. , to raise its tally to seven points in the 13th place, and "Al-Nawakhda" fell to the 14th place with four points.

«Emirates Today» conducted a survey through its account on the social networking site «Twitter», in which it asked about the clubs that need new contracts during the winter transfer period to continue competing for the ADNOC Professional League title and to pursue the leaders and runners-up, Shabab Al-Ahly and Sharjah, and four answers were monitored, which are Al Wasl clubs. And the unit and the island and the eye.

During the poll that 2041 participants interacted with, 45.5% confirmed that Al Ain most needs to sign new deals in order to compete for the title, while Al Wasl came in second place with 20.5%, Al Jazira third with 18.2%, and Al Wahda fourth with 15.9%.

For his part, technical analyst Khaled Obaid confirmed that the results of the 13th round did not witness any surprises, pointing out that Al-Jazira's loss against Ittihad Kalba and Sharjah's draw with Al-Nasr were not surprising.

Obaid told "Emirates Today" that Al-Ahly youth deserved to return to the top of the standings, pointing out that the "Dubai Knights" played their match against Ajman with great passion and desire to win, praising the performance of the "Orange" who played the entire match with 10 players after the expulsion of Muhammad Ismail after 25 seconds have passed since the start of the match.

He pointed out that the Kalba Union's victory over Al Jazira is not a surprise, stressing that the "Tigers" have been presenting impressive levels since the beginning of the season, in addition to that "Abu Dhabi Pride" has declined in the past period.

On the other hand, he stressed that the "renewed" victory achieved an expected result against Sharjah, according to the contracts concluded by the "Brigadier", indicating that the "King" played a difficult match and the result of the draw is logical.

As for the "Emirates Today" survey, Khaled Obaid confirmed that Al-Ahly and Sharjah youth are currently the most prominent in the competition for the title, while he indicated that contracts during the winter transfer period are witnessing great difficulty in assigning influential players, and he said: "I see that the unit is the most successful in his contract." With the Brazilian Pereira coming from Al Hilal of Saudi Arabia, while I exclude both Al Jazira and Al Wasl from competing for the title because they do not follow a consistent pattern and there is fluctuation in the levels of the players.

He concluded his remarks by saying: "Al-Ain achieves victory, but without persuasion or strong performance, and if he succeeds in strengthening its ranks before closing the registration door, in addition to improving the level of the team, he can return to the competition for the title."

To see the top scorers, the teams' standings, and the results of round 13,