16 yellow cards and controversial decisions... Did the referee spoil the Argentina-Netherlands summit in the Qatar World Cup quarter-finals?

In the stands of the fans of Argentina and the Netherlands, the journalists' booth and the mixed area, there is no talk except about the Spanish referee, Mateo Lahoz, and his method of managing the "Tango" and "Mills" summit in the quarter-finals of the World Cup in Qatar. 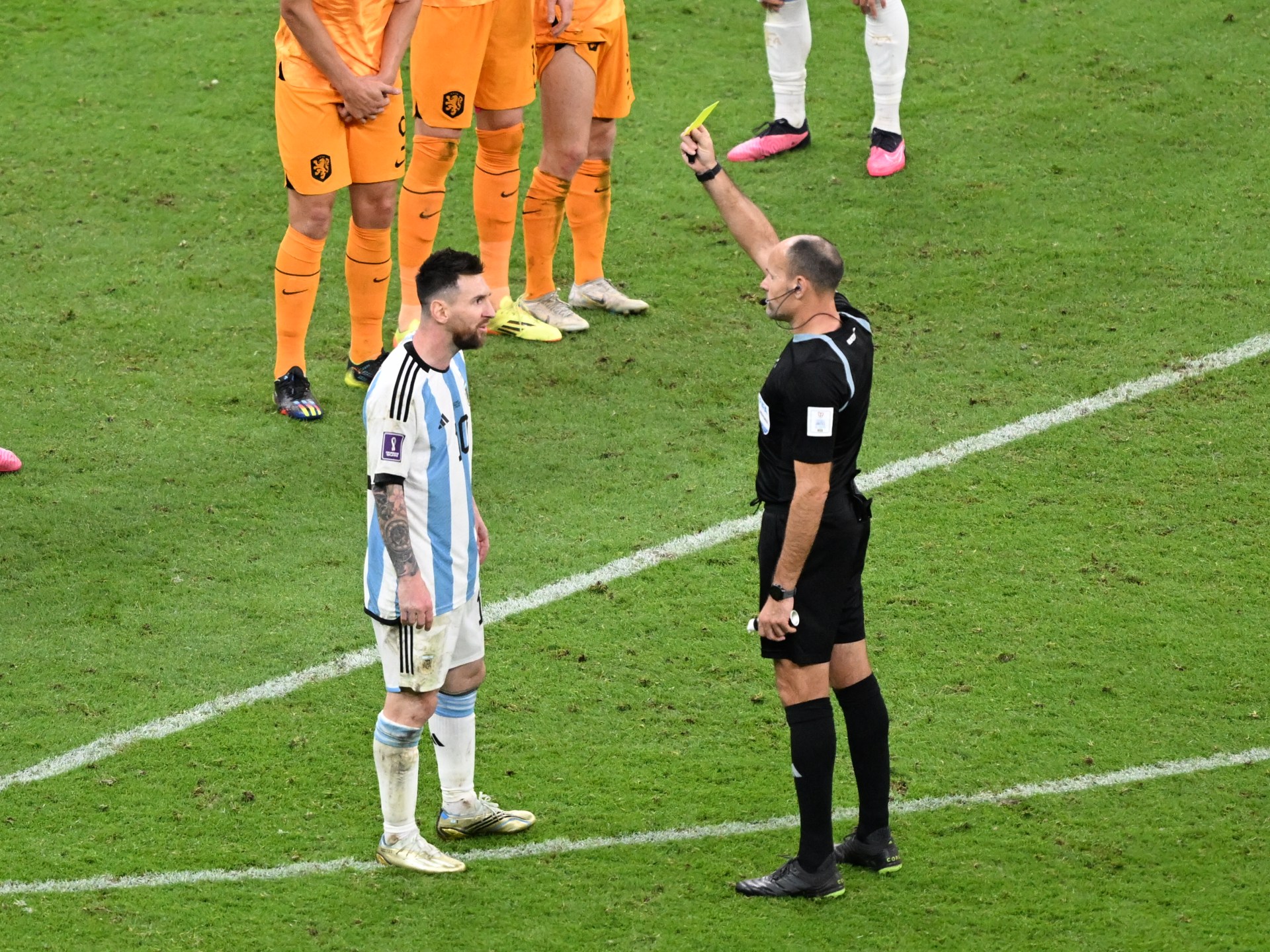 In the stands of the fans of Argentina and the Netherlands, the journalists' booth and the mixed area, there is no talk except about the Spanish referee Matteo Lahoz and the way he managed the "Tango" and "Mills" summit in the quarter-finals of the World Cup in Qatar, which ended with the victory of Lionel Messi's comrades in a penalty shootout 4-3.

Although the man of the match was Messi by scoring a goal and making another, and his success in translating the first penalty shootout that opened the door to Argentina's victory, and the Argentine goalkeeper Emiliano Martinez was the hero of the match by saving two penalties, Lahoz was the undisputed star of the match.

All this scenario provoked the captain of the Argentine national team, who received his share of yellow cards, and said that "FIFA should not appoint such referees (Lahoz) to manage this level of matches," and accused Lahoz of being "clearly prejudiced against our national team players." ".

Messi criticizes Lahoz and talks about confidence in penalty kicks

And when the "Bulga" came to the mixed zone, we tried to ask him a direct question whether he felt that the referee Lahoz "has something personal about him, given that he led dozens of matches for him when he was a player in Barcelona."

However, he refused to answer.

👈 Watch the penalty shootout between the Netherlands and Argentina

As for Alexis McCallister, the Brighton player, he confirmed that he "will not address the arbitration decisions, and that Messi spoke on behalf of all of them, but he expressed his shock at the large number of yellow cards raised by the referee, even if there was a delay in decisions and a lack of smooth play."

He pointed out that facing the Netherlands was difficult and exhausting, and playing against Croatia in the semi-finals "will not be less difficult, especially after the victory it achieved against Brazil."

In turn, Benfica's Portuguese defender Nicholas Otamendi said, "The match was bigger than the referee, and this confirms the many frictions between the players and his lack of intervention at the right time, which developed into collective clashes between the players of the two teams and even the substitute players entering the problem."

He expressed his confidence that "the national team is able to move forward," but refused to talk about that they are candidates for the title, considering that "winning the next match means qualifying for the final, and after that we are separated from the title by one match."

Summary of the match between the Netherlands and Argentina |

Argentina reach the golden square and Messi continues to shine

On the other hand, the Netherlands national team players - who succeeded in returning the score and snatched the equalizer in the 101st minute (the most late goal scored in World Cup matches) - hoped to continue the uprising and cross into the semi-finals, but things stopped at a penalty shootout.

Most of them refused to speak, and those who spoke did not answer the issue of the referee and the extent of its impact on the results of the matches.

We also asked Argentine journalists about their opinion of referee Lahoz's performance in the confrontation, which was described as "the best so far in the Qatari World Cup."

Pablo of the Argentine sports channel D. Sport says, "The referee spoiled the match, and it should have ended in its original time, but he insisted on advertising yellow cards as if he was distributing candy, and he counted 10 minutes, and this was exaggerated, let alone He calculated the mistake from which the equalizing goal came, and it was not correct.”

In turn, Augustine of the Argentine ESPN channel indicated that the referee Lahoz "seemed to insist on straining the Argentine national team players, and more than once he argued with Messi, and the conversation between the two men after the end of the first half lasted for minutes, and it seems that Messi He believed that the referee was prejudiced against his colleagues, and when the protests increased, the referee warned Messi.

He said, "Although the players of both teams protested against the referee's decisions, what was more influential and controversial was against our team."

Lautaro Martinez scored the last penalty shootout and led Argentina to a 4-3 victory over the Netherlands after the end of the original and extra time of the match with a 2-2 draw, and Argentina set up a meeting with Croatia in the semi-finals.

Messi scored a goal and granted an assist, to enhance his country's chances of competing for the World Cup title, which has been absent from his country's coffers since 1986.