Morocco writes history for the Arabs, Ronaldo's disappointment and Eto'o's apology. The harvest of the 17th day of the 2022 World Cup

The 17th day of the 2022 World Cup in Qatar was historic for Morocco and the Arabs, after achieving an unprecedented achievement by qualifying for the quarter-finals at the expense of Spain. 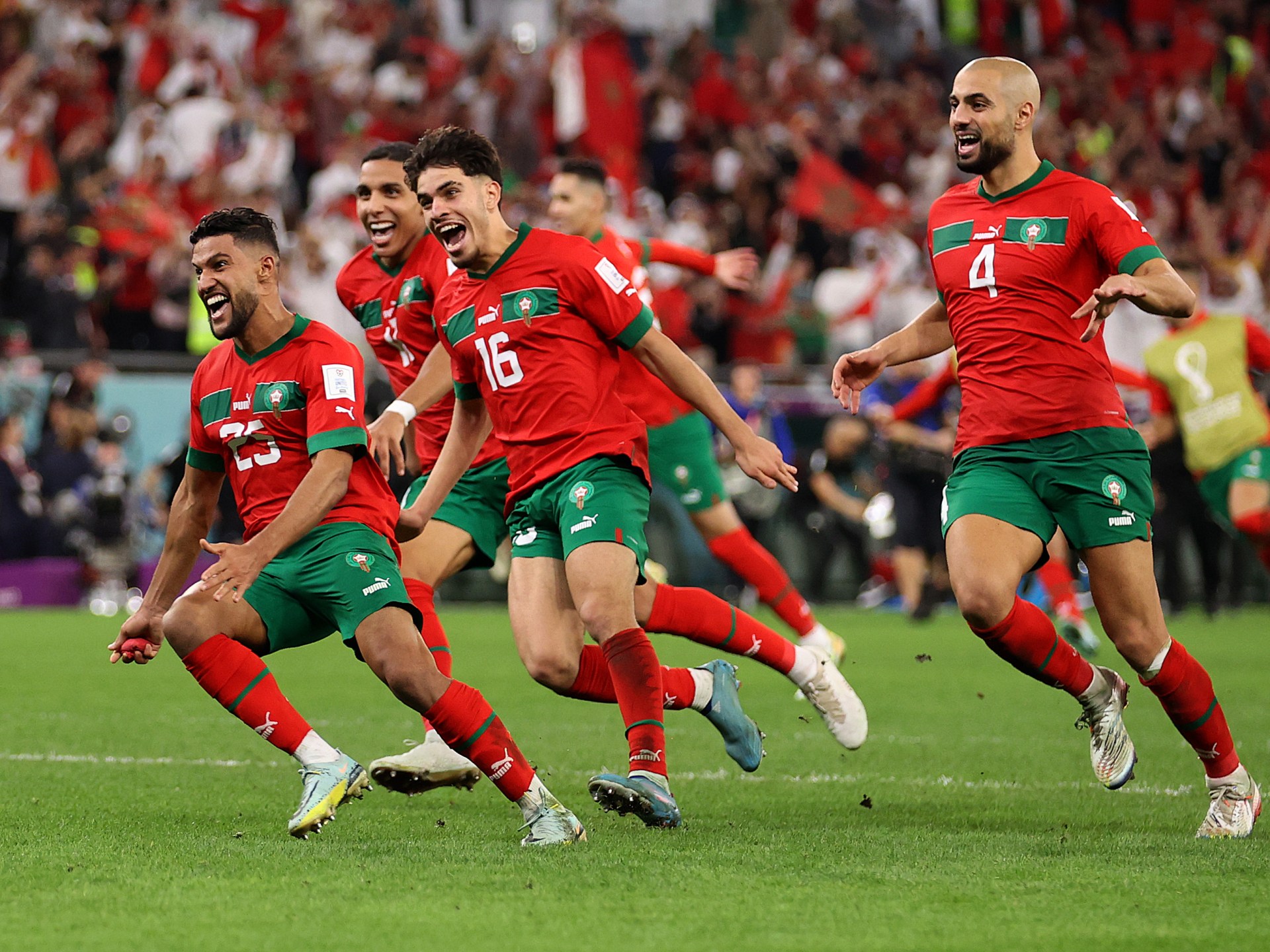 The 17th day of the 2022 World Cup in Qatar was historic for Morocco and the Arabs, after achieving an unprecedented achievement by qualifying for the quarter-finals at the expense of Spain.

The Moroccans staged a football epic at the Education City Stadium, and achieved a wonderful victory over “La Roja”, which brought them to the quarter-finals for the first time in the history of Arab football alike.

This victory witnessed several other historical moments, most notably the Emir of Qatar's celebration of Morocco's qualification, at a time when the Portuguese Gonzalo Ramos was replacing Cristiano Ronaldo in the best possible way in the Portugal-Switzerland match.

Moroccan achievement and a Portuguese sweep

The Moroccan national team wrote a new history for itself, the Arabs and the African continent, by reaching the quarter-finals of the World Cup, for the first time in its history.

This qualification came after the victory over Spain by penalty kicks, in which goalkeeper Yassine Bounou starred, after the match ended in its four rounds with a goalless draw.

Morocco became the first Arab team to achieve this achievement, while Cameroon, Senegal and Ghana joined as the fourth team from Africa to reach this stage.

In the second match, Portugal defeated its Swiss counterpart 6-1 at Lusail Stadium, in a meeting that witnessed Cristiano Ronaldo sitting on the bench, and his compatriot Gonzalo Ramos, who scored 3 goals (a hat-trick), in his third match in the World Cup Qatar, and the first match in which he played a key role.

What did Rerakki say to his players between halves?

Moroccan midfielder Bilal Al-Khanous revealed the message that coach Walid Regragui sent to the players during the half-time match against his Spanish counterpart.

Al-Khanous said after the match, "Between halftime, the coach told us that we have 45 minutes left to enter history, after achieving in 1986 by reaching the round of 16 in the World Cup. Now we can write history again."

He added, "He told us to fight every ball for the sake of your families, for Morocco, and for the fans, and we managed to achieve that. We kept our nerve and fought until the last moment. We are looking forward to going as far as possible."

Significant scenes after the victory of Morocco

The joys of the Moroccan players by qualifying for the quarter-finals of the World Cup in Qatar witnessed many wonderful shots and scenes that were very popular on social media.

The Emir of the State of Qatar, Sheikh Tamim bin Hamad Al Thani, participated in the Moroccan celebrations, as he seemed happy with this achievement, raised the Moroccan flag from the stands, and saluted the players with the fans in the Education City stadium.

The stars of the Moroccan national team were also keen to celebrate the historic qualification by raising the Palestinian flag alongside the flags of Morocco.

The player, Ashraf Hakimi, who scored the decisive penalty shootout, preferred to celebrate the qualification with his mother, who was present in the stands, as he went to her on the stands, embraced and kissed her.

The future of Luis Enrique

Spain coach Luis Enrique refused to talk about his future after the exclusion from the World Cup, at the hands of Morocco, which he blessed to qualify for the next round.

Enrique said, "This is not the time to talk about my future. What I think about now is going back to my house, and I think I will talk about the future with the president of the federation next week. I am very comfortable in my work, and if it is up to me I will continue in it for the rest of my life, but I have to." Making the best decision for myself and the team."

He added, "I am the one who bears the responsibility for the loss. I chose the first 3 players to take penalty kicks. I am satisfied with my team and proud of the players. I congratulate the winning team."

Bono confirms: The most important thing is to win against Spain

Yassine Bounou, goalkeeper of the Moroccan national team, commented on his brilliance and success in blocking two penalties during his country's match against Spain.

Bono said, "What happened is a mixture of intuition and luck, the most important thing is that we won. Hats off to the whole team, they did a great job. It is not easy to focus 120 minutes against a Spanish team that has possession of the ball."

He added, "When I saw the players running it was amazing. It's hard to comprehend these moments. You have to focus on yourself, and then go into the next match with that desire and joy that we see in the eyes of the players."

Bono, who won the Man of the Match award, concluded, "Praise be to God, I thank the players who made tremendous efforts in a full interview, dealt with the match and played with our capabilities. We congratulate the Moroccan people."

Portuguese striker Gonzalo Ramos, Portugal and Benfica, grabbed the spotlight in the match in which his country defeated Switzerland 6-1, after scoring 3 goals (a hat-trick).

Ramos became the first player to score (a hat-trick) in his first participation in the starting line-up in the World Cup, since Germany's Miroslav Klose in the 2002 World Cup, according to the "Opta" network specialized in statistics.

Ramos scored more goals in the knockout rounds of the World Cup than Lionel Messi (1) and Cristiano Ronaldo (0) combined.

Samuel Eto'o, President of the Cameroonian Football Federation, hastened to apologize for what happened to Algerian Said Saadouni, the creator of content on YouTube.

Eto'o appeared in a video clip attacking Saadouni after Gambian referee Bakary Gassama mentioned in front of him, referring to the referee of the play-off match to qualify for the World Cup, which ended with Algeria's loss to Cameroon 2-1.

Eto'o published a statement on his official account on Twitter, in which he said, "I apologize for losing my temper and reacting that did not reflect my personality. I was insulted and accused of cheating without evidence."

He added, "The scenario of losing Algeria was harsh, but according to the laws, everything presented against us by the Algerian Federation has been rejected, so I call on it to take responsibility and put an end to this bad atmosphere before a more serious tragedy occurs."

The reason for Mbappe's absence

The absence of Kylian Mbappe, the star of the French national team, worried the French, before the expected date against England next Saturday, in the quarter-finals of the World Cup.

However, the French Football Federation quickly reassured everyone about Mbappe, the 23-year-old, in an official statement.

"Kylian Mbappe works in the recovery room, which is normal two days after a match," the French Football Federation said.