2022 World Cup: why did Jules Koundé have to remove his necklace in the middle of a meeting?

Victorious after meeting Poland in the round of 16 of the 2022 FIFA World Cup, the French team made headlines due to a surreal streak. The referee interrupted the match to ask the defender of the Blues, Jules Koundé, to remove his necklace. Why this whistle in the middle of a match? Decryption signed Europe 1. 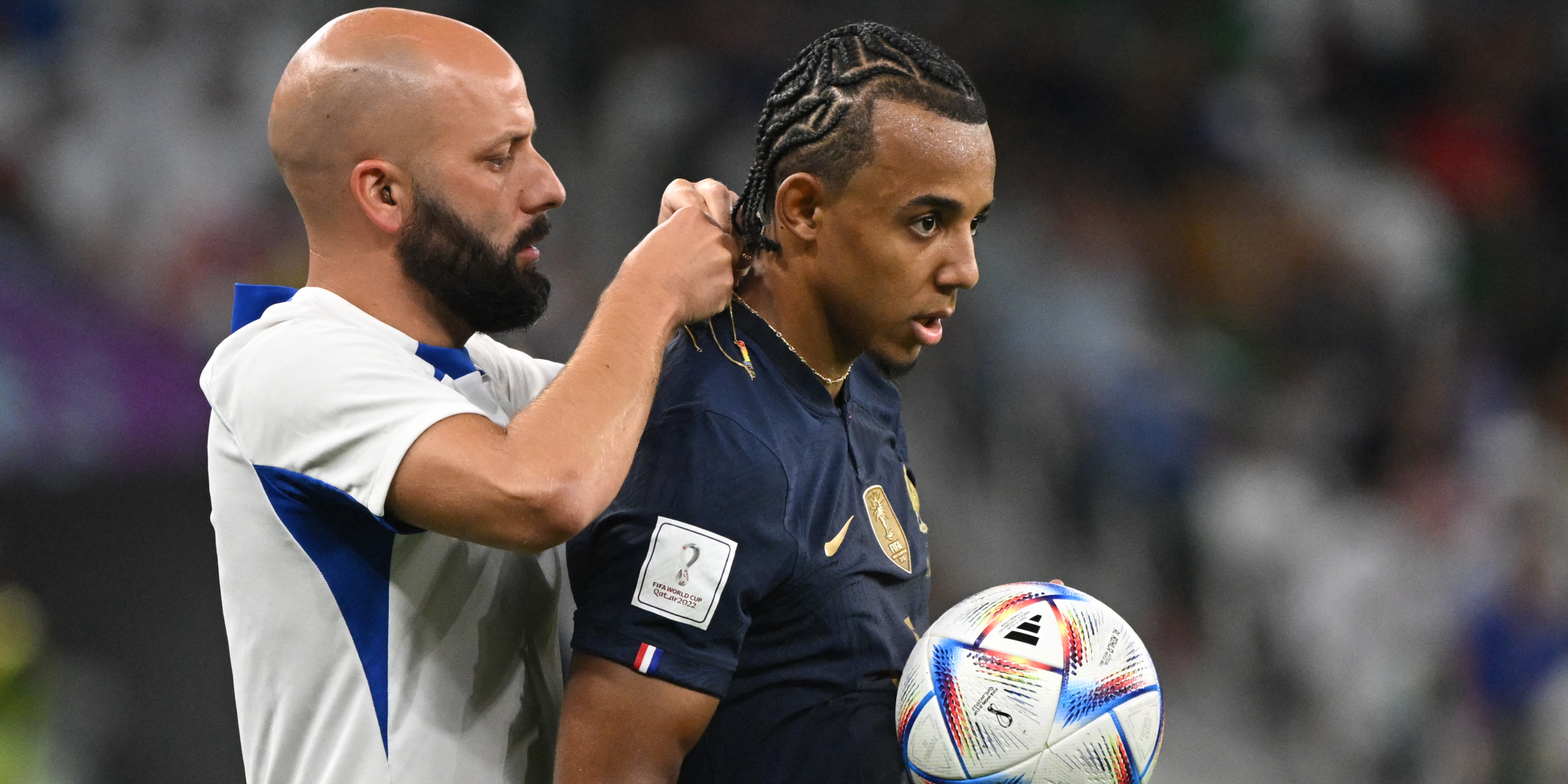 Victorious after meeting Poland in the round of 16 of the 2022 FIFA World Cup, the French team made headlines due to a surreal streak.

The referee interrupted the match to ask the defender of the Blues, Jules Koundé, to remove his necklace.

Why this whistle in the middle of a match?

The France team is focused on winning.

On Sunday, the Blues faced Poland in the round of 16 of the FIFA World Cup in Qatar.

For long minutes, France will struggle to win against their opponent.

Worse still, the supporters have long feared the sanction which could fall against one of the defenders: Jules Koundé.

From the training benches to the lawns of official matches, the rules are changing for professional football players - a regulation from which the French football team has derogated.

This necklace, worn by number 5 of Didier Deschamps' team.

In the 42nd minute, the referee blows the whistle during a stoppage in play: he interrupts the match to ask Jules Koundé to remove his necklace.

The scene is surreal, rare in the world of football.

Indeed, it is strictly forbidden to wear jewelry during matches.

Law number 4 of the Rules of the Game of FIFA, International Federation of Association Football, stipulates the following rules: "A player must not use equipment or wear anything dangerous. Any type of jewelry (necklaces, rings , bracelets, earrings, leather or rubber bands, etc.) is prohibited and must be removed".

2022 World Cup: the Blues outclass Poland thanks to a double from Mbappé (3-1)

The wearing of outfits is very supervised

In addition, the text stipulates that "players must be inspected before the start of the match, and substitutes before entering the game".

A scrutiny that makes it (usually) impossible for players to slip through the cracks.

It specifies the protocol to be followed by the referee in the event of non-compliance with the rules: "If a player wears or uses an unauthorized or dangerous item or jewellery, the referee must order the player: to remove the item ; to leave the field at the next stoppage of play if he cannot or does not want to comply. A player refusing to comply or handing over the article must be warned."

A warning, which could result in sanctions.

>> Find the Journal of the 2022 World Cup every day on Europe 1, official radio

The wrath of coach Didier Deschamps

Jules Koundé's misstep did not prevent the player from celebrating the victory of the Blues.

In the mixed zone, the defender justified himself by wearing this collar.

"It never happens to me, but this time I forgot. The ref only told me to take it off, but nothing more."

If some have challenged the star of FC Barcelona after this sequence, others have however had fun with the situation: we can now admire on Twitter several photo montages of Jules Koundé with a cap on his head and AirPods in his ears.

But the same cannot be said of the coach of the Blues.

The victory was not enough to blur the wrath of Didier Deschamps.

In a press conference, the 1998 world champion castigated the attitude of his defender.

The referee warned us [...] players are not allowed to wear bracelets or necklaces.

Nor will they play with a watch or sunglasses.

"You're lucky that I'm not in front of you, otherwise..."

Didier Deschamps comes back to the necklace worn by Jules Koundé!

Some have noticed that multicolored inscriptions on the necklace of Jules Koundé.

Is it the flag of Benin, the country from which it originates?

From the LGBT community?

The theories are numerous, but Didier Deschamps does not "know the meaning".

"I don't know what he has on his collar, I know that Jules is a bit of a superstition, he has it in training", he said again, admitting that he is "our fault".