Today, the Meydan International Racecourse in Dubai hosts the "Union Day" race, which is organized by the Dubai Racing Club to celebrate the 51st Federation Day of the UAE, in conjunction with the fourth evening in the races of the new season, and 66 elite local and international horses compete for their titles.The program includes 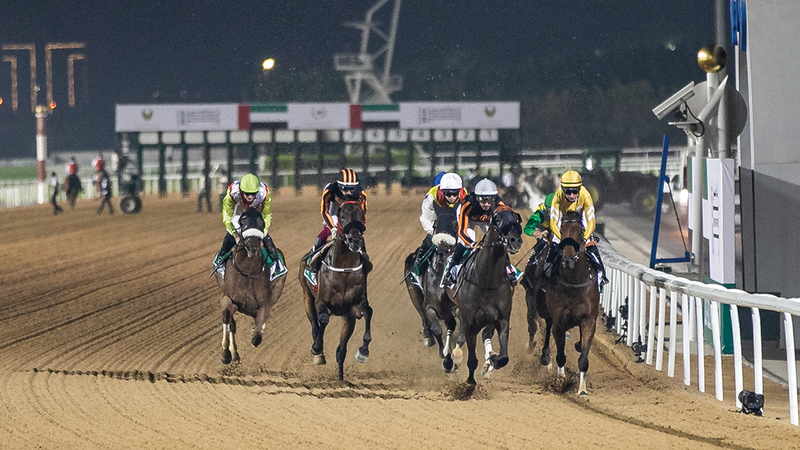 Today, the Meydan International Racecourse in Dubai will host the "Union Day" race, which is organized by the Dubai Racing Club to celebrate the 51st Federation Day of the UAE, in conjunction with the fourth evening in the new season's races, and 66 elite local and international horses are competing for their titles.

The festive program includes seven runs, all of which are held on sandy tracks, and the total prizes amount to 652,500 dirhams.

The ceremony includes allocating cash prizes for the racing fans, as announced by the Dubai Racing Club the day before yesterday in an official statement, in addition to other prizes including vouchers provided by the Meydan Hotel, and 26 in-kind prizes were announced, including 15 mobile phones. , and six portable computers (laptops), in addition to five tablets (tablets), and 12 other winners will be selected, each of whom will receive an amount of 500 dirhams among the 6000 dirhams prizes, which are distributed to the lucky ones in the track races, which raises the number of winners to 39 winners, and these prizes will be drawn after the end of the sixth round, with free vouchers distributed upon entering the track.

A member of the Board of Directors and Director General of the Dubai Racing Club, Major General Dr. Muhammad Issa Al-Azab, confirmed that “The Dubai Racing Club is always keen to interact with national and community events, as well as major events such as the 51st Federation Day of the UAE, and we are pleased to work again in partnership with the Ministry Defense to celebrate this important occasion, and we thank them for their support ».

The sponsorship of the armed forces and military units for the ceremony comes in honor of the most wonderful miracles of sacrifice and redemption offered by the valiant armed forces, with their heroism and honorable achievements in all the tasks entrusted to them inside and outside the country.