The Netherlands wins Qatar.. and qualifies in the lead

Rising star Cody Khakpo scored for the third time in a row, and led the Netherlands national team to reach the final price of the 2022 World Cup in football, after defeating the host country Qatar 2-0, yesterday, at Al Bayt Stadium in Al Khor city, in the third and final round of Group A. Khakpo opened Register from 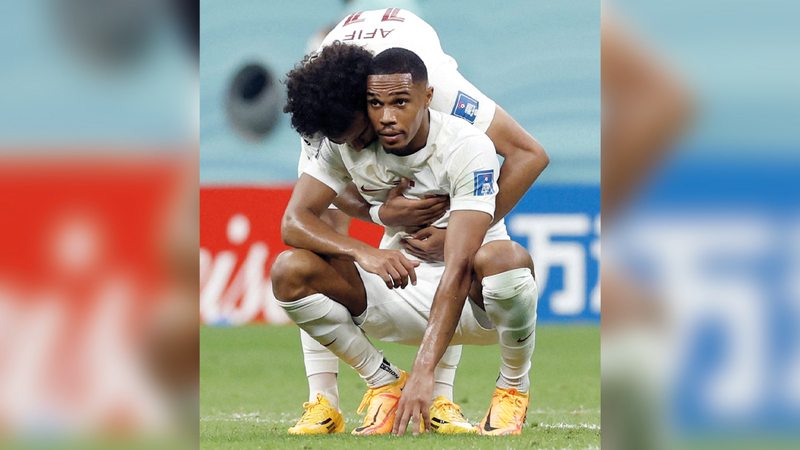 The Netherlands wins Qatar.. and qualifies in the lead

Rising star Cody Khakpo scored for the third time in a row, and led the Netherlands national team to reach the final price of the 2022 World Cup in football, after its victory over the host country Qatar 2-0, yesterday, at Al Bayt Stadium in Al Khor city, in the third and final round of Group A.

Scorers opened the scoring in the middle of the first half (26), and Frankie de Jong increased the score early in the second half (49).

The Netherlands, runners-up in 1974, 1978 and 2010, needed a tie point to ensure their official qualification, after their difficult opening victory over Senegal 2-0 and then their draw with Ecuador (1-1), while Qatar, the Asian champion and participating for the first time, had officially lost its hopes of qualifying. After falling to Ecuador 0-2, then Senegal, the African champions, 1-3.

The Netherlands raised its tally to seven points, one point ahead of Senegal, who made up for their slow start without injured top scorer Sadio Mane, and achieved their second successive victory at the expense of Ecuador 2-1 at Khalifa Stadium.

The Qatari fans answered the call to attend the stadium, despite the loss of hopes, so the stands of Al-Bayt Stadium, which was inspired by the traditional Bedouin tent, were filled with 66,000 spectators.

And coach Louis van Gaal, who led the Netherlands to third place in 2014, pushed for the first time striker Memphis Depay in the starting line-up after entering a substitute in the first two rounds, because he had not fully recovered from his thigh injury, so he played alongside Khakbu, one of the tournament’s discoveries, while Martin de Roon participated instead. From Toon Combiners in the middle.

In Qatar, Spanish coach Felix Sanchez, who was criticized for isolating his team for about five months in Europe before the tournament, retained goalkeeper Meshaal Barshim for the second time, after the mistakes made by Saad Al-Sheeb in the first match against Ecuador.

The Netherlands relatively dominated the first half without much danger, while the Qataris tried to abandon their shyness with quick runs on the wings, without succeeding in delivering the ball to striker Al-Moez Ali.

Depay, who scored 12 goals in the qualifiers, was the source of the Dutch danger in the first half, as he fired a high ball over the crossbar from inside the area (15), then Barshim stood between him and the net (25).

But in the next attack, and after three beautiful passes, the ball reached Khakpo, who passed by Asim Madibo and fired a powerful low shot from the edge of the area that entered the right corner of Barshim's goal (26).

The 23-year-old Dutch player, Eindhoven, had scored the first Netherlands goal in the tournament six minutes before the end of normal time in the Senegal match, then the opening goal also in the Ecuador match, to have opened the scoring in the three “mills” matches so far, so he joined the likes of Johan Neskens (1974), Dennis Bergkamp (1994) and Wesley Sneijder (2010) who scored in three consecutive World Cup matches for the Netherlands.

He also became the second player to open the scoring three times in the same group stage, after Italian Alessandro Altobelli in 1986.

Ismail Mohamed tried to respond from the same distance, but goalkeeper Andres Nobert picked up the ball (29), and Al-Anabi launched several attacks on the area of ​​defense captain Virgil van Dyck, before Al-Orange concluded the half with a long shot by Depay.

The Netherlands, which did not lose in the last 16 matches in the group stage, decided the first confrontation between the two countries, when Depay fired a powerful ball a few meters from the goal, Barshim blocked it, and instead of being distracted by Miguel or Khokhi Boualem, de Jong slipped and doubled the numbers in the empty net (50 ).

Sanchez, the son of the La Masia Academy, who took over the training of the first team in 2017 and seemed frustrated on the field, made three substitutions at once about half an hour before the end, including Mohamed Muntari, who scored the honorary goal against Senegal.

A goal for the Netherlands was canceled due to a handball on Khakpo (68), and Barshim sent a dangerous cross to Dumfries (74).

The stands began to empty 10 minutes before the end of time, while substitute Stephen Berghus concluded the competition with a beautiful shot that hit the crossbar (90 + 2), causing the Qatar national team to lose a third in a row.