Boujessim: The excellence of Emirati arbitration in the 2022 World Cup is a message to the short-sighted

The former World Cup football referee, Ali Bujsim, said that the moment he will never forget, and will remain stuck in his memory, is the match between France and Senegal at the opening of the 2002 World Cup in South Korea and Japan, which is the third World Cup that he participates in managing, pointing out that 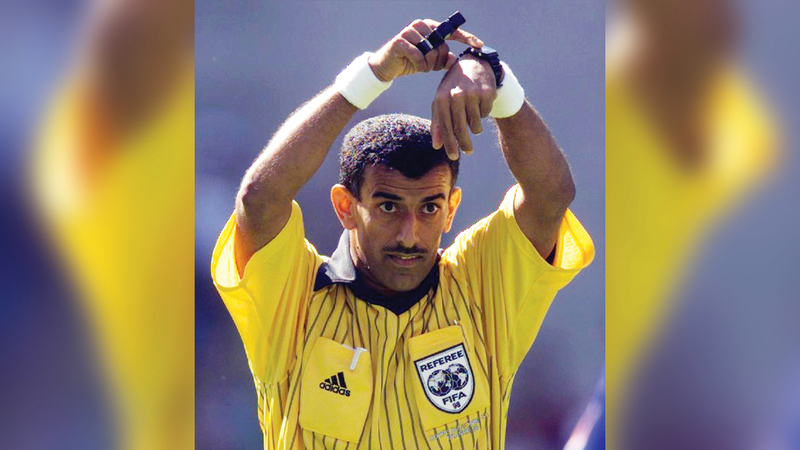 Boujessim: The excellence of Emirati arbitration in the 2022 World Cup is a message to the short-sighted

The former World Cup football referee, Ali Bujsim, said that the moment he will never forget, and will remain stuck in his memory, is the match between France and Senegal at the opening of the 2002 World Cup in South Korea and Japan, which is the third World Cup that he participates in managing, pointing out that he was surprised after The match was sent by a letter signed by his fellow referees participating in the management of the World Cup matches, and on it was the name, photograph and signature of each referee, praising his management of the match, and thanking him for their honorable representation, indicating that he also received at the time a tribute from the then president of the International Federation of Football Associations, Joseph Blatter, indicating his pride as well. He also led the Brazil-Netherlands match in the 1998 World Cup semi-finals in France.

"The opening match in the World Cup is always the title, and it is a message of confidence from the International Federation in the referee of the opening match," Bujsim told Emirates Today.

Regarding the message sent by the distinguished Emirati arbitration team in the World Cup «Qatar 2022», represented by the referee Muhammad Abdullah Hassan and the two assistant referees Muhammad Ahmed Al Hammadi and Hassan Al Mahri, Bujsim said: “Everyone witnessed how the Emirati arbitration was distinguished in the World Cup, and I say to the short-sighted. Those who seek immediate and short interests for their teams and demand foreign rulers that Emirati rule is better than foreign rule.

Bujsim considered that some of the existing administrators "harmed Emirates football, did not develop in their clubs, and ruined their clubs."

Bujsim is considered one of the most prominent referees in the world, who left a distinguished mark in the field of arbitration, and reflected the honorable face of Emirati arbitration in various tournaments, after he was present in the World Cup three times in 1994 in America, 1998 in France, and 2002 in South Korea and Japan.

Bujsim praised the arbitration performance of the Emirati arbitration staff at the World Cup in Qatar, led by Mohammed Abdullah Hassan, indicating that he had gained great confidence by being able to manage two matches in the first stage of the tournament, namely Spain, Costa Rica, Cameroon and Serbia, and he appeared during them at a distinguished level, stressing that he hopes that Muhammad Abdullah Hassan continues the same arbitration level, pointing out that he expects the Emirati crew to lead the final rounds in the tournament, compared to the arbitration level he has presented so far and his access to managing two matches in the first round, and this is a result of the great confidence he has gained.

In response to a question about the significance of Muhammad Abdullah Hassan's presence in the World Cup for the second time in a row, Bujsim said: "The referee, Muhammad Abdullah, got the opportunity and succeeded in it, and he is a qualified and diligent referee, and therefore he continued his success."

Bujsim pointed out that the most prominent characteristic of Muhammad Abdullah Hassan is his calmness, besides that he is respected by players and coaches during the matches he runs, and there is conviction by the International Federation of Football Associations in his arbitration performance.

Bujsim confirmed that he remembers the great responsibility that rested on him as a referee and the whole world watches him as he decides the fate of the matches, especially since at that time there was no video referee (VAR), describing those days and memories as sweet.

I love Brazil and my heart is with Saudi Arabia, Morocco and Japan

About his favorite team in the 2022 World Cup, Bujsim confirmed that he likes Brazil very much, but his heart is with the teams of Saudi Arabia, Morocco and Japan, which he is proud of being an Asian team, pointing out that he likes the performance of the Brazilian national team player and the English Arsenal team, Gabriel Martinelli, who participated in the second half of the match. Brazil in front of Serbia, and is expected to have a big name with Brazil.

He expected the Spanish national team to return to the competition, as well as Argentina, pointing out that Argentina played the Saudi Arabia match as a champion, so it lost the match.

Bujsim revealed that his joy was great with the Saudi national team's victory over Argentina.