The rise of Tuktamysheva, the brilliance of Muravyova and the Semenenko Theater: a consolidated rating of single skaters in the 2022/23 season

Elizaveta Tuktamysheva for the second time this season was ahead of all her competitors in domestic competitions, but the question of whether she was stronger than Sofya Muravyova remained open. Ilya Malinin in Espoo and Yevgeny Semenenko in Perm turned their competitions into a one-man theater, but the St. Petersburg athlete retained this correspondence duel. The summary rating of single skaters in the Grand Prix series in figure skating is in the material RT. 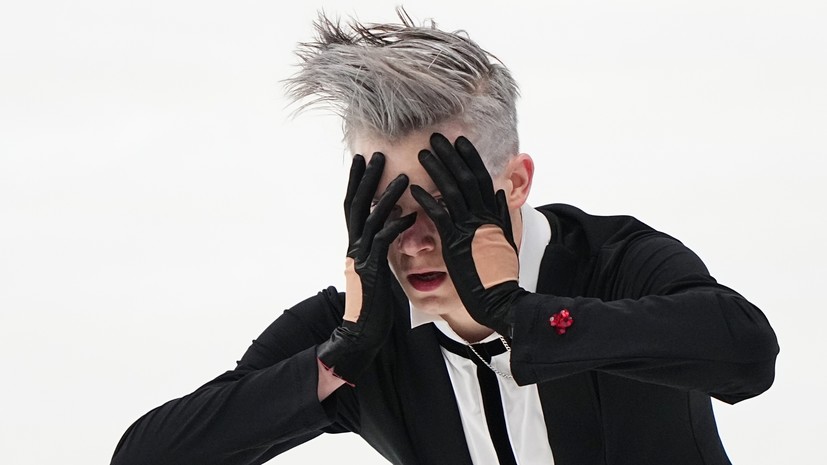 Shine of Tuktamysheva and Muravyova

The women's tournament of the final stage of the Russian Grand Prix ended with two absolutely outstanding free skates by Elizaveta Tuktamysheva and Sofia Muravyova, and this was the very case when it was completely impossible to objectively answer the question: “Who won?”

According to the final protocol, Lisa did it.

She lost the short program to Muravyova, but outran her rival in the free program, as a result of which the gap between the athletes was microscopic - 0.79 points in favor of the St. Petersburg athlete.

At the same time, it was obvious that a large part of Tuktamysheva's assessment consists of components that are not spelled out in the rules, but always influence referee opinions: these are length of service, the most striking milestones of the previous career and the influence of the coaching staff.

What has been said is not at all a reproach to Lisa.

Moreover, if I myself sat at the refereeing console, I think I would give her preference in the same way.

And not even because Tuktamysheva has been skating at the highest level for a decade and a half, won many trophies during this time and deserves that others respect all this.

The reason, rather, lies in the understanding that this skater is much more difficult in all respects.

In the same way, it was difficult for the heroes of the early 2000s to forcibly adjust themselves to the requirements of the new judging system.

If you are not accustomed to certain requirements from early childhood, the saturation of programs with all kinds of steps, learning new approaches to jumps, new positions in rotations is given by completely different efforts.

Not to mention the fact that it is a hundred times more difficult to decide on ultra-si in adulthood than when you are youthfully fearless.

All this Lisa continues to implement before our eyes.

The performance in Perm is another example of this.

Perhaps even more so.

Unlike Tuktamysheva, she has never won the short program while skating at the senior level.

I have never been in the shoes of a person who goes out on the ice last against the backdrop of stands roaring not in your honor.

Never fought so hard with a rival who is idolized by almost the whole world.

Who exactly should be given credit for this - the skater herself, or her mentor - is the second question.

But the tournament will certainly be remembered for the fact that the novice coach Evgeni Plushenko won the short program of the women's single skating against the great coach Alexei Mishin and did not lose to him in the free skate.

It is clear that such a formulation should be taken with irony for the time being (here one of the favorite formulations of Alexei Nikolayevich “Won, but did not surpass”) is very out of place, but the fact is obvious: Evgeny raised a very worthy figure skater, capable, and most importantly, able to take a hit.

Is it right that in our rating both girls push Sofya Akatieva down?

The arguments here are simple: the total score of the champion and vice-champion of the Permian stage is higher than that of Akatieva at the first Moscow stage - 239.94 and 239.15 against 236.68.

In addition, at the next start, Sophia lost to both Tuktamysheva and Muravyova in a head-to-head fight.

A separate curtsy should be made to Alina Gorbacheva from Tver, who not only won a bronze medal in Perm, but overtook Ksenia Sinitsyna.

The last clarification was not made by chance: in the current women's singles skating, few people know how, if at all, how Sinitsyna skates.

Perhaps no other figure skater manages to create the effect of a soaring glide, flight over the ice surface so clearly.

Moreover, this is not some kind of innate skill, but the result of the hardest and at the same time invisible work.

So at least the coach of the athlete Svetlana Panova explained in a recent interview, emphasizing that she always paid great attention to practicing gliding, because only through free possession of the skate comes the real expressiveness of skating.

It's just more difficult to achieve this than to learn this or that jump from the ultra-c category.

Not to mention the fact that this process takes a lot of time from the athlete.

And secondly, by the fact that she made an attempt to perform a quadruple salchow in the program.

A 15-year-old student of Sofia Fedchenko landed a jump on two legs, but the excellent salchow attempts at the warm-up speak in favor of the fact that Alina has this jump.

She beat Sinitsyna with the overall complexity of the content.

In comparison with the first performance, the figure skater improved her result by 21.52 points and rightly displaces the 2022 world vice-champion Luna Hendrix from the tenth position, making the “top ten” completely Russian.

The latter, by the way, lost the free skate to Mai Mihara in Espoo at the final stage of the ISU Grand Prix.

Obviously, they will fight in the final with Kaori Sakamoto and Kim Ye Lim, but this spectacle is unlikely to be exciting.

Summary rating of singles after six stages of the Grand Prix:

Even if Evgeny Semenenko's free skate in Perm remains the best in his career, and this personal record will never be surpassed by the skater, now the ward of Tatiana and Alexei Mishin gets what he deserves.

Namely - the first line in the men's ranking.

Competing in the complexity of content with such rivals as Ilya Malinin and Shoma Uno is an unpromising task, but the same Uno, for example, went for broke at the stage in Canada: he announced five quads in a free program, somehow coped with three, and on At home stage in Sapporo, he performed four quadruple jumps and a butterfly instead of a flip, in connection with which the basic difficulty of the program fell to 80.03.

The “base” of Evgeny was 85.10, and the skater did not drop out of the image for a second.

And it always makes a powerful impression.

The competitions themselves have turned into a theater of one actor, and this further emphasized the reality: in the Russian men's single skating at the moment there is one undisputed leader - this is Semenenko.

With which, first of all, I would like to congratulate not Mishin himself, but his wife Tatyana.

The current Zhenya is primarily her merit.

The result of the parallel ISU Grand Prix in Espoo, where Ilya Malinin won, it would seem, should unconditionally bring the young American to the leaders of our rating.

Although it should be counted as an unconditional plus for Ilya that it was he who did not allow the men's tournament to slide into a completely dull sight.

When quadruple jumps were just beginning to appear in men's programs, many coaches (including Mishin) noted that such an element at first could destroy the entire program, since it required a very special concentration.

Like, the athlete jumped, left, exhaled - and then everything else fell down.

Malinin's jumps are a phenomenon that has never happened before in men's singles.

And it's not just about the quadruple axel.

Ilya is able to jump incredibly easily and rotate so rapidly that it is not always possible to count the turns.

But, perhaps, just because of this lightness, it becomes difficult for an athlete to keep a lot of small and boring things in his head.

For example, focus on the twisting of elements.

Hence, personally, according to my feelings, some carelessness of the mood.

Ilya is still playing in competitions, but does not compete seriously.

He can afford not to complex at all about a not very successful landing, knowing that he compensates for the lost points with the next jump.

Perhaps, in this way, the hidden effect of that very quadruple axel, which takes the lion's share of strength and attention from the skater, is simply manifested.

This version is supported by the fact that at two Grand Prix tournaments Ilya made mistakes not in one jump, but in different ones.

That is, the athlete does not have any problems that could be written down as chronic.

In other words, with the absolutely breathtaking complexity of the free program, Malinin has not yet squeezed the maximum out of his skating.

When it comes to a talent of this magnitude, I would like to believe that over time, Ilya's programs will have both adult depth, like Shoma Uno, and the ability to play with the public, as Javier Fernandez and the late Nathan Chen brilliantly did, and much more.

In the meantime, Malinin is jumping, jumping and jumping again.

But we must admit the obvious: as soon as Ilya begins to perform all the elements accurately, reproaches for a lack of skating skills, as well as expressiveness of skating, will turn out in favor of the poor.

Because there are no such tools in the second assessment that could compensate for the superiority of an 18-year-old athlete in the first.

Summary ranking of singles after six stages of the Grand Prix:

Sports 2023-01-20T18:52:21.368Z
The duel of Zagitova and Valieva, the role of Kondratyuk and 20 million prize money: what is interesting about the First Channel Figure Skating Cup
Sports 2022-12-25T10:27:50.850Z
Champion drama: how Valieva lost to Akatieva, and Tuktamysheva won a medal for the first time since 2014
Sports 2022-12-23T23:56:50.067Z
Butterfly effect: Valieva flunked the trixel and lost to Akatieva, Tuktamysheva and Muravyova in the short program
ADS
Sports 2022-12-29T14:17:12.954Z
Shcherbakova's triumph in Beijing, Trusova's five quads and new national champions: events of the year in Russian figure skating
Sports 2022-12-21T19:14:09.120Z
Complication of programs, refereeing in dances and Tuktamysheva's quads: what to expect from the Russian Figure Skating Championship
Sports 2023-01-22T21:53:11.029Z
The victory of Boikova and Kozlovsky, the revival of Aliyev and the separation of Akatieva: how Zagitova's team won the Channel One Cup
Sports 2022-12-25T20:57:44.964Z
Valieva in the role of Wednesday and K-pop from Semenenko: what do you remember about demonstration performances in the Czech Republic in figure skating
Sports 2022-12-22T13:33:00.448Z
Zhulin called Goumennik's leadership in the Russian Championship logical
Sports 2023-01-22T07:10:51.157Z
Muravyova's victory, a sensation from Mozalev and the fall of Zinina: what do you remember about short programs at the Channel One Cup