The photos that Germany does not want to remember: when Luis Enrique astonished Vogts, the Wallace that was Ballack and the harsh silences of La Cartuja

"I already played in '94 against them and the physical level was brutal... Their power was tremendous." 28 years have passed since that torrid noon in the stadium... 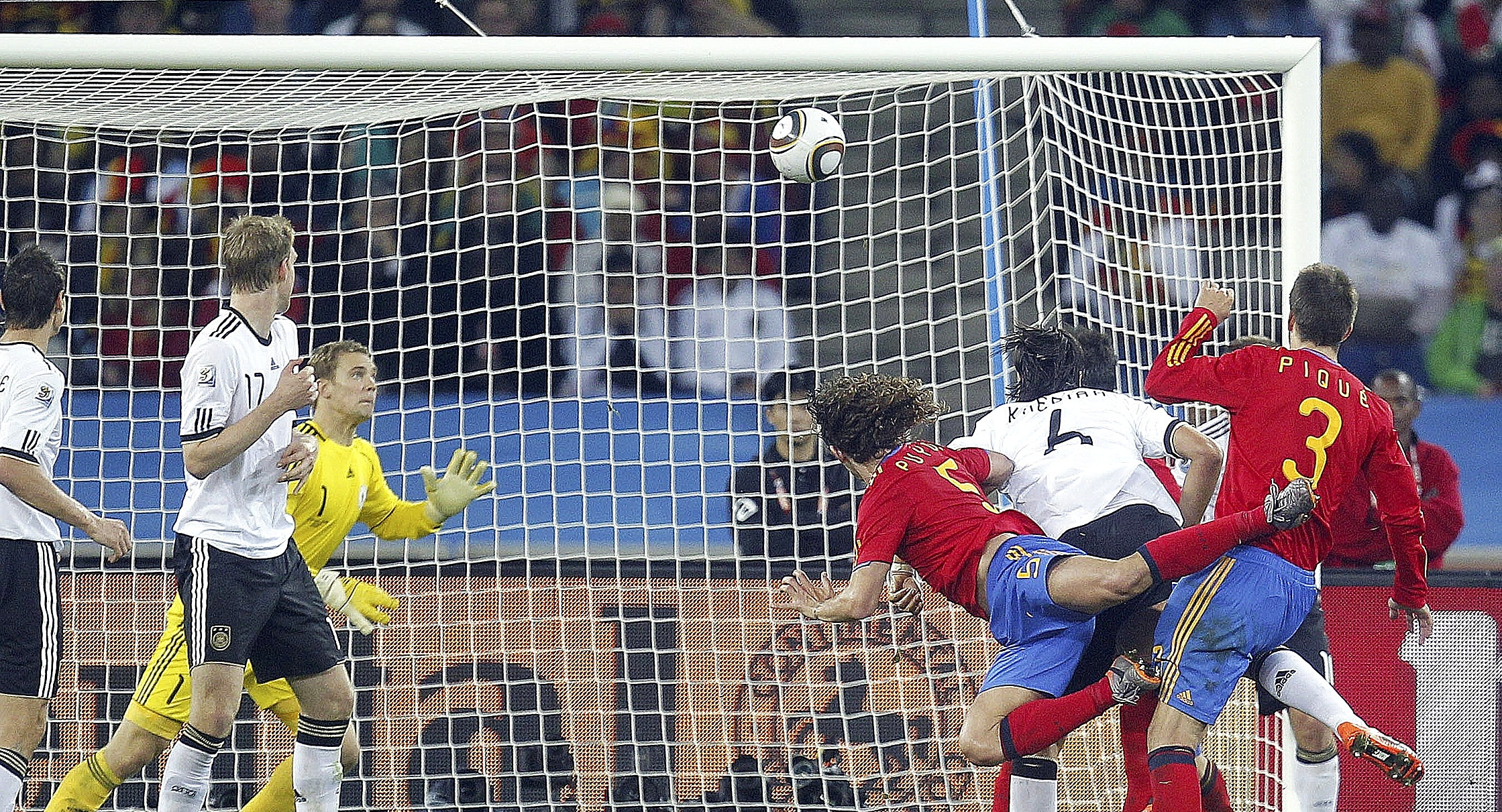 «I already played in 94 against them and the physical level was brutal... Their power was tremendous».

28 years have passed since that torrid midday at Chicago's Soldier Field stadium, but Luis Enrique, sitting yesterday in the auditorium of the Doha International Press Center, still had it well in mind.

He, at that time at Real Madrid, had just turned 24, and it was the first time that Germany crossed his path.

It was the s

Second game of the group stage, the same as today, only then the Germans were defending the crown won in Italy'90.

The coach today left his soul in a duel that ended in a draw (1-1).

Such was his display that the mythical

, a rival coach, publicly praised him.

«He has crushed us, he and Sergi make up the best left wing in the World Cup.

He was going like crazy », he came to say that afternoon, as some of the professionals present at that championship remember.

(Alonsotegi, 1956), that the first thing he does when responding to the call from EL MUNDO is to point out: «I am not the Goikoetxea that scored that day, that the same thing...».

“We had a strong defense, knowing that the real German potential was up there with Völler and Klinsmann.

, which is not the case now.

They had a tremendous selection."

The intrahistory of the red color that the national team wears: from FIFA's suggestion to the fact that Luis Enrique signed up

The intrahistory of the red color that the national team wears: from FIFA's suggestion to the fact that Luis Enrique signed up

From that side of Soldier Field, Andoni contemplated what is one of the best goals for Spain in its journey through the World Cups.

“That great goal, with no angle in sight, left us amazed on the bench.

We looked at each other's faces and said: 'Wow, wow!

And boy did he enter, "says Andoni, regarding the poisoned lash that was released by a guy whose name is almost the same as him:

"Yes, I wanted to center"

Jon Andoni (Pamplona, ​​1965) has been asked this a thousand times, but, 28 years later, with a Germany at the gates that has nothing to do with that, it is time to do it again for the umpteenth time.

- Did you want to cross or shoot?

He laughs again as he has done so many times since then.

He doesn't mind remembering it again.

«Yes, I wanted to center.

I raised my head, the shipment was poisoned and ended up inside », is his simple story about that target, one of the most talked about in the championship.

«That match was tough, with a very strong team and great players.

Now that team is changing, with impressive work coming from the youth ranks.

In a way, this game is a bit similar to that one, "adds who was a teammate of Luis Enrique in the Spanish team.

Both non-negotiable pieces for

in that distant World Cup.

«Luis Enrique was a boy with a lot of character and he liked to win at everything.

Now, in his own way, and saving the distance, he has a certain resemblance to Clemente, he is capable of making a very strong group and dressing room », he completes.

Because Luis Enrique was a kid who did not generate indifference.

«He was a daring and uninhibited player on the field.

Outside he was pleasant and funny, you could chat with him.

He now he is on another mission.

He has taken things from other selectors and has the freedom to do what he wants, as he is doing », is Andoni's portrait of the current national selector.

Puyol scored in the semifinal of the 2010 World Cup in South Africa.

The embers of one of the four battles fought between Spain and Germany during the pages of the World Cups.

An intense story that began in Birmingham, in 1966, with a 2-1 victory for the then Federal Republic of Germany (FRG), West Germany.

The same result occurred at the Santiago Bernabéu, also in the group stage, in Spain'82.

was insufficient before those of

Then that print from 1994 would come, in Chicago.

And the last one, 12 years ago, in the South African city of Durban, with the eternal headbutt of

A header that ended up leading to the star that the Spanish team will wear tonight at the Al Bayt stadium.

, appeared alone, without any player at his side, at the official press conference.

The FIFA fine was well paid in order to guarantee the rest of its footballers, since its concentration hotel, the Zulal Wellness Resort, is more than 100 kilometers from the IBC in Doha.

In the same auditorium where Luis Enrique looked back minutes before, Flick gave up remembering the past.

"I have seen many confrontations, but it is time to look to the future," he specified.

Perhaps an enlightening piece of information was on his mind: Germany has not won any official duel against Spain since 1988. Along the way, two draws and three defeats in five games.

One of them, in the Euro 2008 final, against Ernst Happel from Vienna, with the indelible dart of

And with the no less famous previous speech of

"Wallace has surely been injured and such, but, worse, whoever comes out will run more," he assured days before the final, to the laughter of the footballers.

«Wallace or Bullets may play.

Whatever you want to call it.

I call him Wallace because yes », he recognized the day before, as collected by the Amazon Prime documentary 'Luis, the wise man of success'.

Tonight, Spain has the opportunity to send Germany home.

To the Germany of

He chats and jokes whenever he gets the chance.

Precisely the German team was the one who welcomed him on his return to the national team after the painful hiatus (1-1), in September 2020. And, also, who gave him one of his greatest satisfactions, a couple of months later , with the thunderous 6-0 win at La Cartuja, both during the League of Nations.

That tremendous night for Germany,

Since then, he has only played 49 minutes in two games.

They are the stories of Spain-Germany, a duel that time has turned into a kind of world classic.

Perhaps today, when the clock approaches 00:00 Qatar time, we must add one more stamp to remember in the future.