Sweets in the streets and pictures of Ozil .. Watch the harvest of the ninth day of the 2022 World Cup

The joys of the Arabs were renewed on the ninth day of the 2022 World Cup in Qatar, and everyone celebrated the historic victory that Morocco achieved at the expense of Belgium 2-0, after the first joy following Saudi Arabia’s victory over Argentina 2-1. 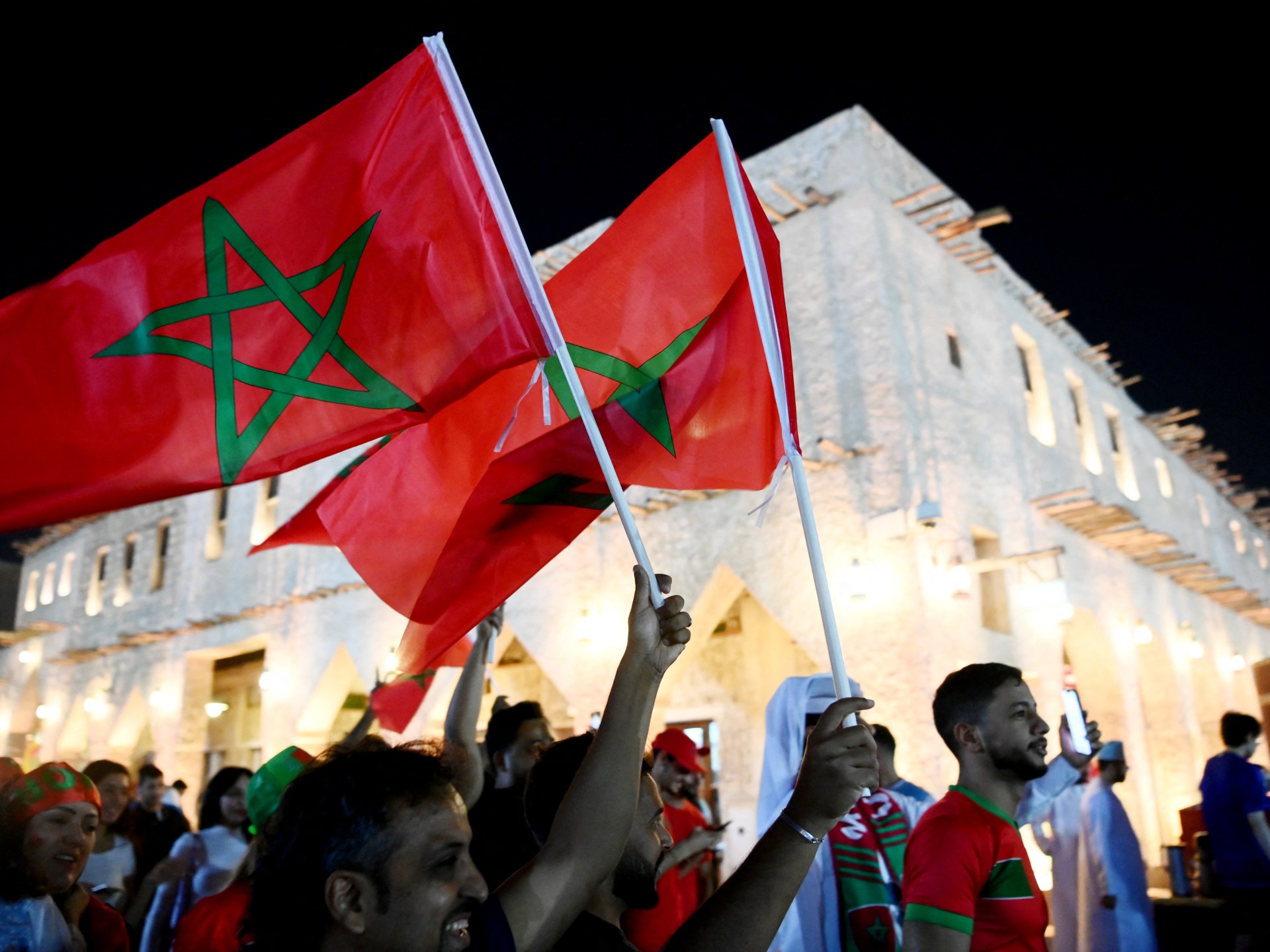 The joys of the Arabs were renewed on the ninth day of the 2022 World Cup in Qatar, and everyone celebrated the historic victory that Morocco achieved at the expense of Belgium 2-0, after the first joy following Saudi Arabia’s victory over Argentina 2-1.

The eighth day of the World Cup, although its most prominent title was Morocco, it witnessed a group of distinguished events, the most prominent of which remains the Costa Rican surprise, after the victory of the national team, which lost by seven in the first round, over Japan, which defeated the Germans, in one of the most prominent surprises of the "Arab World Cup", in addition to To the broad victory of the Croatian national team over Canada, which was officially eliminated from the competition.

As for the summit of the first round between Germany and Spain, it ended in favor of the Spanish team with a goal without a response.

Historic victory for the Lions

Morocco’s victory is the first of its kind in 24 years, specifically in the 1998 World Cup in France when the Atlas Lions defeated Scotland (3-0), a victory through which the “lions” hit a group of birds with one stone, as they scored the first 3 points and came close to reaching The second round, and the victory came at the expense of the world's second seed and one of the most prominent candidates for the coronation, which raised the level of confidence among the players, who were unable to reach the net in the first Croatia match.

Next Thursday, the Atlas Lions are waiting for an important date in order to ensure official qualification for the second round, when they meet Canada, in the third match of Group Six.

It is noteworthy that the only qualification for the Moroccan national team for the second round was in the Mexico tournament in 1986, when it faced Germany in the round of 16 and was defeated by it with a goal without a response.

A celebration of sweets in the Arab streets

As an expression of the Arab values ​​of generosity and giving, Qatari families chose to share their joy with the Moroccans by distributing sweets.

A number of social media pioneers shared pictures of this initiative, which received great praise and approval.

And from Doha to northern Syria, where the pioneers of a cafe celebrated the victory of the Lions by distributing chocolates and sweets to the attendees, especially children.

The Emir of the State of Qatar, Sheikh Tamim bin Hamad Al Thani, participated in the Moroccan fans' celebrations, after the "Atlas Lions" defeated Belgium 2-0 - today, Sunday - in the second round of Group F matches in the 2022 World Cup in Qatar.

After the end of the match, the Emir of the State of Qatar appeared, saluting the fans of the Moroccan national team, which dyed the stands of Al-Thumama stadium red.

The Prince exchanged greetings with the fans who unleashed joy after the distinguished victory today, which extends the joys of the Arabs in the tournament after the historic victory of the Saudi national team over Argentina 2-1 at the start of its career in the tournament.

They salute the Moroccan national team after its victory over Belgium 🇲🇦

Also, videos on social media showed the father Emir, Sheikh Hamad bin Khalifa Al Thani, along with Sheikha Moza bint Nasser, Chairman of the Board of Directors of Qatar Foundation for Education, Science and Community Development, and Sheikha Al Mayassa bint Hamad bin Khalifa Al Thani, Chairman of the Board of Trustees of Qatar Museums, as they exchanged Greeting and celebrating with the Moroccan national team members after the end of the match.

As usual in major football events, Boukhalal's second goal brought thousands of Moroccans out of their homes to the streets in order to express their great joy at this victory.

Dozens of pictures and videos were circulated in various streets of the Kingdom, of thousands of people celebrating in the famous streets and squares, chanting slogans of victory, and promising Canada victory and qualification for the second round.

The celebrations continue in Souq Waqif, with Morocco’s victory over Belgium, and the approaching qualification for the round of 16 # Qatar 2022 # World Cup_Qatar_2022 # Al-Kass channels pic.twitter.com/14zN5SoLWz

Likewise, hundreds of national team and Arab supporters in Qatar went out to Souq Waqif, one of the most famous landmarks of the Qatari capital, Doha, to celebrate this victory.

Contrary to what was expected, Japan failed to take advantage of its sudden victory in the first round at the expense of Germany, and reach the sixth point, after it fell to Costa Rica, the weakest link in this group, with a goal without a response.

The "computers" did not succeed in deciphering the net of Costa Rican goalkeeper Keylor Navas, for 90 minutes, while it received a fatal goal in the last breath of the match, thus complicating the task of reaching the second round, after it was within reach.

On the other hand, Costa Rica exploded, one of the most prominent surprises of this World Cup, after suffering the heaviest defeat in the first round against Spain (7-0), here it is regaining its balance against Japan, and reviving its hopes of reaching the round of 16.

Canada scored the first goal in its history in the World Cup, and the fastest in this version, by Bayern Munich star Alphonso Davies, but in return it became the second team to officially leave after Qatar.

The Canadians' enthusiasm soon faded in front of the strength of the world champion's runner-up, who scored 4 goals, and ended the match victoriously, 4 goals to one.

Mesut Ozil is present at the summit today

A number of fans present at the match that brought Germany together in Spain raised pictures of the German star of Turkish origin, Mesut Ozil, who retired from playing with the German national team years ago after being subjected to racist attacks.

The fans' messages came as a rejection of the double standards of the German national team players and their attempt to pass messages away from the sports side.

On the other hand, the Spanish national team postponed its official qualification for the second round to the last rounds of the group stage, after it tied against Germany with a goal for one, in the strongest summit in the first round of the World Cup finals.

The Spanish national team was ahead by Alvaro Morata, in the 62nd minute, before the Germans equalized in the 83rd minute, by Folkorg.

The European teams will have to win the last match, in order to reach the second round.