[NHK] A new professional baseball DeNA player was announced to join the team, and Shion Matsuo of Osaka Toin High School, who ranked first in the draft, said, "I want to take a regular catcher... 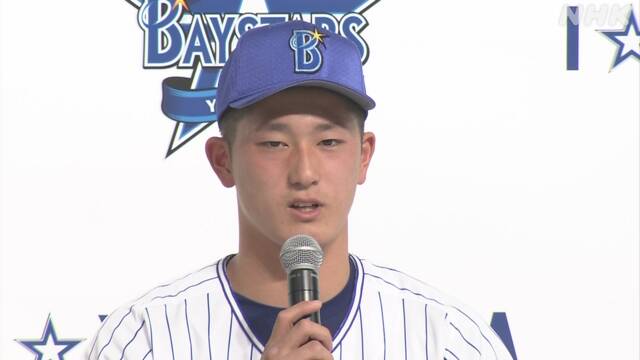 Professional baseball DeNA new players were announced to join the team, and Shion Matsuo of Osaka Toin High School, who was the first draft pick, said, "With the goal of being a regular catcher, I want to stand shoulder to shoulder with great seniors. I want to do my best," he said enthusiastically.

The announcement of DeNA's new players joining the team was held at a hotel in Yokohama city, with 10 players including training players nominated at this year's draft meeting, and director Daisuke Miura.

Of these, Matsuo, who was drafted 1st, is a catcher who has a reputation for his batting that combines slugging power and competitiveness, as well as defense that makes use of his strong shoulders and footwork.

Matsuo, who wore the number "5" uniform worn by coach Takuro Ishii and others during his active career, said, "I felt like I was joining the team again wearing the uniform. Yesterday, I greeted the players. I received it, but it was accepted in a soft atmosphere, so I was happy."

Also, regarding his own appealing points, he said, "I think my strengths are speedy play and aggressive play, so I want to bring those aspects to the forefront."

On top of that, he enthusiastically said, "I want to do my best to stand shoulder to shoulder with the great seniors, with the goal of being a regular catcher."

Beginning in the new year, the new players will conduct joint voluntary training to prepare for the spring camp starting in February.

Enthusiasm of each new player

Pitcher Mitsuki Yoshino of Toyota Motor Corporation, who was second in the draft, said, "My strength is in pitching with spirit, so I want to pitch with all my heart regardless of whether my condition is good or bad, and aim for the opening first team. Also, Yakult, a junior in high school. I want to play against Murakami of .

Takuma Hayashi of Komazawa University, who was drafted 3rd, said, "My speed is my specialty, so I want to put it in the front and play in a way that contributes to the win. I also want to become a player who has all the triple threats like coach Takuro Ishii." I talked to

Rudai Morishita, a pitcher from Kyoto Kokusai High School, who was ranked 4th in the draft, said, "I think that winning as a pitcher is the most important thing, so first of all, I want to be a pitcher who can build a solid body and stably win double digits every year. I want to be,' he said.

Keio University pitcher Tatsuya Hashimoto, who was ranked 5th in the draft, said, "My strength is forkball, so I'd like to improve the quality of my straights while polishing my forks. Did.

Shikoku Island League's Ehime Mandarin Pirates player Ryota Joko, who ranked first in training, said, "I want to gain control as soon as possible with my shoulder strength and long-hitting ability, and aim for the opening 1 team as a catcher who can hit." I talked to

Ren Suzuki of Shiga Gakuen High School, who ranked second in training, said, "Just because I'm in the position of training doesn't mean I'm going to take my time from now on. I talked to

Ruto Konno, a pitcher from Oshiojiri High School in Tokyo, who ranked third in training, said, "Since control is a weapon, I will show pitching like a precision machine and have it registered under control as soon as possible, and in the future it will be a rotation. I want to do my best to get in," he said.

Akitaka Watanabe, pitcher of Ibaraki Astro Planets in the BC League, ranked 4th in training, said, "Since I joined the team from an independent league without graduating from high school or university, I will do my best to get under control as soon as possible with my angular form as a weapon. I want to," he said.

Pitcher Haruto Kusano of Shohei High School attached to Higashi-Nippon International University, ranked 5th in training, said, "My goal is to be registered under control. My goal is to become a highly complete pitcher, so I can play straights and breaking balls in a wonderful environment. I want to grow," he said.