Serbian coaches in our league: the experience of Croatia 2018 can be repeated

Coaches from Serbia in the ADNOC Professional Football League revealed that their country has chances in the FIFA World Cup Finals "Qatar 2022", despite the loss it suffered in the first round against Brazil with two goals to nothing, stressing that five factors would fly up 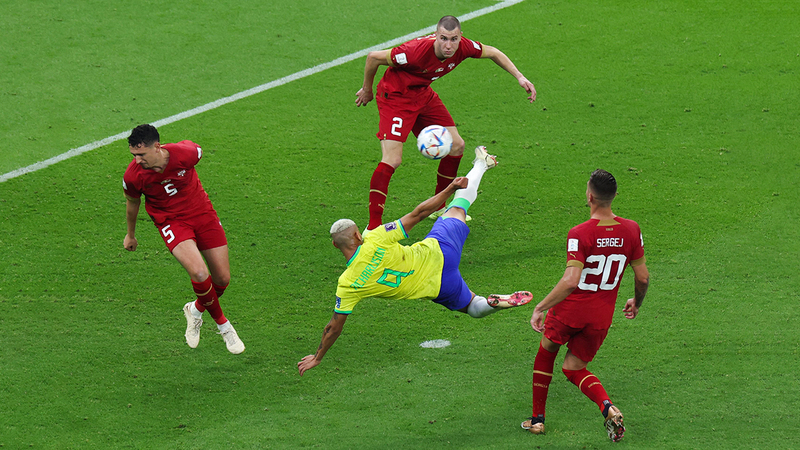 Despite the defeat from Brazil in the first round

Serbian coaches in our league: the experience of Croatia 2018 can be repeated

Coaches from Serbia in the ADNOC Professional Football League revealed that their country has chances in the FIFA World Cup Finals "Qatar 2022", despite the loss it suffered in the first round against Brazil with two goals to nothing, stressing that five factors would It raises Serbia's chances of competing for one of the two qualifying cards for the second round, most notably: professional players in European leagues continue to distinguish themselves, and continue to feel highly confident after their superiority over strong teams, including Portugal during the World Cup qualifiers, not suffering sudden injuries, high concentration and benefiting from the experience of Croatia in World Cup 2018, respect for the capabilities of all teams and a good start against Brazil.

The former coach of Dibba Al-Fujairah, Zoran Popovic, said: “Serbia's match with Brazil was of a high level, and it witnessed the highest levels of tactics, whether in the technical or physical aspect, and in the accuracy of reading the match every minute, and Serbian players and the public must not lose hope when they play a team with this. Power and potential.

He added: «Everyone remembers how the Croatian national team reached the final of the World Cup Russia 2018, so we hope that the players of the national team will be in full fitness and quality, and that we will go far, provided that the quality of all the teams is respected, which can be the fat material in the tournament, and finally, the Serbian national team defeated On many teams in the past six months, including Portugal led by Cristiano Ronaldo, and everyone talks about Serbia in the World Cup, and we hope to present a surprise as Croatia did previously.

For his part, Al Dhafra coach, Serbian Aleksandar Veselinovic, said: “I wished that the Serbian national team had come out with a tie result, but it was not easy to face Brazil while he was playing at this wonderful technical level, and despite that, I can say that Serbia lost the result, but it confirmed Through the tactics that Brazil faced, it is able to continue the campaign, despite the difficulty of the next two matches with Cameroon and Switzerland.

He added, "The Serbian tactic was distinguished in defense and response to attacks, and in limiting the speed of the Brazilians, and it is really surprising that the bench for the (samba) team is as strong as the basics."

And he continued: «Football results remain dependent on the current conditions of each team, and we play in a strong group, but we as a team appear distinguished in this period, especially with the presence of distinguished players, including Flahovic and Kostige who play with Juventus, and Savic who plays in Lazio in the Italian League. And also Tavic, who plays in Dutch club Ajax, and Mitrovic in Fulham, England, and other distinguished people.

And when asked who is expected to be the world champion, he said: “The competition will intensify between the teams of Brazil, Argentina, France, Spain, England, and perhaps the Netherlands.”

In turn, the Ajman coach, the Serbian Goran, described the high spirit of the Serbian national team, and the determination that led them to qualify for the World Cup finals, which would help them overcome the result of the loss from Brazil, especially since the Serbian national team appeared well in confronting the heavy attacks and difficulty launched by the Brazilian players. He said, "I think that the audience in the world watched a beautiful and tactical match of high caliber, and I am optimistic about Serbia's ability to qualify by defeating Cameroon and Switzerland, and to continue the journey and be a prominent team in the World Cup competitions."

He added, "We are optimistic that the Serbian national team will be able to pass the group stage, although optimism is not enough, because its group is not easy, along with Brazil, Cameroon and Switzerland."

2- Investing in the high confidence gained from the World Cup qualifiers by defeating Portugal.

3- Not to be exposed to sudden injuries.

4- High concentration and conviction of Croatia’s experience in the 2018 World Cup.

5- Respect for the capabilities of all teams and a good start against Brazil.