Injuries hit 4 teams, the most dangerous of which was Al-Shahrani

Injuries struck the ranks of four teams participating in the first round of the World Cup currently being held in Qatar. French Lucas Hernandez, Saudi Arabia's Yasser Al-Shahrani, Brazilian Neymar and Iranian goalkeeper Ali Reza were unlucky and left the stadium to receive treatment. 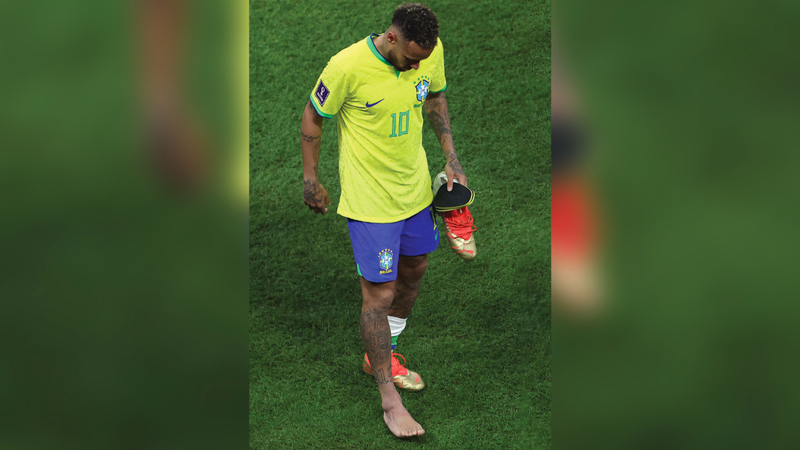 Ajman Doctor: It is not a phenomenon that can be monitored.. and the World Cup was held at the best time for the players

Injuries hit 4 teams, the most dangerous of which was Al-Shahrani

Injuries struck the ranks of four teams participating in the first round of the World Cup currently being held in Qatar. French Lucas Hernandez, Saudi Arabia's Yasser Al-Shahrani, Brazilian Neymar and Iranian goalkeeper Ali Reza were unlucky and left the stadium to receive treatment. Some of them will not complete their dream in the World Cup.

The French national team received a strong blow, injuring its defender Lucas Hernandez by cutting the cruciate ligament during his participation in the Australia match in the first round of the World Cup. The magnitude of the problem for the French national team's coaching staff, especially after France's national team striker Karim Benzema was forced to leave the roosters' camp in Doha, days before the start of the world wedding, after medical examinations confirmed that the player was suffering from a torn left thigh muscle that prevented him from participating with his country's national team in the World Cup.

The news of the exclusion of the “best player in the world” in 2022 was a great shock to the French fans and to the player himself, especially as he was looking forward to recording his second participation in the World Cup finals after the 2014 World Cup in Brazil.

As for the second injury in the World Cup, it was violent, to the defender of the Saudi national team, Yasser Al-Shahrani, who suffered a severe injury during the match against Argentina, which ended with Al-Akhdar’s historic victory over the “Tango” team 2-1. To fall instantly without any movement.

Al-Shahrani could not get up to be taken out on a stretcher and travel to the Saudi capital, Riyadh, to undergo surgery, which was successful.

In the same way, Iranian goalkeeper Ali Reza suffered a broken nose and a concussion while participating in his country's match against England, after he collided with his colleague Majid Hosseini in the first minutes of the match, forcing Portuguese coach Carlos Queiroz to replace him.

It is certain that Alireza Beiranvand will not participate with his country in its next match against Wales in the second round of the group stage.

And the fourth injury hit the Brazilian national team after its captain, Neymar, was forced to leave the stadium, affected by the injury that was evident on his foot, with a large bruise that would prevent him from participating in the Switzerland match.

For his part, the doctor of Ajman Club, Dr. Tariq Sadiq, confirmed that the injuries that occurred in the first round of the World Cup do not constitute a phenomenon that can be monitored from a medical point of view. With each other, or as a result of a sudden movement that resulted in a cut in the cruciate ligament, and these things happen in matches.

He added, "It may be possible to say that if the injuries are muscular, we explain them with excessive fatigue or lack of good preparation for the tournament, but the players participate in the World Cup after a period of playing matches in the local league or in continental club tournaments such as the Champions League."

He explained: «If we go back in memory a little, specifically after the resumption of football activity after the Corona pandemic, we will find that most of the injuries that players were exposed to, whether in the UAE league or in other leagues, were muscle injuries as a result of the return of activity after a long period of negative rest that he obtained. The players, and therefore it cannot be said that there are similarities between the injuries that occurred after the Corona pandemic and those that occurred in the World Cup.