France is the first to cross, and Messi revives Argentina's hopes... Harvest of the seventh day of the World Cup "Qatar 2022"

The French national team became the first to reach the round of 16 of the 2022 World Cup, after achieving its second victory in the competition at the expense of Denmark, while the Tunisian and Saudi national teams were saved by losing, so that their chances of reaching the second round diminished. 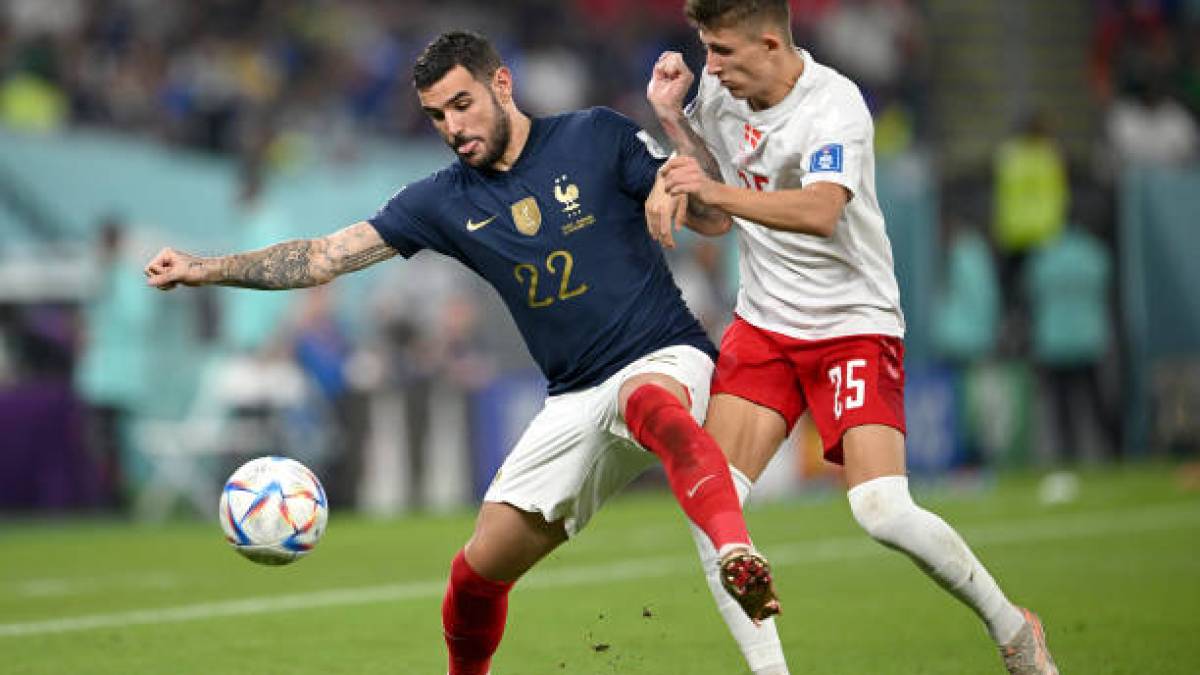 The arrival of France, the 2018 World Cup holders, to the final price of the World Cup “Qatar 2022” was the highlight of the seventh day of the tournament, during which 4 matches took place in the second round of the third and fourth groups.

After its victory over its Danish counterpart (2-1) in the second round of Group D competitions that took place on Saturday, the "Roosters" team became the first to qualify for the second round of the World Cup, while Tunisia and Saudi Arabia were saved for the first defeat for both of them, respectively, against Australia and Poland.

And in the third group, Lionel Messi saved the Argentine national team from a perilous fate when he led it to a difficult victory at the expense of Mexico, which enabled him to redistribute the cards in the group, and restore his chances of qualifying before meeting Poland on Wednesday, November 30, in the last round.

Mbappe fly cock for the second round

Before the start of the Qatar World Cup, France was the team that suffered the most from the specter of injuries, which forced its most prominent pillars, led by the best player in the world 2022, Karim Benzema, and his colleagues Ngolo Kante, Paul Pogba and Christophe Nkunko, and later Luca Hernandez to be absent from the global event, but the coach’s battalion Didier Deschamps steadfastly continued the campaign to defend her title by defeating Denmark on Saturday evening (2-1), making the French team the first team to reach the final price, after raising its tally to 6 points from two consecutive victories, leading its group.

The last 3 editions of the World Cup witnessed the exit of the defending champion from the first round, as Italy left the World Cup 2010, Spain the World Cup 2014 and Germany the World Cup 2018 from the group stage, which prompted many observers to expect France to leave, especially in light of the concern about injuries among its players, but Mbappe and his colleagues They violated that rule and succeeded in continuing their way to reach the final price, one round before the end of the first round.

Kylian Mbappe scored France's double, to lead the roosters to the next round, and he rose to the top scorer of the current version, equally with the Ecuadorian national team striker, "Valencia", with 3 goals.

Mbappe raised his score to 7 goals in the World Cup, after he scored 4 goals in the last edition, which was hosted by Russia and crowned by France, including a goal in the final against Croatia.

The specter of exclusion hangs over the "Carthage Eagles"

And the fourth group competitions started with a confrontation that brought together the Tunisian national team with its Australian counterpart, and expectations indicated that Tunisia would win due to the remarkable level with which it appeared against Denmark, but the "Carthage Eagles" disappointed their fans, with a poor performance and a deserved defeat with a goal for free.

The task of the Tunisian national team in advancing to the second round was complicated, as it must beat France, the 2018 champion in the last round, and it will also be required to wait for an almost miracle in the calculations of the last round to maintain its hopes of qualifying.

Australia takes the lead with a goal through Mitchell Duke, from a header that hit goalkeeper Ayman Dahman.# Qatar 2022 |

And at the South Stadium in Al-Wakra region, the Tunisian national team loomed with a pale performance and without offensive solutions, leaving the possession to Australia, which revived its chances of accompanying France to the final price round after it had suffered a heavy defeat (4-1) at the start of its career in the World Cup.

The defeat of the Carthage Eagles sparked a wave of anger in football circles in Tunisia, while most critics attacked coach Jalal Al-Qadri, considering him the first reason behind the defeat that threw Tunisia's fortunes into the wind.

The seventh day was not Arab

The luck of the Saudi team in the third group was not better than that of Tunisia, where Salem Al-Dosari's teammates suffered their first defeat in the World Cup, against Poland with a clean double, so that the Saudi green balance was frozen at 3 points, while Poland rose to first place with 4 points.

The match witnessed the star of Poland and its captain, Robert Lewandowski, scoring his first goals in the World Cup, when he received a ball in the second half that was fouled by Saudi goalkeeper Muhammad Al Owais, to double the score and go on to win his first country in the World Cup.

And if Lewandowski scored his first goal in the World Cup, the star of the Saudi national team, Salem Al-Dosari, who led the “Green Falcons” to a historic victory last Tuesday over Argentina, was unable to equal the number of his compatriot Sami Al-Jaber as the best Saudi scorer in the history of the finals, with 3 goals.

Al-Dosari scored a goal in the 2018 World Cup in Russia against Egypt, then a second goal in the current version against Argentina, and he had the opportunity to score his third goal in the World Cup and equal the achievement of Sami Al-Jaber, but he missed the penalty kick that the Saudi team got and the Polish goalkeeper "Chesney" managed to score push it back

The Saudi national team must win the third round match against Mexico, or draw and wait for the result of Poland and Argentina to decide the fate of qualifying for the second round.

Messi is always the savior

The specter of early withdrawal haunted the Argentine national team, one of the candidates to bet on the World Cup title, until the 63rd minute of the second round match against Mexico today, Saturday, before its star Lionel Messi took over the task, and scored a first goal, and his colleague Fernandez scored a second goal in the 87th minute, so that the team succeeded. Tango to come out with a valuable victory from a situation that was not easy and revives its chances of qualifying for the second round.

Messi took advantage of a pass from Angel Di Maria to confuse the Mexican defense and go on his second goal in the current edition of the World Cup and the eighth in all his participation in the World Cup.

And the Argentine national team occupies second place with 3 points, equal to the Saudi national team, but the goal difference gives Messi's colleagues precedence in the qualification calculations when equal points at the end of the first round.

Despite the victory over Mexico, whose score froze at a single point in the last place of Group D, the Tango team will be faced with the need to beat Poland in the third and final round to avoid further complicating the calculations on the way to qualifying for the second round.