World-2022: Brazil makes a success of its entry against Serbia with a double from Richarlison

Brazil successfully entered the 2022 World Cup by beating Serbia (2-0) on Thursday at the Lusail stadium in Doha. The Seleçao, which struggled to find flaws in the Serbian defense, ended up doing… 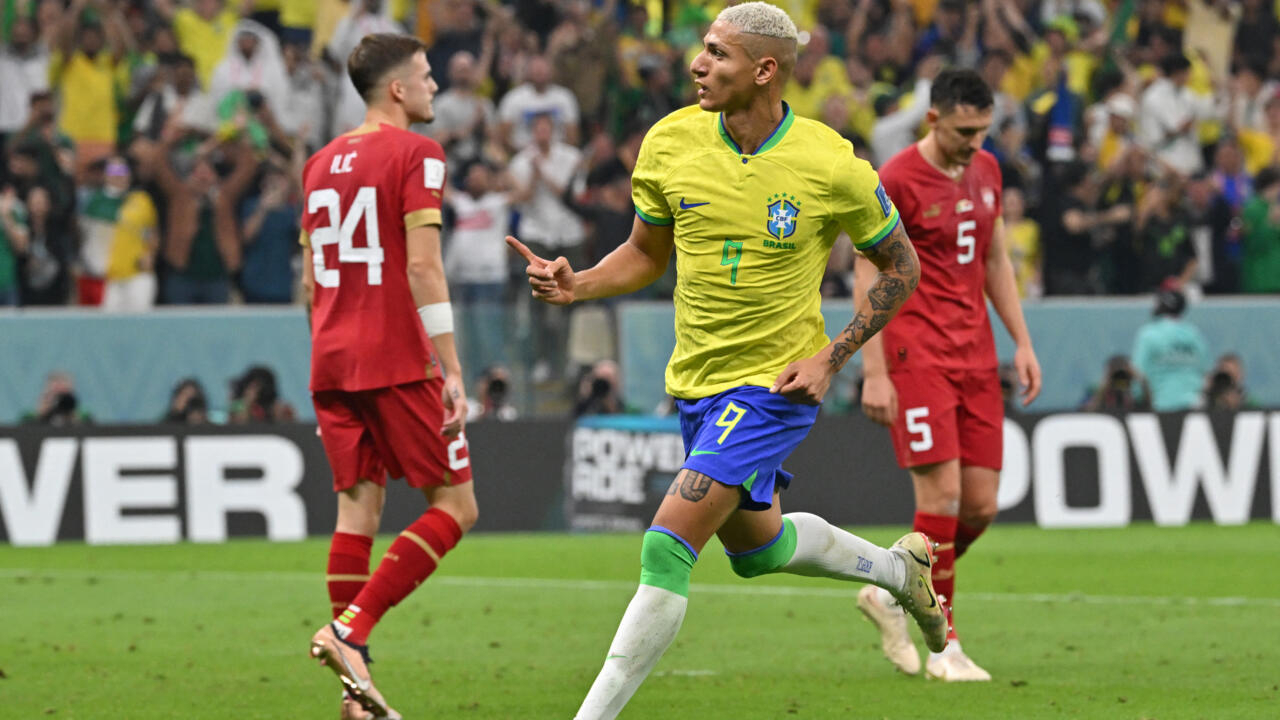 First game for Brazil in the World Cup-2022 and first victory.

The Seleçao managed to find the key to the padlock of the Serbian defense (2-0), Thursday, November 24, and started the competition with three points thanks in particular to their striker Richarlison.

The Seleçao starts in 4-2-3-1 with its quartet Neymar, Raphinha, Vinicius Junior and Richarlison.

The Serbs, meanwhile, are positioned in a 5-3-1-1 formation with Mitrovic up front, supported by Tadic.

At the start of the match, Serbia did not suffer from the game of the Seleçao and did not hesitate to go to a duel, like Pavlovic prematurely warned (7th).

But Brazil are able to project danger quickly: all it takes is a dazzling pass from Casemiro for Neymar, in the opposing box, to try to dribble past all the Serbian defenders... but the ball is finally cleared (10').

The danger can also come from a set piece: Neymar tries to deceive the opposing goalkeeper on a returning corner (14th), which forces the latter to release his fist for a corner.

The second shot does nothing.

The first quarter of an hour of this match is generally balanced between the two teams, even if the Seleçao has the capacity to pack the game at any time with its offensive quartet.

The Brazilians are struggling for the moment to break through the Serbian lock, with the Eagles solid defensively.

Casemiro tries a shot at mid-range but caught without worry (21st).

The match gradually drops in rhythm, with Brazil failing to show its speed and Serbia dominating most of the duels.

So the Seleçao must be satisfied with flashes to hope to weaken their opponent, as when Silva launches Vinicius alone in the axis … but Milinkovic-Savic intervenes with his fist on the ground and clears in touch (27th).

Three minutes later, Raphinha is found in depth but this attempt does not work (30th).

Brazil still stumbles on a well-established Serbian block, even if Raphinha still manages to find a fault by appearing at the entrance to the Serbian surface.

His shot is finally stopped without worry by the opposing goalkeeper (35th).

The Seleçao, despite some promising accelerations, struggled to put their opponent in difficulty during the first half.

Even Vinicius was unable to take advantage of a rare defensive error from his opponent to frame (41st).

The two teams logically return to the locker room with a draw.

The second period restarts with a big opportunity for Brazil: on a bad Serbian recovery, Raphinha comes alone against Milinkovic-Savic, but the Serbian goalkeeper remains unmoved and deflects the ball (46th).

Then Neymar decides to accelerate: Gudelj tackles Neymar at the entrance to his area and is warned.

The Parisian striker transforms the free kick … deflected into a corner by the wall (50th).

Raphinha is then close to finding himself alone to strike on goal, but Pavlovic clears the ball on an impeccable tackle (53rd).

Brazil multiplies the accelerations at the start of the second period, making the Serbs more feverish.

And the danger is getting closer, as in this action where Vinicius finds Neymar in the area … but the latter unscrews his volley (55th).

The Seleçao believe to unlock the scoreboard shortly after, but Sandro's floating shot from 25 meters ends on the Serbian post (60th).

And what had to happen happened: Vinicius strikes, Milinkovic-Savic deflects in his axis and Richarlison emerges in fox from the surfaces to open the scoring in the empty goal (62nd, 1-0).

Brazil logically concretizes its good start to the second half.

Serbia will have to expose themselves to come back to score but lack precision, as on this header from Pavlovic following a corner (69th).

A minute later, another corner for the Serbs and heat stroke this time in the Brazilian area which struggled to clear the ball... but the Seleçao ended up breathing without having conceded a goal (70th).

Serbia will not have time to pick up the score as Brazil takes off ... and how!

Richarlison doubles the bet (73rd, 2-0) by scoring one of the most beautiful goals of this World Cup: served in the box by Vinicius, he continues with a control to keep the ball in the air then with a half-volley aerial unstoppable.

But there are still ten minutes left, and the Seleçao do not seem determined to manage their lead.

Casemiro arrives full axis and sends a curled shot in the opposite skylight.

The Serbian cross repels his attempt (81st), but the 3-0 was not far away.

Rodrygo (82nd) ​​then Fred (83rd) also go there with their strike, but Milinkovic-Savic saves his own.

Rodrygo then tries another curling shot (87th) but it narrowly escapes the frame.

This end of the match looks like a knockout for Serbia, and even if the score does not move in the end, the Seleçao can be satisfied with their evening: the essentials have been assured.