The intrahistory of the red color that the national team wears: from the suggestion of FIFA to the knowledge of Luis Enrique

In these times where marketing swallows up feelings and tradition, sports brands are revolutionizing kits. Both club and national team uniforms.... 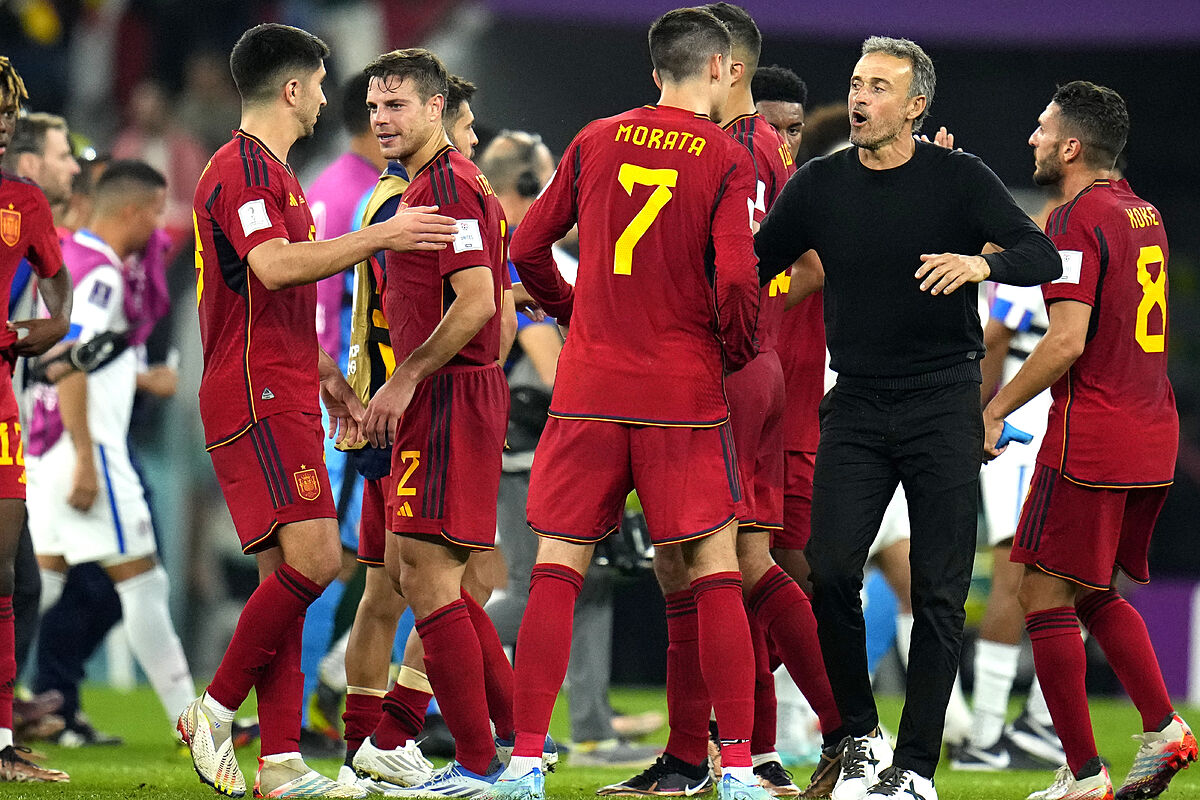 In these times where marketing swallows up feelings and tradition, sports brands are revolutionizing kits.

Both club and national team uniforms.

And in this World Cup, the second outfits of Mexico or Argentina, also that of Spain, have their own.

What has not happened until now (or at least there is no record in the newspaper library) is that a coach, nor a national coach, in this case Luis Enrique, champions the chromatic metamorphosis of a team.

At least that is how it has been understood from the doors to the outside of the University of Qatar, where today Spain rests on its day off, before thinking fully about Germany.

Although the matter, that of the red suit from head to toe worn by the Spanish team, has its nuances like everything in life.

It's been night for a long time in the Al Thumama stadium.

Under the powerful light of the spotlights, before the duel against Costa Rica,

contemplates the result of what seems to be his own initiative.

Even a satisfied personal whim.

«I have asked the sports director (Molina) because we are La Roja.

I asked if it could be managed and we will play in full red », he revealed last Tuesday, during one of his nocturnal rations on Twitch.

That was the (more or less) official version.

But there is a lot behind that red bet.

Everything starts with a suggestion from FIFA, which is the same one that has been made to all the participants in the championship.

To improve the effect on television, they propose chromatic uniformity to Spain.

, sports director of the RFEF, who conveys it to the coach.

In any case, it is a simple recommendation.

To cite a few cases, France, Germany or Japan, who wear the same brand, rejected the proposal and decided to jump onto the pitch with their classic combination.

But red does not only excite the coach.

, president of the Federation, is also in favor of always playing with that color.

So, the metamorphosis ends up being the result of a slow and directed process, which Luis Enrique wields as his own flag.

He is convinced that wearing that shade, perhaps out of superstition, can be a guarantee to win the title.

The memory of Wembley... and Tassotti

It hasn't mattered that the sports firm that dresses them has opted for the red shirt and navy blue pants (and/or socks) in their promotional campaign.

And that point of superstition has not been any obstacle either.

Before Wednesday's historic win against Costa Rica, Spain dressed like this for the last time in the 2014 World Cup. It was against Chile, in the Maracana, and it ended in tragedy.

The then world champion was eliminated when some teams were still digesting their debut in the competition.

"In the end you leave the competitions playing more in white than in red," Luis Enrique sighed on Tuesday from his

The coach still had that damn penalty shootout nailed down at Wembley, during the Euro'20 semifinal against Italy.

Or even the memory of his bloody shirt after

's nudge , in 1994. "Hopefully the red will give us the fury and the race to play the three games of the group stage, first, and then four more," he added, in somehow appropriating an idea that did not start in his head.

Although the image of

appears from time to time in the labyrinthine corridors of the Doha metro , without a doubt Luis Enrique is one of the stars of this World Cup.

After each of his Twitch sessions, the same one that is watched with suspicion by those nearby, a debate is generated in the large press room in Doha.

Sometimes, as happened with that geographical error with Costa Rica, by some gazapo.

If playing in red brings luck, surely history will award him that merit.